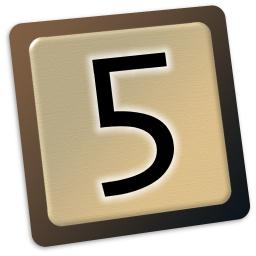 Five-O is your favorite word game, minus the words!
Check out the popular iOS number game, now available on the Mac!

Instead of letters, the tiles are numbers, and instead of forming words, each sequence of tiles has to add up to a multiple of five, and no sequences may be longer than five tiles.

Online Multiplayer
With Game Center turn-based multiplayer, you can take turns at your leisure. Cross-compatible with iOS. Your online matches are synced across all your devices.

Single Player versus Computer
Features three difficulty levels and keeps track of your wins, losses, and other statistics for each level.

"Pass and Play" Multiplayer
Challenge friends and family to a game! You can play with up to four players on one computer.

On each turn, players may play tiles in one straight line sequence, horizontally or vertically. The first sequence must be played on the center square, and all sequences after that must intersect with tiles already in play.

The score for each play is the sum of all the number tiles in sequences completed on that turn. Colored bonus squares award extra points and multipliers.

At the end of each turn, players draw new tiles to replace the ones played. The game ends when a player plays all of their remaining tiles and there are no more tiles left to draw.