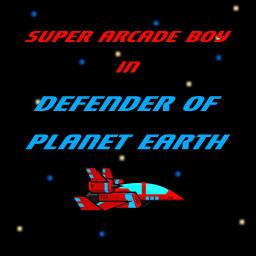 Meet Super Arcade Boy, an arcade champion in the past, and now a planetary freedom fighter. Fly him through 8 levels while defeating waves of enemies and bosses. Have amusing conversations with the aliens you are destined to defeat. Then ultimately save planet Earth from being attacked!

Super Arcade Boy's up to the challenge. ARE YOU?