How much free time does the average working person have per day?

Let's say she gets home from work at 6pm, then prepares something to eat. If she goes to bed at 11pm, that leaves around four hours in the evening. Add in some time on the commute and at lunch, and we might say the average working person has just over five hours of leisure time a day.

In some markets you're probably spending all of that time in apps.

We've just launched our 'daily time spent in apps' report for Q3 2021. It lists Indonesia as the world's most mobile-oriented region. Indonesian users spend an incredible 5.5 hours a day using mobile apps. Notably, the US has reached a new high of 4.2 hours, up from 3.9 in Q2 2021, and the UK at 4.0 hours per day, up from 3.8 in Q2 2021 for the average Android phone user. The average consumer in South Korea is spending 5 hours per day in mobile apps, up from 4.8 in Q2 2021. Users in Japan increased their average daily time spent by 10% quarter over quarter from 4.4 to 4.8 hours in Q3 2021. In Australia, this grew 15% quarter over quarter to 4.1 hours per day as more than half of Australia’s 25 million population went into lockdown in July as a new wave hit the country. 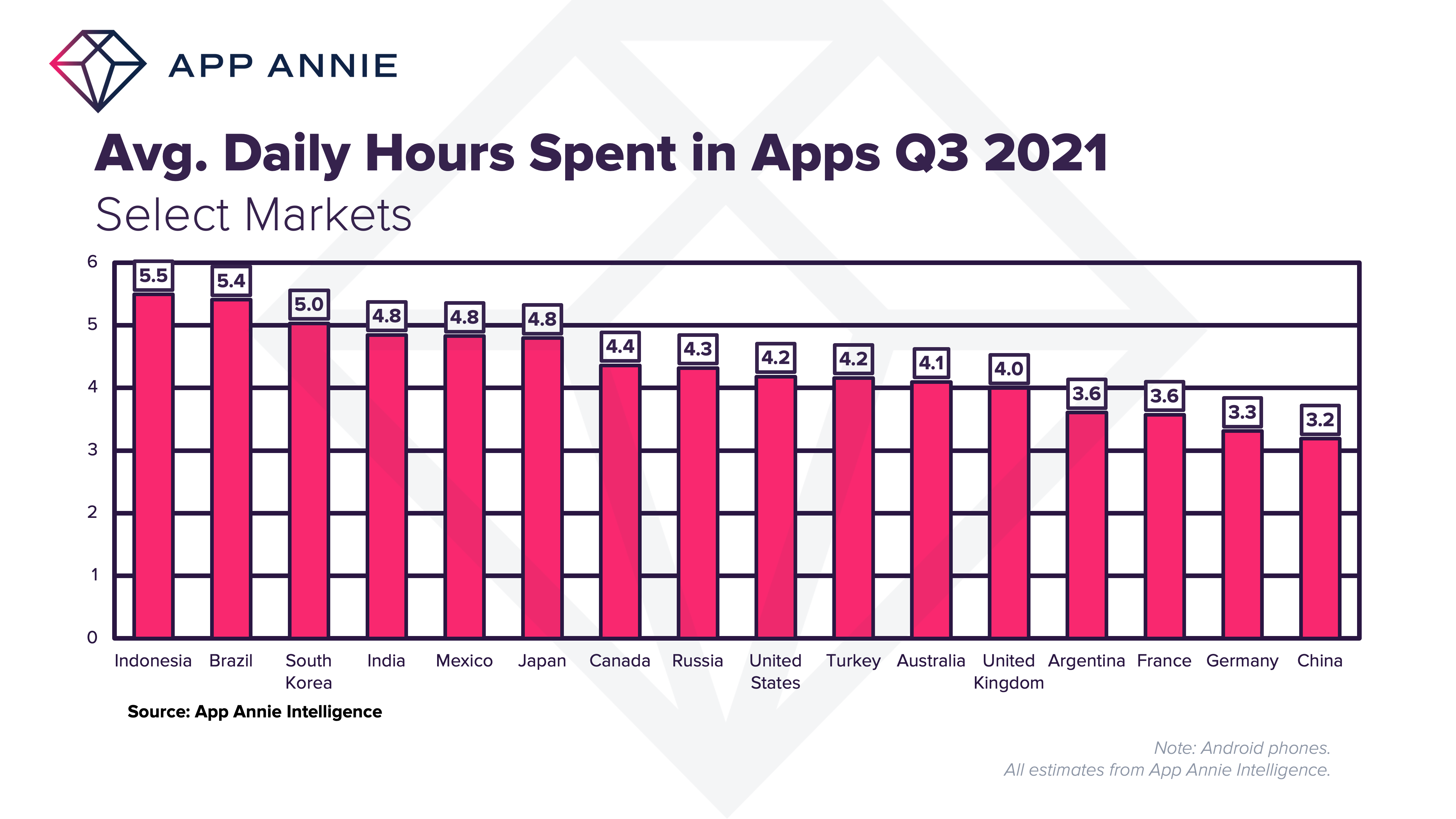 The numbers reveal the 'mindshare' dominance of the smartphone among the world's consumers – especially those in developing countries.

Indeed Brazil, India and Mexico comprise three of the top five on the list (alongside Indonesia and  with South Korea taking the remaining spot).

Meanwhile the data also shows that consumers in 12 of the countries on the 16-strong list now spend more than 4 hours a day in apps. That's up from 8 in the previous quarter.

What a contrast with so-called analogue media. After 60 years of dominance, the TV has been eclipsed. The glory days of the family gathered around the TV set are no more. Stats show daily time spent watching TV declined from 3 hours a day to 2.5 hours in the decade from 2011 to 2021.

If people are spending virtually all their time in apps, it raises one obvious question. Which apps?

One product stands out: TikTok. According to our data, TikTok was the most downloaded app in three of the territories we monitored over Q3 2021. And it was the only app to appear in the top 5 lists of all nine countries. 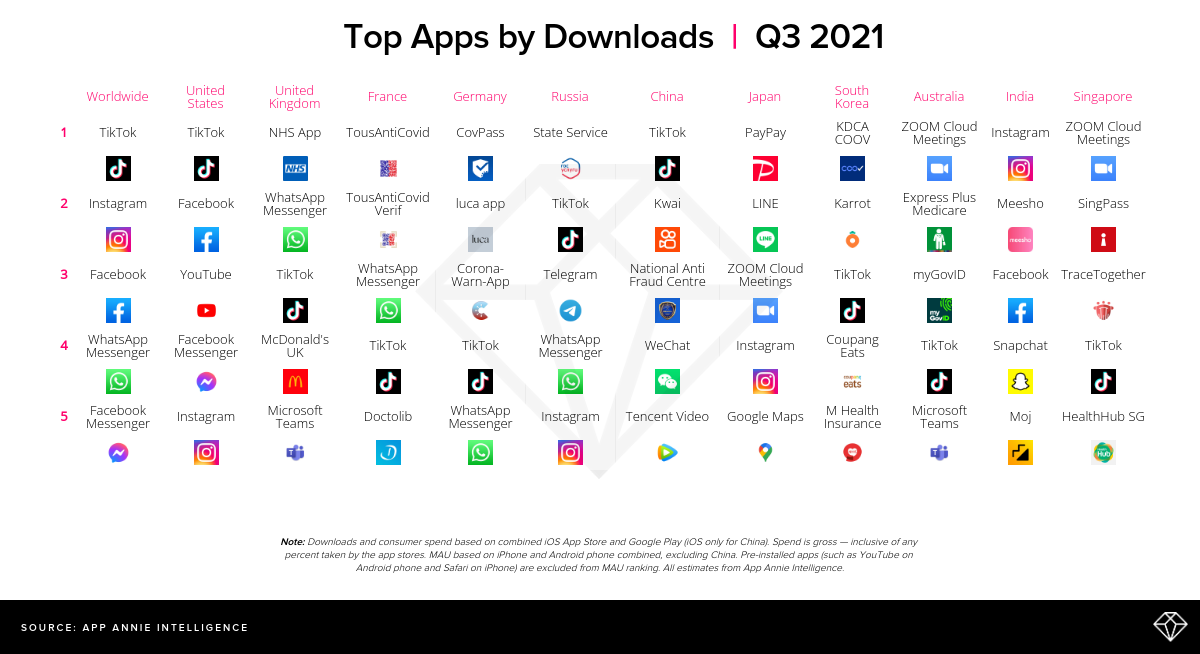 The company's own numbers provide further evidence of its dominance. In September, it announced 1 billion active users, meaning one in eight people in the world use TikTok each month. Last year, we predicted TikTok would surpass 1.2 billion monthly active users in 2021, and we are well on track to seeing this come to fruition.

Elsewhere, the top apps are the usual collection of evergreen social products (WhatsApp Messenger, Facebook, Telegram) and video conferencing tools (Zoom, Microsoft Teams). The other significant cohort is the group of COVID-related apps – Germany's CovPass, France's TousAntiCovid and the UK's NHS App, among others.

It will be interesting to monitor the performance of these apps in the next quarter results now that – thanks to vaccines – many countries have reduced most of their pandemic restrictions.

As usual, the 'breakout apps' chart makes for more interesting reading. It measures quarter over quarter growth rather than absolute download numbers. In other words, it reveals the season's newest hits. 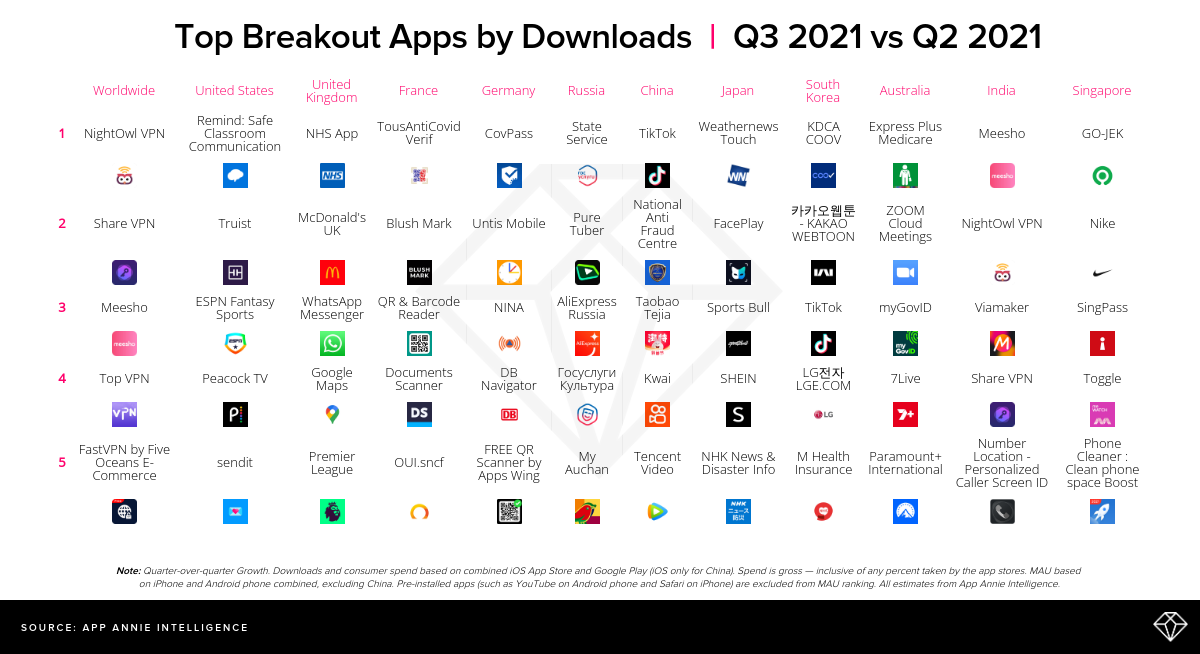 In the US, Remind: Safe Classroom Communication was the #1 Breakout app, followed by Truist, a mobile banking app, ESPN Fantasy Sports and Peacock TV — following seasonality of school resuming, football season kicking off and new streaming content. TikTok was a breakout app in China and South Korea in Q3 2021, along with shopping apps in advance of the upcoming holiday season like AliExpress Russia, SHEIN in Japan and Blush Mark in France.

What Were the Biggest Gaming Hits Around the World in Q3 2021?

We’ve also seen major breakouts in mobile gaming. Globally, My Talking Angela 2 was the top mobile game. Hopes were high for Outfit7’s long awaited sequel, which the company describes as a  ‘Friend Simulation’. The stats suggest the app has delivered. 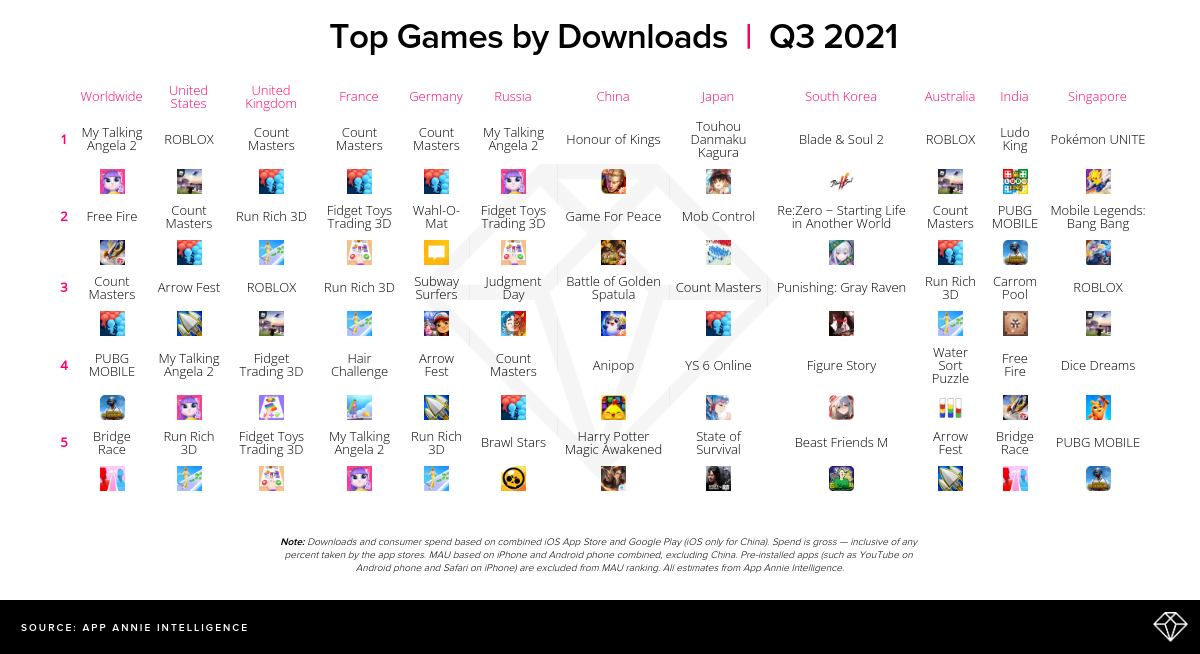 The other outstanding product is Freeplay's hyper-casual Count Masters, which topped the Q3 game download chart in France, UK and Germany. ROBLOX swept the leaderboard for the US —  as the #1 game by all 3 metrics analyzed — downloads consumer spend and MAU, a testament to the popularity of metaverses in mobile gaming. Pokémon UNITE was the #1 breakout game in South Korea by downloads, which is particularly impressive for the Action > MOBA (Multiplayer Online Battle Arena) game given that it only launched on September 22, 2021, meaning it ranked as the #1 breakout game with only 9 days of downloads. 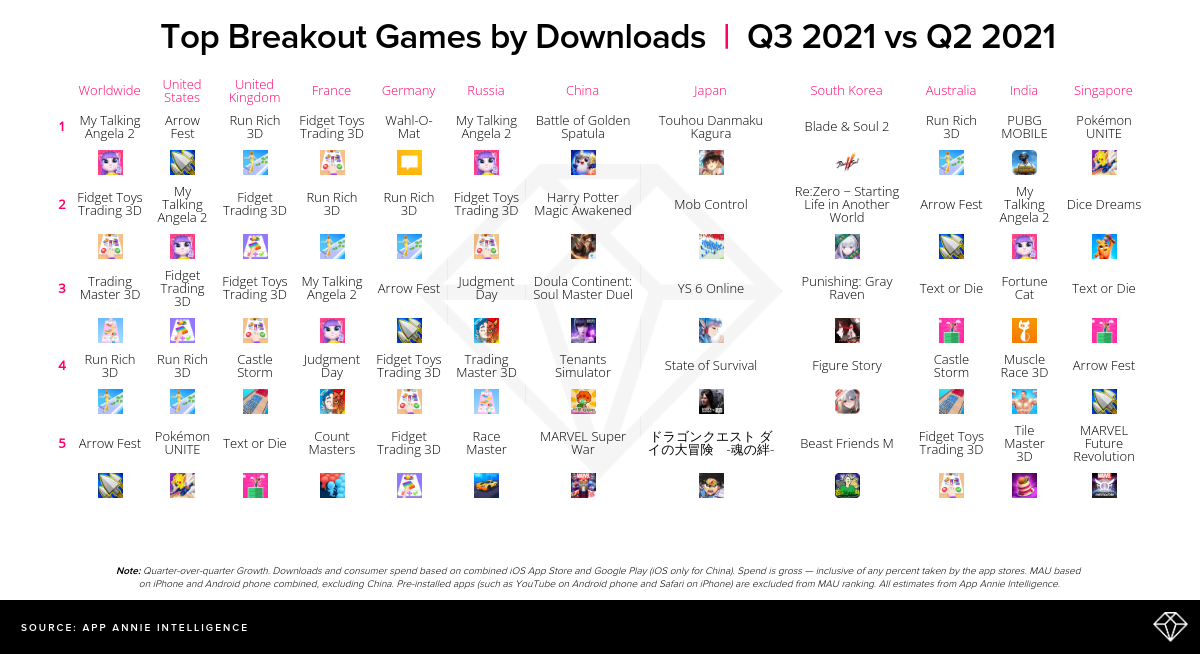 To find out more about the most popular apps and games of Q3 2021 – and their relative performance per regional market – read App Annie’s Q3 2021 Mobile Pulse Top Apps and Games Rankings report now.