ASO isn't just about categories, keywords and ratings — after all, getting users to discover your app is only the first step. You also need to convince those who do find your app to download it.

This often comes down to the creative assets you use in the app stores, primarily your app icon, screenshots and video. Together we call these “creative assets,” and they should form a memorable and effective story that convinces users to take the next step and download.

Let’s get into detail...

Designing creative assets that entice new users to download your app is part science and part art. In general, you want creative assets that are simple, engaging and clear. On the science side, you should experiment to identify which visuals and messages convert the most high-quality users. There may be very small changes that could have a big impact on your campaign.

You’ll also need to consider how your creative choices resonate in different markets and regions. For example, the color red tends to signify danger in the US and happiness in China — so it may not be the best choice for an international app icon design. Be aware that research and testing is a large part of the process, and you may have to tweak subtle elements in your assets to optimize a global user acquisition plan.

The creative assets you develop for your app can be used elsewhere, like on your website, but they will be most effective (and measurably so) in terms of ASO. Let’s look at each asset in more detail.

Despite containing only a few thousand pixels, your app icon wields immense influence. This is the first visual element people see when they view an app store listing. All those pixels have to come together to convey what your app is about, in the simplest manner possible.

Keep It Simple and Scalable. Be aware that the icons will appear in multiple locations and be automatically adjusted to different sizes. Your best strategy for looking good all the time is simplicity. The Cartwheel by Target icon combines the well-known “target” symbol of the Target stores and uses a shopping cart graphic to quickly communicate its main offerings (savings and coupons).

Know the Competition. Is there standard iconography or a color palette that your competitors use? Ideally you’ll be able to signal that you’re both a part of that same set of apps while also standing out from the crowd.

Be Unique and Recognizable. Use your competitive knowledge to stand out. Balancing simplicity with something that stands out is where the art of creativity comes in.

Test, Test, Test. Make sure you love your icon, but also make sure you have user preference data to back up that love. Always test your icon for suitability in the different countries where you will localize.

Don’t think of screenshots as merely showcasing your app’s functionality; think of them as ads that paint an irresistible picture of your product. Each screenshot should highlight a specific benefit and use supplemental text, whenever possible, to help explain key features to the user. A few rules to follow:

Prioritize Key Messaging. Be sure to clearly demonstrate the key functionality of the app.

Use All Available Screenshots. The iOS App Store allows only five screenshots, while Google Play allows eight. Most potential users will only view the first two screenshots because that’s all that’s shown initially, which makes those first two especially important —they should tell the most important part of your story. If a potential user scrolls through the other screenshots, that means they’re truly interested.

Lead Users Through the Story. There should be a flow in the order you place your screenshots. Your goal is to make users feel like they are progressing through a compelling narrative — this also improves your chances of getting them to view more than the first two screenshots.

These screenshots for Tinder give users an overview of how the popular app works, while also telling a visually compelling story about finding a match. In just three screenshots we understand what the app does, how it does it, and who it’s for. 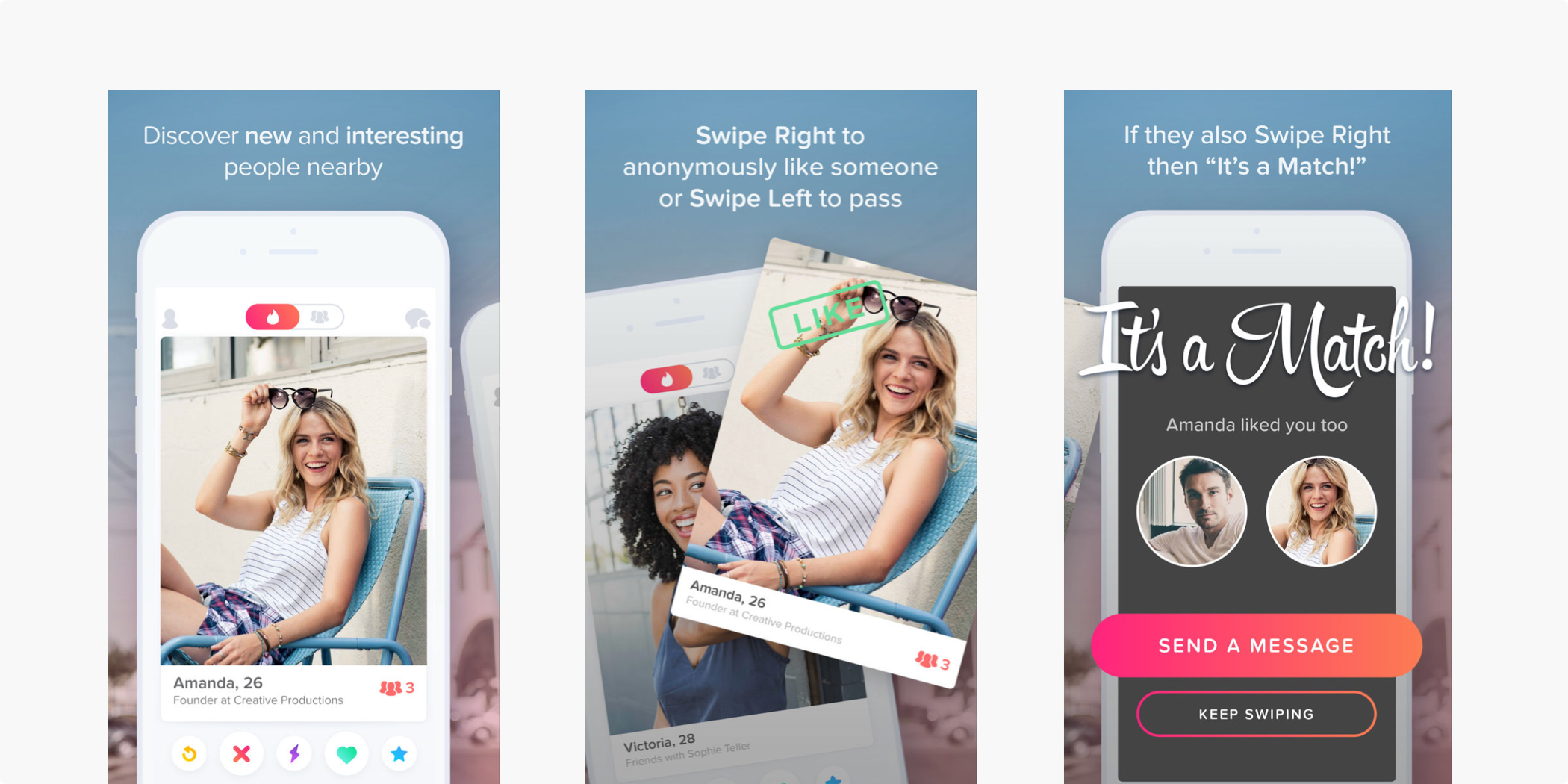 Both Google Play and the iOS App Store allow short videos, and done right, they can really draw people in. Numerous studies show that users are more likely to watch a video than read text.

However, videos are no small investment, so make sure you take these tips into consideration before committing to video.

Be Mindful of Length. The first five seconds are critical, and you want to keep it as short as possible — currently 15 to 30 seconds is the industry standard. Use those seconds wisely.

Focus on Critical Features First. Put the key selling points of your app at the beginning of your video and don’t try to cram in all of your core features. Keep the pace brisk, but not too fast.

Add a Call To Action. At the end of the video, tell viewers what to do next. Whenever possible, remind them to download and start using your app right away.

Keep it Simple With On-Screen Text. Since many viewers will watch with the sound off, highlight key points with on-screen text and avoid distracting effects or transitions.

The personal finance app Mint clearly explains the app's core value proposition, walks through key features, details how and why people should use it, and proactively answers questions. No easy feat in about 30 seconds.

It should go without saying, but be sure to follow all copyright laws and correctly license any images or music when creating screenshots or videos to use on your app store page. Stay on top of all app store rules and guidelines. The last thing you want is to put time, effort and money into some great creative only to have it rejected by the app stores or removed for copyright violations.

Ratings and Reviews: Listen and Respond

This is where you’ll find out what users love about your app, as well as what they hate, want to see improved or wish you offered. It’s one of the few places where you can directly observe users and their feelings, which can be immensely valuable.

In addition, any marketer knows the power of social proof. People don’t want to waste their time downloading an untrustworthy app, so they will look to reviews and ratings to guide their decisions. The more positive ratings and reviews, the more popular and valuable your app will be perceived to be, and the more popular it will become.

Importantly, while you won’t have direct control, there are certainly ways to steer your users in a positive direction.

To optimize for better ratings and reviews, you should:

Pay Attention to What They’re Saying

This should be a no-brainer, but you need to track your rankings and reviews to see how users respond to updates and features. Rankings and reviews are crucial in explaining your app’s performance, and they can uncover improvements that deserve a place on your product roadmap.

In addition to addressing user feedback behind the scenes with adjustments to your product, take the time to show that you’re listening. This can be done through your blog and release notes. In both the iOS App Store and Google Play, you can respond directly to user feedback, which is a great way to prove you care and are listening to concerns. People considering downloading your app will see that your team actively engages with users and is dedicated to making improvements.

One thing to note is that while ratings can change if you address concerns and make fixes, it can take time. Be patient and aim to get a little better every day.

Upon the release of Layout from Instagram, a photo editing app, 11% of its ratings were 1-star. After diligently and directly addressing user feedback, along with making requested updates, it currently has a 4.5 rating in the App Store, thanks to a steady stream of 5-star reviews.

Target High Points in Your App

Improve the likelihood of receiving a positive review by asking for feedback when a user is having a great moment with your app, like when they’ve completed a challenge or key action, or have leveled up.

Another common tactic is to ask for feedback in an in-app survey. If a user provides a low rating, then ask for direct feedback, and if they provide a high rating, ask if they're willing to rate you in the app store. Be aware that you should use this tactic sparingly to avoid annoying and demanding too much from your users.

Consider asking beta users and professional peers to provide honest reviews in the app stores. This is especially important at the beginning of your app’s lifecycle, when you won’t have many (or any) reviews on an app store page. Start with friends and family, of course, but then transition to driving more reviews through some of the previously mentioned tactics.

By staying on top of user responses and optimizing for strong feedback, you may notice a lift in conversions from the app store page. Keep listening, responding, testing, and improving.

In the next topic, we'll move onto the world of app engagement where you'll learn to think beyond the download an build an app that keeps users coming back.