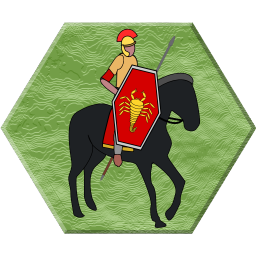 Check out the download rank history for Populus Romanus in United States.

Rank History shows how popular Populus Romanus is in the Amazon, and how that’s changed over time. You can track the performance of Populus Romanus every hour of every day across different countries, categories and devices.

A turn based strategy war game where you lead Roman legions in their conquest of the Italian peninsula. Play various scenarios of the conflicts fought by the Roman Republic; Be the dictator for the Roman civilization at the ancient age when it was yet to become the largest empire in the world.
Populus Romanus has a hex and counter style of play, like many table-top turn-based strategy board games. The game features 14 scenarios of varying size and difficulty, ranging from the initial conquests of neighbouring kingdoms by Roman city-state, to the First Punic War and beyond. There are Single player and Local Multiplayer (players sharing same device) game modes. In-game help guide provides all the necessary information about the game rules and how to play.
The basic gameplay style of this game was inspired by many earlier hexagon based "oldskool" or retro PC strategy games like Fantasy General, Panzer General and Battle for Wesnoth as well as some of the more recent titles, such as Uniwar on mobile devices ... with a little bit of Civilization / Freeciv spirit mixed in. However, the backdrop of the game is set in the ancient Rome, and the game attempts to follow faithfully the known course of the events to the extent that is known to the modern historywriting (some liberties have been taken in interpreting the details to make the game more entertaining). The game has some minor RPG like elements such as unit leveling (success in combat leads first to veteran, then to elite status, giving stats improvements), but at its heart it is first and foremost a pure strategy game.
Nearly two millennia before the era of medieval knights and castles of the European middle ages, the first ancient settlers of the Roman tribe founded the city of Rome. As the legends customarily tell, the twin brothers and townsmen Romulus and Remus were the original founders, with Romulus eventually becoming the first king of Rome. From its humble beginnings first as a small village, and then a local kingdom, its destiny was to become a great empire encompassing all coasts of the Mediterranean sea and even beyond.
The game begins in the very first years of the Roman saga; You, the player, will lead the Roman army, legion after legion, from a battle to another in the name of the Roman Empire against the mighty warlords of the neighbouring realms. Assault the Etruscans on river Tiber, stop the madness of Samnite invasion in Campania, conquer South Italy, drive Carthaginians out from the isle of Sicily, and much more ... May the god of war Mars spare you from the fury and vengeance of your enemies in the battlefield!
While the main campaign of the game deals with the Roman Republic expansion wars, the second campaign is played as commander Hannibal of Carthage, one of the greatest military commanders to ever live, whose brief advance against Rome brought him all the way from North Africa almost to the gates of Rome, before the Romans got their defense lines established. This revival of warfare between Carthage and Rome came to be known as the Second Punic War in the books of history.

Find out what users think of Populus Romanus by reading the reviews and checking the rating.