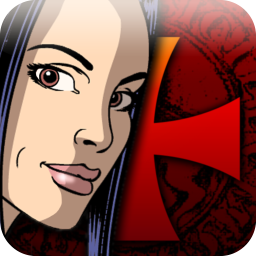 German Language Version.
Paris in the Fall… a brutal murder at the Palais Royale. When Nico Collard is invited to interview statesman Pierre Carchon, she finds herself inextricably drawn into a terrifying conspiracy. One of the all-time classic adventures, multi BAFTA-nominated 'Broken Sword: Director’s Cut' pitches sassy journalist Nico Collard, and intrepid American George Stobbart into a mysterious journey of intrigue and jeopardy. Guide George and Nico on their globe-spanning adventure, exploring exotic locations, solving ancient mysteries, and thwarting a dark conspiracy to reveal the secret truths of the Knights Templar. Featuring a widely-praised touch interface, 'Broken Sword: The Director’s Cut' introduces an intricate new narrative thread, alongside the classic story that has charmed millions of players. It’s time to experience George and Nico’s worldwide adventure in a whole new way, with brand new puzzles, hilarious new jokes, and the distinctive, rich story that made the series so deservedly renowned. This is adventure gaming at its very best. An enhanced version of the iPhone classic, which itself earned an average (metacritic) review score of 91%, the game includes many unique features including a digital version of ‘Watchman’ co-creator Dave Gibbons’s collector’s comic. “…this is a must-play game: a latter day blockbuster in a director’s cut form”. The Independent online (5/5) Full English speech, with the option for subtitles in English, French, German, Spanish or Italian.

Find out what users think of Baphomets Fluch: Director's Cut by reading the reviews and checking the rating.