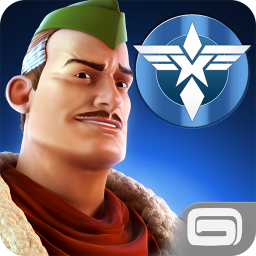 You ready for multiplayer action? Axis or Allies, victory or defeat, mayo or mustard… All will be decided in the ultimate FPS showdown, Blitz Brigade!
Become one of five highly skilled and totally badass classes and team up with other players to pound your enemies into the dirt and call them mean names.
Finally, a true class-based multiplayer FPS game comes to Android!
*****Lock 'n' load for team-based FPS action!*****
GIVE AN ONLINE BEATDOWN!
✓Up to 12 players can battle online in multiplayer games
✓5 classes: Soldier, Gunner, Medic, Sniper, Stealth
✓Control the battlefield in Domination mode
✓Frag everyone from the opposing army in Deathmatch games
✓Use 3 different vehicles for a tactical advantage in battle
✓Fight with over 100 weapons, each made for a specific class
✓Unique taunts and kill phrases for each character in the game
✓Voice Chat to create your game plan in the heat of the action
HONE YOUR KILLER SKILLS IN TRAINING MISSIONS
✓Complete 120 unique action-packed missions
✓Learn to master each class’s specialized battle skills
✓Pilot a Helicopter and rain death from above
✓Hop into a Tank to steamroll the enemy army
*****War games just got a whole lot crazier! *****
For fans of free online action games, class-based multiplayer shooters, first-person shooters, army/war games, or anyone who enjoys a good online fight.
Enter the battlefield, get ready for the war, and enjoy hours of fun!
----
Visit our official site at http://www.gameloft.com
Follow us on Twitter at http://glft.co/GameloftonTwitter or like us on Facebook at http://facebook.com/Gameloft to get more info about all our upcoming titles.
Check out our videos and game trailers on http://www.youtube.com/Gameloft
Discover our blog at http://glft.co/Gameloft_Official_Blog for the inside scoop on everything Gameloft.
*Because of the high quality graphics used on this game, once installed on your device, this title will use 1.29 GB of space.*
Certain apps allow you to purchase virtual items within the app and may contain third party advertisements that may redirect you to a third party site.

Find out what users think of Blitz Brigade - Online FPS fun! by reading the reviews and checking the rating.