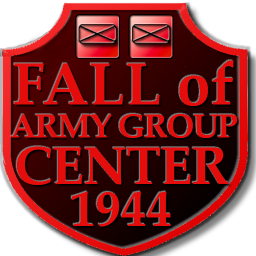 Full version of Fall of German Army Group Center 1944 (Operation Bagration)
In the summer of 1944 the German Army Group Center was completely wiped out after the Red Army launched Operation Bagration - can you maneuver Germans out of the biggest disaster on the Eastern Front?
The key for the success of Soviet Operation Bagration and the resulting destruction of the German Army Group Center was the difference in mobility: The US lend-lease gave the Red Army more trucks than Germany made in the entire war. Suddenly Soviet Rifle divisions moved 200 km per day instead of just 2, any previous experience Germans had fighting the Red Army was now obsolete. Meanwhile German Army Group Center had barely any Panzer or Panzergrenadier divisions left, many units were ordered to sit tight and hold stronghold cities in spite of nearby breakthroughs by Russians, and Soviet air force and partisans limited movement in the rear areas.
End result of this difference in mobility: In less than two weeks, more German men and materiel had been destroyed than at Stalingrad over a year earlier.
FEATURES:
+ Historical accuracy: Scenario mirrors the historical setup.
+ Settings: A plenty of options to alter the gaming experience: Change difficulty level, hexagon size, Animation, choose icon set for units (NATO or REAL) and cities (Round, Shield, Square, block of houses), turn supporting unit types like Generals/Airforce/Minefields ON/OFF, allow Storms and supply depots for combat units, and much more.
If you want to test this WWII game, a free 20-turn version is also available
Privacy Policy (full text on website & app menu): No account creation is possible/required, the made-up username used in the Hall of Fame listings is not tied to any account and does not have password. Location, personal, or device identifier data is not used in any way. In the case of app-crash the following non-personal data is sent (vie web-form using ACRA library) to allow quick fix: Stack trace (code which failed), Name of the App, Version number of the App, and Version number of the Android OS. The app only requests the permissions it needs to function.
Conflict-Series by Joni Nuutinen has offered highly rated Android-only strategy board games since 2011, and even the first scenarios are still actively updated today. The campaigns are based on the time-tested gaming mechanics TBS (turn-based strategy) enthusiasts are familiar with from both the classic PC war games and legendary tabletop board games. I want to thank the fans for all the well thought-out suggestions over the years which have allowed these campaigns to improve at a much higher rate than what any solo indie developer could dream of. If you have feedback about this board game series please use email, this way we can have a constructive back and forth chat without the limits of the store's comment system. In addition, because I have large number of projects on multiple stores, it’s just not sensible to spend handful of hours every day going through hundreds of pages spread all over to see if there is a question somewhere -- just send me an email and I will get back to you. Thanks for understanding!

Find out what users think of Fall of Army Group Center 1944 (Operation Bagration) by reading the reviews and checking the rating.