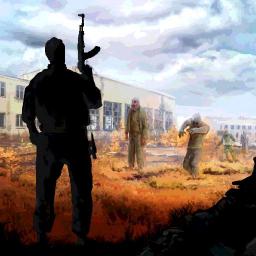 The apocalypse came just the way we expected – with a virus that turns people into walking dead. The city has been wiped out by the hordes of undead ravaging through the streets and now you’re one of the last survivors. Your hideout has been discovered too, so the running game is over – now it’s time to pull out the gun and start extermination. Seize your chance of survival with Zombie Hunter: Gun Battle!
The only way to make it out alive is to land a headshot before the enemy touches and infects you. You shouldn’t underestimate the undead either: they can limp over pretty fast when craving brains! Stay alert and quickly dispose of any zombie that gets too close for comfort – a tap on the screen will fire a shot. The more you progress, the better weapons and cover you get.
Zombie Hunter: Gun Battle comes with:
- One of the most classic and thrilling setups – a zombie apocalypse;
- A fast-paced shooter to challenge your reflexes;
- Flexible gameplay: pick the missions of varying difficulty levels;
- Haunting visuals of a deserted, half-ruined city of undead.

Find out what users think of Zombie Hunter: Gun Battle by reading the reviews and checking the rating.