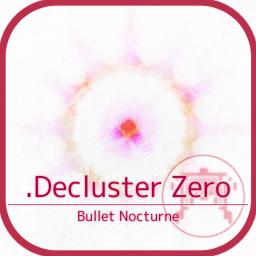 Check out the download rank history for .Decluster Zero in United States.

Rank History shows how popular .Decluster Zero is in the TV Store, and how that’s changed over time. You can track the performance of .Decluster Zero every hour of every day across different countries, categories and devices.

In the game, you'll encounter tons of bullets which are insane. It is impossible to keep dodging, but you can erase the bullets easily.

A main mechanic is 'homing laser' with CANCELING enemy bullets around your ship. It requires gauge, but easy to fill.

You should use the homing laser aggressively and it is the best way to defeat enemies. Moreover, there is a mechanic which slows down bullets around your ship in order to dodge them easily.

Are you interested in this game? You can watch user's replay videos on Everyplay:
https://everyplay.com/-decluster/videos

You can also watch them in this app. Tap 'EVERYPLAY' button on the title screen. (The lite version also.)

.Decluster Zero is a remix version of bullet-hell shooter '.Decluster: Into The Bullet Hell'. With many remixes and new features: remixed soundtracks, modified mechanics, redesigned levels, and more.

#2 MECHANICS
- Expanded homing laser system
- Touch and hold a second finger...
- Bullets around the player are slowed down (Capture Mode)
- New scoring system
(Homing laser basics are the same as before: requires meter and cancels bullets.)

Find out what users think of .Decluster Zero by reading the reviews and checking the rating.