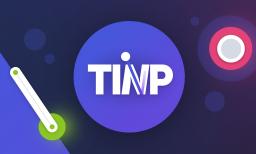 Check out the download rank history for TINP - Multiplayer Arcade in United States.

The gameplay is simple: two paddles compete each other by
trying to put the bouncing ball into the adversary’s net and the first player that scores 5 points wins the game.
In each match the ball slowly accelerates and the game becomes more frenetic until a point is scored. By touching the ball with the edges of the paddle, a player can launch a fireball that moves much faster and is harder to catch.

The game also features lots of special modes, that randomly activates during the game and adds variety during the matches:
* Huge ball Mode: The ball starts as really huge… but after a bit it transforms to a tiny ball for a couple of seconds
* Multiball Mode: Only a ball is the real one, the others just add chaos
* Invisible Ball Mode: The ball becomes invisible for one second, enough to confuse the players that have to predict the contact point
* Rotation Mode: The table starts to rotate randomly
* Flip Mode: The table flips vertically and the commands are inverted
* Secret Nyan Cat Mode: Secret Nyan Cat Mode??!?
* Much more…

The game supports multiplayer with the Apple Remote and MFI controllers, but also supports playing against the computer AI.

Find out what users think of TINP - Multiplayer Arcade by reading the reviews and checking the rating.