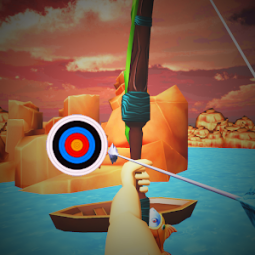 Archery Hero is the most exciting first-person-shooting archero game. Play one of the most popular modern sports games in the Olympics. Archery hero is simple yet addicting game play, giving you thrilling moments and an unexpected experience. With superior acrobatic and deadly weapons, you are ready to face menacing traps and enemies who have sworn to protect. Can you survive as shadow ninja warrior hero in kingdom fight super hero game 3D?

With new free Archer Shooting and counter sniper shooting free game Pull your ultra-realistic archery Bow and arrow skills in new free game of counter archer shooting and save your city where you can play a role of modern assassin archer, from the city thugs and mafia that siege your city.

Archery Hero is a 3D first-person-shooter game for archero ace! The gameplay is very simple, just use your bow and arrow to aim and shoot a variety of targets to get higher scores. Be the super ninja hero saga and take epic revenge from deadly castle enemies who are trying to escape the castle samurai rising sword and superhero martial arts fighting skills. Sharpen your shuriken and throw towards rivals with your perfect shadow ninja archery targeting skills. Equip yourself with your bow and arrows and do not show mercy to caption guards or armed soldiers.Take aim with your bow & throw arrow to kill your enemies from long range.

Be the super ninja hero in this samurai ninja survival war game 2021 by fighting with your ninja warrior super fighter kungfu skills and save your freedom of the king. Prove yourself as a real superhero ninja by showing the tower ninja warrior and survival skills in this superhero ninja hero saga game 2021. You are the lord of fight war 3D, use your samurai sword fight like brave ninja archery soldier with enemies in this sword ninja fight game.Mortal warriors will try to crush you with their strong tiger armor and hammer.

Every enemy has different abilities. You will have to chop, kick, punch, slash through them like a hero or just climb away to disappear. Don't get hit if you know how to move in shadow battle. Be man and stand against traitor and his army who murdered your king. Use iron and gold swords, axes, hammers or bone bow to clear your way.

Archery Hero is a 3D simulation mobile clash game which has amazing shooting galleries, animations. And with first-person-shooter, it’s so realistic which makes you feel like you are actual in the archery clash game. Come and improve your skills to be the best archer in shooting world!

Find out what users think of Archery hero - Master of Arrows Archery 3D Game by reading the reviews and checking the rating.