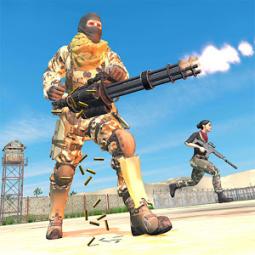 Non Stop Action is waiting for you!
You are going to love this breathtaking shooting counter Gun Strike which is the ultimate Gun shooting fun game.  The gameplay is very modest; you have to eliminate all the enemy force, officer’s use your Shooting skills to destroy the enemy bases on Ghost Island. Jump from the plane like Real commando; enter the battlefield kill the enemy in free action games. Armory like real gun shop recommended for you: Deadliest weapon pistol, Assault Rifles, shotgun, SMG, Sniper Gun. Sniper Offline games some deadliest Shooting stuff off course there in the offline games. Enjoy Details Graphics authentic Gun Firing positions, Counter Gun Strike credible Real Commando action in the heat of battle field offline Shooting Game. Modern Strike Elite Counter Attack Commando meets the every action you need. Just grab it now and ENJOY SECRET MISSION in Free GUN Games or shooting games. Use your stealth tactics like modern strike Elite Commando and finish your tasks in counter attack mission for new games 2020. Moreover upgrade weapons. Use long range weapons to shoot the watch tower enemy while playing shooting games. Real Commando-Secret TPS Shooting perfect is the defense to Counter Gun Strike in stealth. It’s FREE TO PLAY! 🔥

Browse the most popular games
Elite Counter Attack is completely free to play and download, while some in-game content can be purchased. One Option live or death! So, what are you waiting for new games? Download the ELITE COUNTER ATTACK-MODERN TPS SHOOTING for free to engage in offline shooting games and taste the ViCTORY 🔥 Call the Best Commander, the Gun is ready to Counter Gun Strike. Modern commando-Secret Mission GOOD LUCK, COMMANDER!

Note: We welcome any feedback or suggestions while playing to improve this Modern TPS Shooting game.

Find out what users think of Elite Counter Attack- Modern TPS Shooting by reading the reviews and checking the rating.