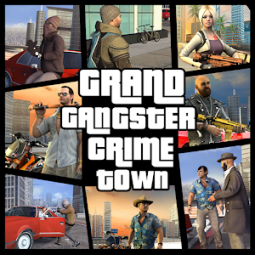 Begin your adventure as the real crime gangster hero and start missions of stopping street crimes and difficult grand wars in cool open world combat games. Show your survival skills as a fan of fps games who do not fear to fight against the crime lord to be godfather or real hero in the ultimate grand war gangster auto.

Accept your different roles in most thrilling challenges of the grand gang 3d character or real crime gangster grand war fighter now tackle different types of motor vehicle theft missions. Get into the car and show your driving skills and find most wanted real gangster mafia thugs hiding in the open world city of sin.

Move around freely around the city environment of thug and mafia while running or show your auto driving skills using smooth controls for easy navigation. You are put on multiple missions lately. Accept the challenge of rescuing the innocent citizens and complete them within time limit by eliminating every target with different modern guns.
This is the best grand city mafia game where you can get involve in different modes like shooting mode, grand battle mode where you answer to the call for most epic fps fight. You can also chose solo mission to do your duty to make some epic chaos like the grand big city crime robbery. Survival in the grand downtown gang crime city is almost an impossible mission. You have to fight for your underworld gangster life. There is no other chance to become the master and legend of the downtown mafia.
Gear up with some heavy artillery and add best weapons to arsenal. Stop most wanted criminals that spread some epic wild robbery escape plan. Police cannot chase them so help these cops to locate all the thugs hiding in town in the city of sin.

How to play:
Tap to load this awesome open world shooting game
Customize your criminal character according to your choice
Select a thrilling plan to make chaos or accomplish peace in city
Meet the secret agent to obtain your mission objective
Follow the map directions to reach to the target
Borrow or steal autos from citizens or your rivals

Find out what users think of Gangsters Crime Simulator 2020 - Auto Crime City by reading the reviews and checking the rating.