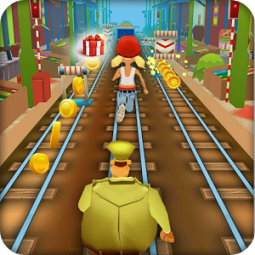 Subway Ride Surfs as fast as you can dodge the oncoming trains
The most excited city subway themed runner game, escape from the police officer, run as fast as you can.
Intuitive controls to run left or right, jump in the sky to obtain more coins, excited slide to safety.

Subway Ride also gives you the chance of getting amazing gifts. Collect your daily gift each day and open mystery boxes to get some special rewards.
Don't forget to dodge all obstacles in the way.
Run as fast as possible.

Drag up to jump.
Drag left, right to change the lane.
Drag down to slide.
Double taps to get boards.


Join the most subway running game, daring chase, enjoy the surfers.
Download, Play, Share and don't forget to give us a review of Train Run Surfing Game.

Find out what users think of Subway Run Surfers - Subway Train Surfers by reading the reviews and checking the rating.

Nice game I ever played but you have to improve the graphics,well done