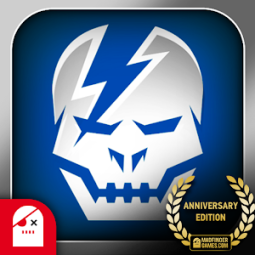 Check out the download rank history for SHADOWGUN in United States.

Rank History shows how popular SHADOWGUN is in the Google Play, and how that’s changed over time. You can track the performance of SHADOWGUN every hour of every day across different countries, categories and devices.

The year is 2350, and corrupt intergalactic corporations are the rule of law, hiring bounty hunters and mercs to do their bidding. The best of the best are known as SHADOWGUNS.

☣ CRUSH, KILL, DESTROY! ☣
- Featuring the most advanced combat A.I. to date—enemies flank, seek cover, and utilize teamwork to take you down! Battle automated sentries, aerial drones, and other lethal foes—tactical maneuvers are based upon actual military strategy!
- Solve hacking mini-games to whet your nerdly appetite, then get back to blasting!

☣ CONSOLE-QUALITY GRAPHICS! ☣
- It ain’t just pretty—it’s gorgeous! Advanced lighting effects, beautifully rendered environments, and pro voices make this one of the most advanced games for your smartphone!

☣ LIKE YOUR SCI-FI SOAKED IN BLOOD? ☣
- Immersive storyline with multiple outcomes! You decide how it ends!
- The first installment in a major franchise!
- Unlock the detailed “Shadowpedia”, and read more about the SHADOWGUN universe!

☣ FROM THE MIND OF A MADMAN! ☣
- Survive the onslaught of Dr. Simon’s deadly creations, including level bosses, mutated grunts, killer machines, and more!

Find out what users think of SHADOWGUN by reading the reviews and checking the rating.

I bought this game for Android in 2013, and now they have removed access to it because it's now "unavailable" in my country?? I own the license for it, I should be able to re-download it as I please!

Been looking for this game for a while. Glad I was able to find it. The original shadowgun game runs buttery smooth on my ROG phone 2. Even though it hasn't been remastered, the game feels like it has due to my phone. I'm all smiles on this side of the fence.

They don't let me refund