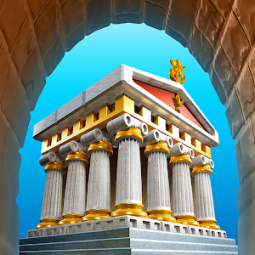 Rise of the Roman Empire: Grow, Build your Kingdom

Check out the download rank history for Rise of the Roman Empire: Grow, Build your Kingdom in United States.

And here is the new territory. Many did not believe, they did not want to believe that here the Empire could create an outpost and survive. The history of this region is too complex, and too few heroes would like to build a frontier here to protect the interests of the Empire.

Only one hero is ready to take a chance and responsibility - it's you!

Take control of the construction in the city, develop trade, welcome merchants from all over the world, create favorable conditions for settlers, protect the people who believe in you, explore the wild land, equip heroes for raids, control them, fight and conquer new territories. Take the fate of the whole city into your own hands. Act!

Become the governor of Caesar on the territory of the barbarians, prove your allegiance to the banners of the Emperor! Rome believes in you, do not let it down!

And if someone does not kneel before the Emperor and the Empire, they will get to know the wrath of the sword of the Roman Empire.

Find out what users think of Rise of the Roman Empire: Grow, Build your Kingdom by reading the reviews and checking the rating.

The game is too slow to get loots, too slow to see the progress of the game,, i give stars for good graphics

The game is great. good potential. also no need to grind when you can exploit making money and food. find and study the game and you shall find holes to earn fast and grow fast. one thing i dont like is when you go offline and harvest food and money the game freeze for maximum of 25 - 35 seconds. WH…

How can we win the raid. When the enemy has 2 team and we have 1 team.

Was happy with the game, but got tired with bugs and constantly loosing ships when chance of success is 100%. Sick of it! Bye!