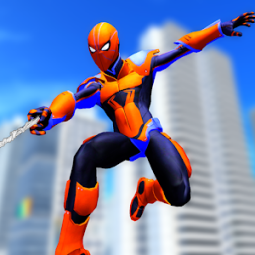 Be a real robot spider hero in the most amazing offline hero fighting games 2021. Yes! You need to fight and eradicate all crime spreaders.

Relish the biggest update of the free Robot super Hero game . This is the modern era where not only wrestlers, crime fighters and police compete the grand gangsters. Humans hope that futuristic Robot superheroes fight can get them rid of evil spirits. Come out of traditional ring fighting games, street fighting games or flying robot games and join the most realistic robot superhero fighting game 2021.

Break your traditional concept of robot transformation and cars flying games. Yes a robot superhero can have winning mortal 3d fighting combat with fast and fearless nerves. So do you want to become the part of spider superhero man games?

Accept this open challenge to be a real Robot spider to make the city free from criminals. Don't get wait. Either its Miami city, vice city or Las Vegas City. You need to reach the top of all heroes. Yes its the Robot spider games initiative. You need to use all your spider powers to unleash the street fighting criminals.

A real Robot hero will definitely win fam and popularity because he will rule the city. Fight with critical chase and various bosses along the criminal piles. Real robot spider superhero has super powers. Use unlimited superhero robot fighting actions, Run through buildings, make mega jumps and secure landing. Beware of what is happening around in the best spider hero games 2021.

Find out what users think of Robot Spider Superhero: 3D Hero Fighting games by reading the reviews and checking the rating.