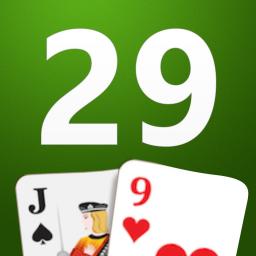 Check out the download rank history for 29 card game + in United States.

Rank History shows how popular 29 card game + is in the iOS, and how that’s changed over time. You can track the performance of 29 card game + every hour of every day across different countries, categories and devices.

Introduction:
Twenty Nine - 29 is a South Asian trick-taking card game in which the Jack and the Nine are the highest cards in every suit.

Players:
This game is usually played by four players in fixed partnerships, partners facing each other.

Deal and Bidding:
Deal and Calling are anti-clockwise. Cards are distributed in two steps by four cards in every step.
Based on the first four cards, players bid for the right to choose trumps. Normal bidding range is 16 to 28.
The bid winner chooses the trump.

Scoring:
After the end of a round, if bidding side meet their bid point, their game point will be increased otherwise decreased.

Double:
If play round is in Double mode, the game point will be increased or decreased by 2.
Non - bidder side can set double after bidder bid.

Find out what users think of 29 card game + by reading the reviews and checking the rating.

If it possible to change the player names, then it will create real environments.