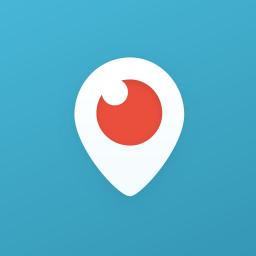 NEW: Start earning when you go LIVE! Super Hearts are virtual gifts you can give and receive during live broadcasts.

Use Periscope to:
• Broadcast live video and interact with people through hearts and comments.
• Discover popular live video streams from around the world or search for broadcasts by location or topic.
• Give and receive Super Hearts to show support.
• Missed out on a live video? Don't worry — watch the best parts with replay highlights.
• Instantly share your live videos to Twitter and other social networks.
• Broadcast privately to specific followers or friends.

Periscope Live Video Streaming was featured in iOS on 6 placements in United States on Aug 19, 2018.

Also featured in 153 other countries, and probably even more in the past.

Find out what users think of Periscope Live Video Streaming by reading the reviews and checking the rating.

Great way to watch ball games when you can’t be at the game.

I enjoyed this app while I was able to use it. Until I got banned for no apparent reason, and no reason was given when emailed. I never streamed, just enjoyed watching and chatting with people. I just think it’s a bit ridiculous to ban someone and not even give a reason when/if this occurs. If I had violated some rule I didn’t know about it. Best of luck to everyone else and enjoy.

Button isn’t selectable. Sure wish this app would connect to my TV or Roku. How about an app for my TV streaming.

There’s a huge group of child predators on this app, do not download unless you want to be having pedos stalking you.

Seems like its the biggest concentration of blm supporters. Open racism against non blacks.