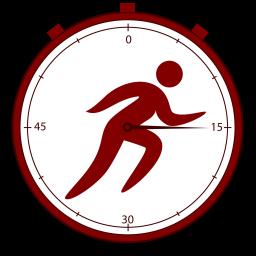 Check out the download rank history for AeroExaminer in United States.

Rank History shows how popular AeroExaminer is in the iOS, and how that’s changed over time. You can track the performance of AeroExaminer every hour of every day across different countries, categories and devices.

The AeroExaminer App includes three maximum VO2 tests in one App: Beep (or Bleep), Yo-Yo Intermittent and a Treadmill Tests. These tests are known as multi stage shuttle run tests (MST) and are used to estimate your maximal oxygen uptake (VO2), which gives an indication your aerobic fitness. They are commonly used to test athletes in sports such as soccer, most team sports, and others.

This app is available in a sale bundle with our FartlekDrill App, allowing you about 25% savings when compared to purchasing separately.

Advanced and experienced athletes can create their own versions of any of the tests by modifying shuttle distances, starting velocities, or other parameters. Also, the tests are suitable for training, which can be adjusted to the athletes needs by modifying the test parameters.

The App is designed to interact with our Fitness Apps, so the user can have an integral "trainer". Also, it includes our popular AeroRadar App.

The test, also known as the 20 meter shuttle run test, "Beep" or "Bleep" test, is typically used to determine maximal running aerobic capacity. It consists in running shuttles between two lines 20m apart, at a given speed. After a predetermined number of shuttle runs, the speed is incremented (for a new level) in accordance to an established schedule. Each level takes close to one minute of running time. Based on the final achieved speed, an estimate is made of the VO2 max.

The Yo-Yo Intermittent Fitness Test is a variation of the 20 meter beep test. It uses 40m shuttles and incorporates a recovery period after each 40m shuttle run. It consists in running at a given speed to a line (20m away), turn around and return. This is one shuttle. After each shuttle is completed, hold for a given recovery period. After a determined number of shuttle runs, the speed is incremented in accordance to an established schedule. Based on the final achieved speed, an estimate is made of the VO2 max.

The treadmill test is modified version of the 20 meter Beep test. It consists in running for 60 seconds at a given speed. Then, the speed is incremented (for a new level) in accordance to an established increment period. Based on the final achieved speed, an estimate is made of the VO2 max.

For more information about training concepts and other useful information, visit the pages in our "Support" section of our Website.

Find out what users think of AeroExaminer by reading the reviews and checking the rating.