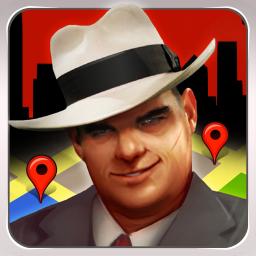 City Domination is a FREE geo-located strategy game that you play where you live. A multiplayer RISK in your city. Manage your mafia, form your gang and confront MILLIONS of players!

5/5 "This strategy game is great. Addictive and original concept. Free, social, with a great state of mind, just the way we like it. Crime pays !"

5/5 "If you are looking for a simple game, quick and strategic, look no more : It’s rapidly addictive, get ready for some sleepless nights."

City Domination is a well balanced mix of STRATEGIC planning and mafia BATTLES, at the scale of your CITY. The goal is to CONQUER and CONTROL the largest possible territory with the help of your GANG of mobsters, in order to create the most INFLUENTIAL CLAN. Play solo, or with other players: create or join a GUILD, use your cunning, between alliances and treasons, and be a strategist to impose your EMPIRE of CRIME!

FEATURES :
√ Play FOR FREE with the most innovative MMO strategy game of the moment
√ GEOLOCATE yourself to create your own MAFIA and CONQUER your city in an unforgiving urban WAR
√ ATTACK the areas around you to CONTROL them and to expand your EMPIRE of crime
√ PROTECT your territory by posting mobsters in defense
√ Increase your income, hire men, develop your army, FIGHT against the players of your neighborhood
√ JOIN other players to become the most influential GANG in the world
√ Use STRATEGY and DIPLOMACY to take over the areas close to you
√ Customize your guild insignia and impose your colors on the world

Pushing mobsters from other mafias back is only the first step: your fight in this MMORPG will end only when your gang dominates all of the other crime factions! Join the gang wars in City Domination and discover an explosive mix of Ingress, Risk, and Clash of Clans on Apple Plans !

Having problems? Suggestions? We would be happy to help you! Send us a message at citydomination@gmail.com

Find out what users think of City Domination – Mafia MMO by reading the reviews and checking the rating.