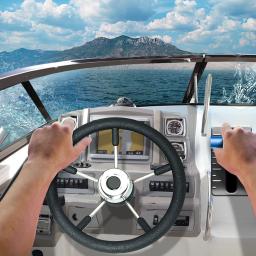 Drive Boat 3D Sea Crimea
Boat Driving Simulator Crimea - have always dreamed of driving and riding on a personal boat on the Black Sea? Would you like to visit in the Crimea?
Then you have the chance to manage a boat on the Black Sea coast of Crimea lengthwise!
Management and the interface is simple and clear!
Collect the most points!
Surprise your friends, own a boat! Splashes, sea, sand, palm trees and a boat, all that is necessary for a great holiday!
Discover all the boats collect the full collection!
Start playing for free now and play without the Internet anywhere in the world!
Leave us your ratings and comments, and we will consider them when upgrading!

Find out what users think of Drive Boat 3D Sea Crimea by reading the reviews and checking the rating.

This game is a copy of the real game. Shame on the people who made this game.

I thought, “Hey, the programmer made a better version!” I liked the first one, so figured I’d like this one even more...*BZZZZT!* WRONG!!!The boats are different, the graphics better. The interior animation slightly better, but... woe to you, if you play this game!The controls are identical. Tap the ignition. Tap the throttle. And steer the boat in three possible positions. Left, middle, or right. Simple. Exactly like the first game.But that’s where the fun ends. Everything is exactly the same, except, now... each boat is $15,000. And buying each one is determined by your score. You have to reach 15,000 points to buy your first boat. And that will take... a looong time! You pass a bazillion boats and islands. All identical. And it gets boring real fast.And you FINALLY reach 15,000 points! You crash your boat, just so you can upgrade to something faster! I figured the fourth boat would be the fastest. Why not get it?BECAUSE IT ISN’T!!!I selected it, and my top speed, if ANY faster (I couldn’t tell by how fast the score was ticking by), was only a smidge faster. YOU GOTTA BE KIDDING ME!!!I quit the game. I’m done. I liked the first game. I played and got all the boats. It was a nice distraction. But the “sequel” gives you NOTHING but better graphics and animation. That’s it. And playing the first boat til I could afford the second one was sheer, boring torture! And to have to endure that SAME speed AGAIN?!? No! Just... NOOOOO!I gave the first game 5 stars. It was worth it. This game gets 1 star, because it visually improves the game, but makes it so torturously slow and boring, I’m sure being water-boarded at Guantanamo Bay would be preferable to playing this game! >:-(