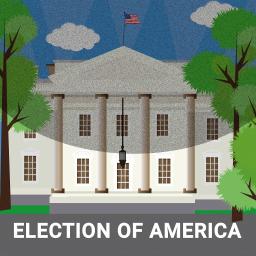 Check out the download rank history for Election of America in United States.

Vichitra Games launches Election of America a board and turn based strategy game. Presidential elections are at doorsteps in America. Who will get the majority and win the white house?

Election is held after every 4 years in America. We have created this game only for entertainment purpose and we are trying to increase awareness of elections across young people in America. We do not promote any party. We respect the Democracy.

Election of America allows user to play on two maps, small and large.

User can enjoy the game on map of America.

There are two main parties 'Republican party' and 'Democratic party' and we have added 'Other party' to make the game more interesting. The goal of user is to gain control over more than half constituencies. Any party who gains control over half constituencies first will win the election.
User need to throw dice then user gets as many actions as dice shows. User can use only these number of actions in that particular turn. Actions could be capture empty territory, Increase power of own territory, reduce power of enemy territory or Increase espionage meter.
Once espionage meter is full, then espionage power is executed and user can gain control over enemy territories based on some logic. Artificial intelligence also uses espionage power.
Three political parties are competing to gain more than half of constituencies makes it more challenging and fun to play. User need to maintain balance between all combination of actions to win the game.

So, What are you waiting for? Download Election of America now and make your political party win the white house!

Find out what users think of Election of America by reading the reviews and checking the rating.