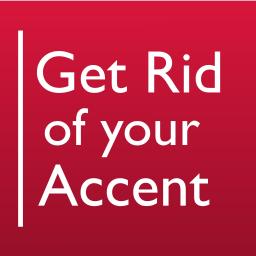 Get Rid of your Accent UK1

Check out the download rank history for Get Rid of your Accent UK1 in United States.

Get Rid of your Accent is a phenomenon. Seven years ago, we created an instant hit, the best-selling pronunciation book in the UK. Our second and third books make us the most popular books and CD package around. Actors, lawyers, brokers, businessmen, and diplomats have flourished with our help.

"As a diplomat I need effective communication skills, particularly to address public audiences through radio and TV. A clear, crisp accent is always more convincing than a thick, foreign one. I am reading this book and I think it is immensely useful for foreigners like myself." Samuel Moncada, Venezuelan Ambassador to the UK

"Clearly, the authors of the book have collected years of experience and expertise to create this practical and effective tool for speech study." Joe Windley, Head of Speech, Central School of Speech and Drama, London

Now with this toolkit you can get the best of our amazing lessons in one easy-to-use app that goes everywhere with you, it is the British English Pronunciation Course at your fingertips. Hear the sounds; see how to make them; practice; and watch your career, education, and social life blossom.
Visit www.batcsglobal.com

The lessons cover all English sounds needed to master Received Pronunciation, neutral accent of educated southern English and the chief accent taught to foreigners who wish to learn the British model. Students can play audio tracks, record themselves, and compare their pronunciation with the model.

This app will help you to:

Linda trained at the Royal Academy of Music and qualified as a teacher of Speech and Drama. She also holds an International Phonetics Diploma from London University.

Linda has had extensive experience as a dialect coach in TV, films and the theatre. For more than 20 years she has worked as a Speech Tutor at several London drama colleges and privately, specialising in the teaching of Received Pronunciation (RP) and the eradication of accents.

Olga holds a degree in Linguistics and an MBA from Nottingham University. She is also an advanced public speaker and a holder of the Toastmaster bronze reward.

Olga learned a unique drama school method for Accent Reduction from top British phonetician Linda James. They together co-authored the UK bestselling books, “Get Rid of your Accent”, Part One, Part Two and Part Three.

In the past, you could only get speech training in British drama schools or by taking speech lessons from a private speech tutor. Olga wanted to make this exclusive training accessible for a much wider audience. Linda and Olga took the method long used in London drama schools, adapted it for learners of English and collated it into a single training manual, with CDs, the first of its kind.

The success of the book led to another venture Olga undertook: she designed and launched Accent Reduction courses for diplomats, professionals, students, and many others who need to neutralize their accent in a short period of time. The courses became a huge success and have been featured in National newspapers and television in the UK. Visit www.batcs.co.uk and book an individual course to get the best results in a short period of time.

Find out what users think of Get Rid of your Accent UK1 by reading the reviews and checking the rating.