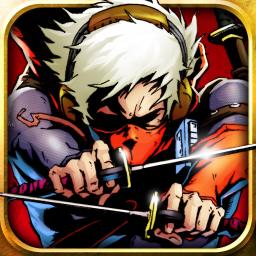 A MADE IN JAPAN Online RPG with never before seen full 3D high-definition graphics.
Experience real time communications such as cooperative play and chats
with exciting battles using various skills and jumps in this massive vast world!

Characters are designed by Takashi Okazaki best known for Afro Samurai.
Full scale role playing game with over 100 quests each with great volume can be enjoyed.
Pick your class from Assassin, Mage, Cleric or Warrior and enjoy the world of ninja action!

From the Civilization Charter, strict rules lay down in the Fifth Continent.

Due to the rapid increase of monsters,
people's life fields became overwhelmingly narrowed.

Ones that can use ninjutsu, known as ninjas that were working secretly in the underworld,
are now called on for the mainstream jobs such as carrying goods, securing VIPs, and defeating monsters.

With the top leaders of ninjas called the Great Four (G4),
the ninjas are now sent off to each land.

To prepare for the upcoming battles with monsters in the far away land not yet known,
the ninjas were focusing on with their training.

Find out what users think of IZANAGI Online +Samurai Ninja+ by reading the reviews and checking the rating.

Game mechanics are a problem

Cant change the camera functions,(to look up have to drag it down and vice versa) to get an advanced class it will take you a stupidly long time it is ridiculous how much they make you do for the advanced classes. The quest arrow is very inaccurate as well. Game doesn’t promote activity whatsoever so if you hope to have an engaged community don’t come here. This game is completely open world and can have you submerged in it for hours gameplay is fun if you can get around the small problems that pop up.