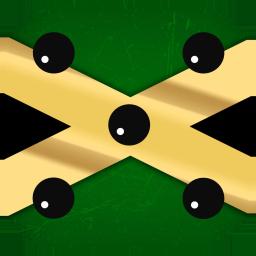 Check out the download rank history for Jamaican Style Dominoes in United States.

In Jamaica and the Caribbean, Dominoes is a game enjoyed by most. Dominoes is a game that 28 cards are shared between 4 players. Each domino has to be matched with the corresponding suite. Players will try to pass each other in an attempt to be the first player to empty their hand. When the game is just started, the first play is given to the player holding the double six tile. If the last two cards of a suite is on each end of the table, the game is said to be 'blocked' the player that has the lowest count will be the winner of that game. In a game of 'first to six' the player that reaches six first is the winner of the whole set.

Find out what users think of Jamaican Style Dominoes by reading the reviews and checking the rating.