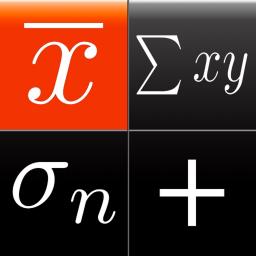 Check out the download rank history for Statistics Calculator++ in United States.

In designing the statistics functions of this app we had one thing in mind: The user should not need to read a single line of manual to perform the statistical analysis.

Simply use Add X, Add Y, and Add f buttons to enter the elements of the lists and frequencies, if any, and you are done. All the statistics and regression models are only a few taps and swipes away. Tap the List button to see the lists entered. The elements of the lists are interpreted independently (as two separate lists) and jointly for regression analysis (if the size of the lists are equal). You can also take advantage of a new import feature to bring in your data from Microsoft Excel or Apple Numbers by first converting them into .csv format.

You have the capability to save multiple lists of data and use any of them as list X, list Y, or list f. Access Lists Editor feature by tapping the icon on top right of the Statistics Lists view. Furthermore, all these lists persist in the memory. Therefore, if you close and the relaunch the app the lists are there for you.

Other major features of Statistics Calculator++ are:
- The left pane scrolls to reveal more functionality without a need to switch modes.
- You see the expression as you enter and it keeps a history of your calculations
- Capability of performing fraction manipulations and converting between different formats (proper, improper, and mixed fractions) and seamless integration of fraction, integer, and decimal manipulations.
- Capability of inputting degrees, minutes, and seconds for angles and converting between degrees-minutes-seconds format and decimal format.
- Capability of calculating permutation, combination, Least Common Multiple (LCM), Greatest Common Divisor (GCD), and prime factorization.
- Quadratic and system of two linear equations solver
- Rectangular to polar and polar to rectangular coordinate conversion (extremely useful for phasor calculations for electrical engineers)
- Throws a set of dice (choice of 1 die to 4 dice)
- Backspace to delete last digit entered.

This is an ongoing project and we are working on more features and functions to be added to every update of the app.

You are going to love the simplicity of the user interface and yet have the powerful functionality with which Statistics Calculator++ is loaded.

Find out what users think of Statistics Calculator++ by reading the reviews and checking the rating.

I wish you could input Z-scores into normal distribution

There is a few improvements but big one would be for you to swap input scores.