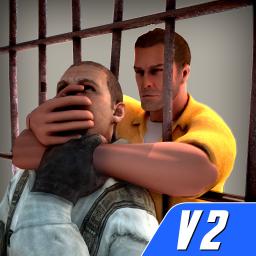 Plan your escape & break out of jail in this action survival stealth jail break game. Escape from a 3D immersive prison in this free jail escape game. With plenty of levels & missions with different tasks & objective to complete in a vast 3D prison environment this game will make you fall in love with stealth action survival genre. This game is a true prison jail escape simulation. Escape from prison to get your freedom again & to be with your family & daughter.

In this game you get to play the role of a special agent who on a mission was captured by the enemy forces. As a secret agent you were on a special secret mission, serving your country like a true hero but unfortunately the enemy forces somehow managed to capture & put you in jail. A maximum security prison just like Alcatraz. But simply putting you in a jail & making you a prisoner is no good. You are a special agent trained in stealth, hand to hand combat fighting, spying, melee weapons & gun shooting. You have all the skills required to break out of a prison like this. This jail can’t keep you away from your freedom, your family, your daughter, from serving your country like a true hero & enemy forces can’t keep you as a prisoner for long.

Use all the resources you find & keep your stealth mode on to successfully breakout of this prison. It is a high security prison just like Alcatraz so expect a lot of security guards equipped with modern weapons & guns, cctv security cameras, police search dogs & patrol cars. Move in your stealth mode & take down the security guards & police silently. Use their weapons to make your escape from the prison easy. Use all possible stealth moves like diverting or gaining enemy’s attention by throwing rocks or making a sound. Hack prison computers to turn off security lasers & cctv cameras. Pick locks of the locked door. Do what you’ve got to do because your survival & your freedom depends on your prison break out. You are great at planning which is a plus point so plan, strategize & execute your escape super plan carefully. Your boss is taking care of your family & daughter while you are away so you do not need to worry about your family & daughter. Just focus on your prison escape because your boss is waiting for you with another mission. A mission you will be given as soon as your break out of the jail.

This game is the ultimate survival escape mission so plan your jail breakout & escape the prison to be with your family & daughter again & to serve your country again like a true hero. Enemy is afraid of your wrath hence the prison has very tight security like Alcatraz. You are your country’s hero & your country needs you so plan your escape & regain your freedom!

Survival Prison Escape v2 was not featured in iOS in United States on Jun 01, 2017.

What words do people use when trying to find an app?
The right keywords can help an app to get discovered more often, and increase downloads and revenue. App Annie tracks millions of keywords so you can get more downloads for your app, and understand what keywords your competitors are using.
No ratings for this app...
upmobi.xyz！！raise downloads by 10 times
This is one of the best apps i have found till now. Appreciated your hard work.Btw, here wa can provide rating, review, so as to the keyword searching install.Want to get more organic users, then find us in upmobi.xyz