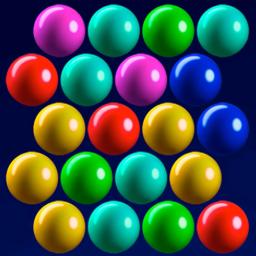 Check out the download rank history for Sky Bubble Shooter in United States.

Gameplay:
The game screen consists of a grid of cells filled with rows of pre-proposed colored bubbles. The color scheme of the bubbles varies depending on the difficulty of the game (2-6 colors). Also in the settings you can choose the level of difficulty of aiming: Easy, Normal, Hard. The player sees the current and next bubbles to be shot. When the number of misses exceeds the limit, an additional row of bubbles is added. The trajectory of the shot with the bubble changes by moving the cursor. The bubble can bounce off the wall, which is convenient for aiming at difficult places.

Game Strategy:
The main task is to destroy all the balls. Various strategies can be used to achieve the goal:
- remove bubbles of the same color. After that, this color will no longer appear in this level. And in this way you can set each color in turn. You have the option to undo up to five shots in a row. An advertisement will be triggered after every fourth cancellation
- shoot at groups of bubbles of the same color - all elements are under these chains and are not attached to other bubbles will fall off
- find already the original chains of match three or more bubbles

Game history:
Classic bubble shooter with a choice of game difficulty and background. Pop bubbles with six colors. This is a casual match 3 game with puzzle and shooter elements.
"Thomas Bubble Space" is a clone of the game Bust-A-Move developed by the Japanese company Taito Corporation for the Super Nintendo in 1995. The unique mechanics of the casual puzzle game allowed the game to develop into an independent arcade game genre of the same name. For a long time it was thought that the game was created and aimed for children, but the mechanics of the game have won a wider audience among teenagers and adults. Due to its simplicity, the game quickly spread to portable devices. The popularity and short gaming sessions have made the game in demand on many sites to generate traffic and audience for advertising. This game is played by both children 4-5-6..9 years old, and adults up to 99 years old and more. The main audience of course is teenagers, housewives and just people looking for simple entertainment.

About US:
This match 3 game was created on the basis of knowledge about many similar top games like Pop Bubbles Shooter, Zuma (Luxor), Solitaire, Dragon Ball etc. "Thomas Bubble Space" was made by two friends from Ukraine - Sergii (usability, UI/UX, design, marketing) and Thomas ( programming, layout, testing). We love to play different arcade and puzzle games, so we decided to create this bobble shooter. We tried to take the best moments from the classic bubble games and combine them in this game.

Soon we plan to improve the functionality, make it possible to remove ads. Add a choice of the number of colors as well as many interesting features.

We hope you enjoy it!

Find out what users think of Sky Bubble Shooter by reading the reviews and checking the rating.

I love this app, but I recently downloaded it on my iPad Pro 12.9 and I can only see half of the bubbles on the screen I can’t play the full game without only saying half of the screen and bubbles I love this game so much will you please fix it where I can see the whole screen of bubbles I would rea…