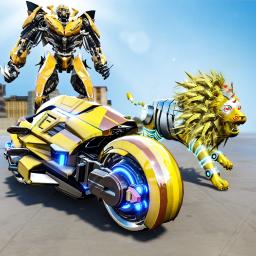 Welcome to the world of robot war games where evil robots are attacking the city and creating problems for civilians. now the futuristic robot battle war is going to start. Play wild lion robot bike transformation game that has been made to demolish the evil robots wave coming to ruin the country peace. Enemy robot warriors are against the humans that are in robot battle city to rescue innocent peoples. In real tiger robot transforming: lion robot games become a real robot superhero to fight against robot mafia with animal robot simulator & mech robots in animal robot games

Download lion robot game.
Pick the best lion robot player
Check the robot power
Transform into robot or lion
Shoot the enemies in the city
save yourself from attack