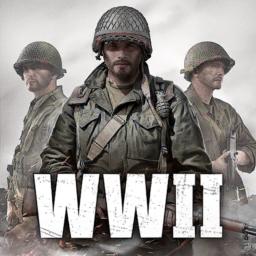 Fight soldiers from all over the world in the best World War II online shooter for iOS!
This game will take you to World War II battlefields, where you’ll able to use military vehicles to conduct battles.

There are several modes in the game, here are the few:
- Deathmatch – intense battle where everyone fights for themselves;
- Team deathmatch – Two teams fight for domination until the timer ends;
- Capture the flag – you should capture the enemies' flag and bring it to your base. But be careful, don't let the enemy capture your flag;
- Custom games – Create your own game modes and invite your friends to play;
Battle with military vehicles and numerous weapons, from pistols to machine guns and shotguns.

Features:
- 7 legendary World War II battlefields!
- 4 types of vehicles from different countries: the USA, Russia, Japan, and Germany!
- 5 game modes and a custom mode with your own rules!
- 57 unique weapon types: pistols, assault rifles, machine guns, shotguns and many more!
========================
Follow us on VKontakte: https://vk.com/worldwarheroes
Follow us on Facebook: https://www.facebook.com/WorldWarHeroesOnline/
Subscribe to our YouTube channel:
https://www.youtube.com/channel/UChMfgo6g8ri0FaAR-SpYpXw

Find out what users think of World War Heroes: WW2 FPS PVP by reading the reviews and checking the rating.

Isn’t fun at all.

This game isn’t fun because it’s overwhelming and frustrating the fact that you can’t get a single kill is game breaking it results in a unbalanced scale like their leveling up okay they have better weapons we don’t if the developer as I see saying in other reviews says that in game purchases is for quick progression then there wrong because it messes up the pace of the game. For example in battlefield you don’t see a gun added with attributions because during battles it’s alters with the scale of firepower and how much damage your doing resulting in a dominant game by the person with the better power. This game takes that and absolutely cramps it so hard that you just quit this isn’t a review for people but for the developer that can’t seem to make a good fps take these tips and shove them up your hole you need them badly.

No acknowledgement from devs on serious matter

I won’t be returning to this game, it’s been well over a week but it feels as if the devs have no clue as to the problem the latest update caused. People are unable to open the app after update 1.26.1 please fix or at least acknowledge the issue, don’t tell people to just reinstall, our devices are not the problem.

This is a very cool game with lots of different weapons, avatars, and game modes!!

Unplayable on my iPad. It keeps crashing. I am lucky every time I finish a game.

When are you adding the m2 carbine and add this