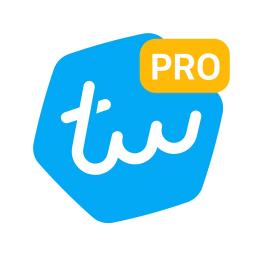 80% less typos with the first keyboard made for your iPhone.

80% LESS TYPOS
A recent study with 37,000 participants showed that on current keyboards 1 out of 5 words contains typos. With Typewise you finally get rid of these ARRGGHH-moments. Thanks to the hexagon layout, keys are 70% larger and much easier to hit. This reduces typos by 80%.

100% PRIVACY
What you write is personal. That's why Typewise runs locally on your device and none of your data is transmitted to the cloud.

NO PERMISSIONS
Other keyboards require dozens of permissions to access your calendar, contacts, files, GPS location and much more. Typewise does NOT require “full access”.

Typewise Keyboard PRO Lifetime was not featured in iOS in United States on Jan 04, 2017.

Find out what users think of Typewise Keyboard PRO Lifetime by reading the reviews and checking the rating.
3.0
65 ratings
Interesting Concept, Lacking In Certain Areas
I like the basic concept. The drastic change in the keyboard layout is refreshing. It does, however, have some flaws that bug me. The top row doesn&#39;t seem sensitive enough. I&#39;ll occasionally go to type a t or an i and it won&#39;t register. Text substitution not allowing for special characters is a huge letdown. I use Apple&#39;s built in text substitution both to type the interrobang (‽) and to type various ascii emoji. The lack of versatility in the text substitution feature on this keyboard heavily stymies that. On top of lack of versatility in text substitution, the absence of a shift key of some kind and forced reliance on the swipe up to capitalize gesture makes typing in ALL CAPS really annoying.Finally, the autocorrect seems way off. It misses obvious mistakes like woth (should be with), it won&#39;t autocorrect contractions like don&#39;t or shouldn&#39;t at all, and it wrongly corrects words like app to alp!
Only keyboard I use!
Keyboard &#34;keys&#34; on a smartphone are too small for how my fingers are shaped. Typewise has the largest area for each key, so it just works better for me. But other intelligent design choices are much more than icing on the cake: · the erase-restore swipe control; · the cursor positioning tool; · swipe up from a letter to capitalize; · easy-to-manage autocorrect; · and *no* uploading of data to network servers!! All of these features are what I want from a keyboard anyway, so this keyboard is my choice even if I didn&#39;t need the larger keys. Bravo to the typewise team!!
Updated review
Edited review, have been using the beta version for the next release and this keyboard is about to get a lot better. After awhile it gets to feel amlot morelnatural and comfortable than the stock keyboard. I wouldn't necessarily say it is faster than the standard keyboard, but it definitely feels better to type on even if you are really probably typing the same speed. Also the gestures really help with only having to type tings once. Really shares a lot of similarities with Fleksy another great keyboard.
Updated review
I keep coming back to this keyboard for some reason. The layout is strange asjwell as the learning curve takes awhile. Once you are there though this keyboard is great, lightweight application, themes look really nice and the auto correction a lot of the time is not even needed because the layout is bigger than the normal keyboard. Waiting for the final build to come out with predictions and it will be really great. Not for the casual user though as the layout does take a long time to get used to.
Good first version....
UPDATE 3:What! All these years and still no Korean!? Would have been great to see on Wrio, especially since I’m learning the language. Here’s hoping. UPDATE 2:Still no autocorrection, at all. UPDATE:Ummmmm.... There is NO autocorrection in this latest update. 😐--------------- 🤔Autocorrect is essential, but even more is allowing this keyboard access to iOS text shortcuts, at least. But Wrio is true to its word in that I was typing more accurately the more I used it. The layout did take some getting used to, but it does work. One thing I do love a lot is the very quick character deletion with the backspace. But until full iOS access and autocorrect is integrated into Wrio, I have to go back to SwiftKey.

icoaching
Do you want to learn more about icoaching?
Sign Up for Free