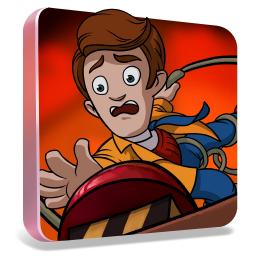 Check out the download rank history for Irony Curtain in United States.

Rank History shows how popular Irony Curtain is in the Mac, and how that’s changed over time. You can track the performance of Irony Curtain every hour of every day across different countries, categories and devices.

Take a look behind Irony Curtain in this satirical point-and-click inspired by the best works of LucasArts and Daedalic Entertainment! Experience the totalitarian Matryoshka through the eyes of Evan – a low-ranking, goofy journalist involuntarily pulled right into the middle of an espionage stand-off between two powers. Jump into the wacky spy adventure, uncover secrets of the bizarre communist country (and the powerful capitalist empire!), witness a story full of unpredictable twists and turns, and discover the true agenda of the mysterious Supreme Leader!

What business might the loving father of the Matryoshkan nation have with a lowly, capitalistic pen-pusher?
Why suddenly lift the Irony Curtain and welcome a stranger into Matryoshka?
And why is there an alligator in the middle of the bathroom?!

• An original setting: fictional Cold War era – alternate reality unbound by historical accuracy, and the communistic Matryoshka full of people who work all the possible angles to navigate this illogical, odd country.
• Inspired by classic adventure games – but better. No dream-logic, no pixel hunting. No-nonsense. Pure point and click fun.
•The Spy Intrigue – sleeper spies, stolen secrets and world-domination plots wrapped up in layers of humor.
• Quirky characters – Meet the mysterious Leader ruling Matryoshka with an irony fist, the clueless and guilible Evan, the brave and witty Agent Anna and the notorious Minister of Propaganda...
• Do it your way – some of the puzzles are non-linear and can be solved in two or more different ways.
• 21 hand-painted locations – that look surprisingly better than their original inspirations.
• 1,951 cleverly sneaked-in easter eggs – some of them punishable by political imprisonment.
• Music score as grand as Matryoshka itself - music by the state composer Arkadiusz Reikowski (Layers of Fear, My Brother Rabbit) with Main Theme by Peter McConnell (Monkey Island, Grim Fandango etc.)
• Full voice-over – 5534 lines of text in English, and subtitles in Polish and German.
• A 5-year plan – that no one ever hoped to achieve, and neither should you.

Find out what users think of Irony Curtain by reading the reviews and checking the rating.