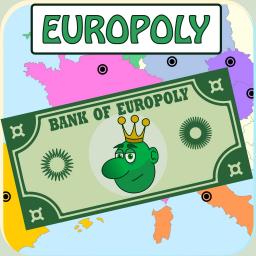 Check out the download rank history for Europoly in United States.

Rank History shows how popular Europoly is in the Mac, and how that’s changed over time. You can track the performance of Europoly every hour of every day across different countries, categories and devices.

Roll the dice, move your pawn, buy properties, make deals, acquire monopolies, build houses and force your opponents to bankruptcy. All this and much more is enabled in Europoly, the real-state board game that you will love.

A Europoly game can be played by 2, 3 or 4 players. Each one has a pawn for traversing Europe. If a pawn lands on an unowned property, she can buy it or auction it. But if that property is already owned by another player, she has to pay the rent. The overall goal of the game is to remain financially solvent while forcing opponents into bankruptcy.

The board is designed to perfectly fit your iPhone or your iPad. The squares include European cities and airports, motorway, ferry, casino cards, lottery cards and a jail. The player with the floor throws two dice and moves clockwise around the board. A player who lands or passes the Start square collects 5,000¤. If a player rolls doubles, she can roll in her turn. After three consecutive sets of doubles, she has to go to jail.

Cities are arranged in groups with the same color. The player who owns all the cities of a group has a monopoly and will be allowed to build houses, increasing the rent that is received. Transport squares cannot be developed, but the given rent increases if a player owns more than one of either type.

If a player needs money, she can trade with other players, sell her houses or mortgage her properties. Players cannot collect rent on mortgaged properties, but they can be unmortgaged by paying the stipulated amount to the bank. If a player cannot pay her debts (even selling her houses and mortgaging her properties), she must declare bankruptcy. The winner of the game is the remaining player left after all the others have gone bankrupt.

You can play Europoly with other bots or with humans in the same device. We have carefully crafted the Artificial Intelligence of the bots, offering 3 different and engaging levels. In the highest level, they play aggressively and are tough traders. In the intermediate level they are more relaxed and will offer better deals. In the basic level, the bots are soft and you can trick them to get good deals for your interests.

Contact us at producciones.don.naipe@gmail.com and give as your feedback and request help in case of problems.

Many thanks for your support!

Do you like card games? Don Naipe is specialized in traditional Spanish card games. We also do a good job with board games such as dominoes and parchís. You can find more information at our website:
http://donnaipe.com

Find out what users think of Europoly by reading the reviews and checking the rating.

Just downloaded today and have been playing for the last three hours...or longer I’ve lost track of time! Super fun. Like monopoly but free! There are some ads but, hey, what do you expect from a free game? I’ve won twice now after losing 3 times. I like that you can adjust how many players and the difficulty. The more I play the better I get. Super fun game to pass the time. I didn’t have any problems with playing. Everything ran super smoothly and I really enjoyed it. Enjoyed it so much I’m writing a review which I rarely do. You might get addicted though!

I’ve played this game at least 50 times and I have not won 1 time. I came close once but the good ole rigged dice caught it’s second wind and they stopped landing on my monopolies. This is the only decent monopoly clone and it’s rigged. Just gonna cave and buy the real monopoly.

I have played over 10 games and still haven’t won. It clearly causes you to lose money every chance you get, and the bots to always gain money. I got put in jail 7 time in one game, which isn’t likely. It’s nearly impossible to win.

Fun for a few games

Buying the cheapest city of every color is possible even with low starting cash - in fact it can be done every game even against max level bots that sell properties with markup which means they cant ever build houses because i dont sell. Then just mortgage most of them buy all the airports ferry and motorway and finally start building houses on cities with high returns and buy all the cities from the bots to finish the game by force.