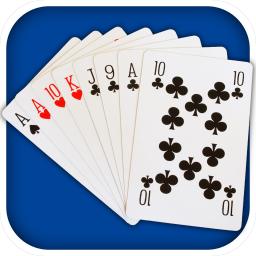 All official rules are handled :
- Play with or without declarations.
- Play with No Trumps and All Trumps.
- Coinche at any time
- Surcoinche.
- Several scoring options.

Your opponents and teamates are simulated by an high-level artificial intelligence, that knows the common strategies used in french coinche card game. Therefore the game is very realistic, close to game with real players, and the challenge is high.

For beginners, rules of French Coinche are also included into the application.

For any question regarding the application : support.coinche@eryodsoft.com

Find out what users think of French Coinche / Belote Contree by reading the reviews and checking the rating.