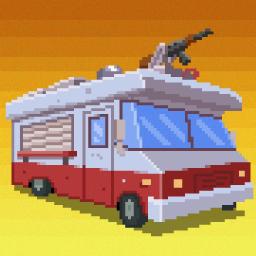 Check out the download rank history for Gunman Taco Truck in United States.

Rank History shows how popular Gunman Taco Truck is in the Mac, and how that’s changed over time. You can track the performance of Gunman Taco Truck every hour of every day across different countries, categories and devices.

Gunman Taco Truck is an action-packed drive across the post-apocalypse United States to reach the safe haven of Winnipeg, Canada, where there are no taco trucks and your family’s taco business can thrive. Getting to the safe towns is hectic but your truck is armed with weapons that blast mutants into taco fillings. In the towns you serve up the mutant scraps to struggling survivors who are more picky than they should be. Use money earned and scrap metal found to upgrade your truck and buy gas and supplies for the trip to the next town. You simply MUST see this game to believe it. Download now!

"Without question one of, if not the best, roguelike game I've ever played." ... "Crazy-good roguelike, very challenging and extremely fun. Cannot recommend more highly!" – Steam review

"...a game that's quite fun & enjoyable & original & interesting. We don't get that often." – Jim Sterling @jimsterling

"Rather than a silly kids’ game, Gunman Taco Truck is a competent action roguelike with some strategy and planning elements thrown in for good measure. Instead of a simple distraction, there is a robust game here that is going to provide quite a challenge, and you’ll see a significant amount of gameplay before you reach the end. There are also decals to collect along the way, and there are various routes that you can take across the country, so expect to spend quite a bit of time with the game if you want to see everything. It can be a bit tedious to have to replay the early parts of the game over and over as you start from scratch each time, but as you progress it feels good to get a bit further. All in all, Gunman Taco Truck is quite fun, and it surprised me with just how much game hides just behind the vibrant, silly surface." – TechRaptor

James Batchelor did an interview with Donovan about GMTT
http://www.gamesindustry.biz/articles/2017-02-08-romero-3-0-donovans-development-debut

Gunman Taco Truck was designed by Donovan Brathwaite-Romero when he was 9 years old. The game idea was so good that his parents, John and Brenda Romero, decided to make its development a family project. Over 2 years and lots of fun have gone into making Gunman Taco Truck an unforgettable experience, and the realization of Donovan's dream of making a video game. Donovan has been learning how to code for the past 3 years.

Find out what users think of Gunman Taco Truck by reading the reviews and checking the rating.