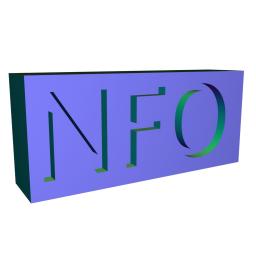 Check out the download rank history for NFOView in United States.

Rank History shows how popular NFOView is in the Mac, and how that’s changed over time. You can track the performance of NFOView every hour of every day across different countries, categories and devices.

This is a file_id.diz and anything.nfo file viewer for windows based computers. View all nfo/diz/txt/1st/me.

A Plain text file that includes information about a software program; contains release notes and commonly includes information about the group responsible for distributing; generally included as part of the program and related files.
NFO files often contain ASCII art. NFOView can render the text characters as the intended graphic. Standard text viewers, are not able to display required characters correctly. Because the once-ubiquitous ASCII code page 437 was never common on the World Wide Web and is poorly supported by most (as of 2007) modern computers, older NFO files are frequently rendered incorrectly in modern web browsers and on modern operating systems (which mostly no longer use code page 437). To display old NFO files as intended, a dedicated CP437-capable viewing software or conversion is required.
Since Microsoft Windows' System Information tool also uses the ".nfo" file extension, Windows users through VMWare or Parallels may unsuccessfully try to open NFO files in the System Information viewer.

.nfo (also written .NFO or NFO, a contraction of "info", or "information") is a commonly used three-letter filename extension of ASCII or extended ASCII text files that accompany other files and contain information about them.

Find out what users think of NFOView by reading the reviews and checking the rating.