When App Annie was founded four years ago, we set out to measure the app economy with new technology and metrics that did not exist before, providing an invaluable resource to app industry professionals. As part of that journey, we launched the App Annie Index to define commercial success on the app stores. We did it with the express desire that App Annie Indexes would become the industry standard, filling a void of data left open by the rapid advances in how content is distributed and consumed.

You might remember Apple CFO Luca Maestri mentioning App Annie in an earnings call earlier this year. Since then, the demand for App Annie data for use in earnings releases and corporate announcements has grown exponentially with fifteen companies referencing App Annie data in their earnings release the past quarter. We think it’s a sign of the times - as apps eat the world, an increasing proportion of the revenues and strategic future of publicly-traded companies is coming from the app economy. And we’re happy that we can be that independent, third-party source of truth. Bertrand Schmitt, our CEO, recently likened us to “Switzerland” and we’re glad to provide that reference point for investor relations teams and financial analysts alike.

Click a company name below to see the App Annie insights they cited:

“According to App Annie, the App Store generated 85% more global revenue than Google Play in the March quarter despite the differences in unit market share between iOS and Android devices.”

“According to App Annie, Cheetah Mobile was once again the No. 1 publisher for mobile apps in the Tools category on Google Play by worldwide monthly downloads in September 2014.”

“According to a recent App Annie report, the number of apps in the Google Play store grew by around 60% between July 2013 and June 2014, basically, the last year, which in turn, more than doubled Google's app revenue for the first quarter of 2014.”

“Gameloft was the second-ranked game publisher in the world in terms of game downloads on smartphones and tablets in 2013 according to the App Annie Index.” 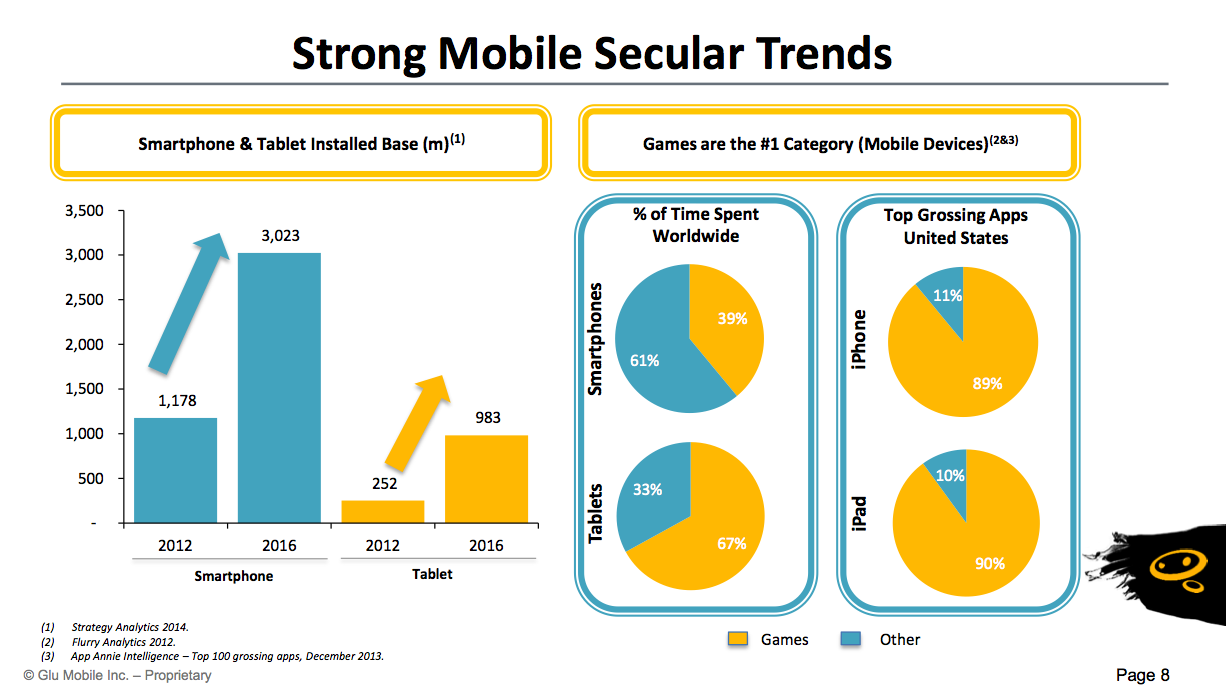 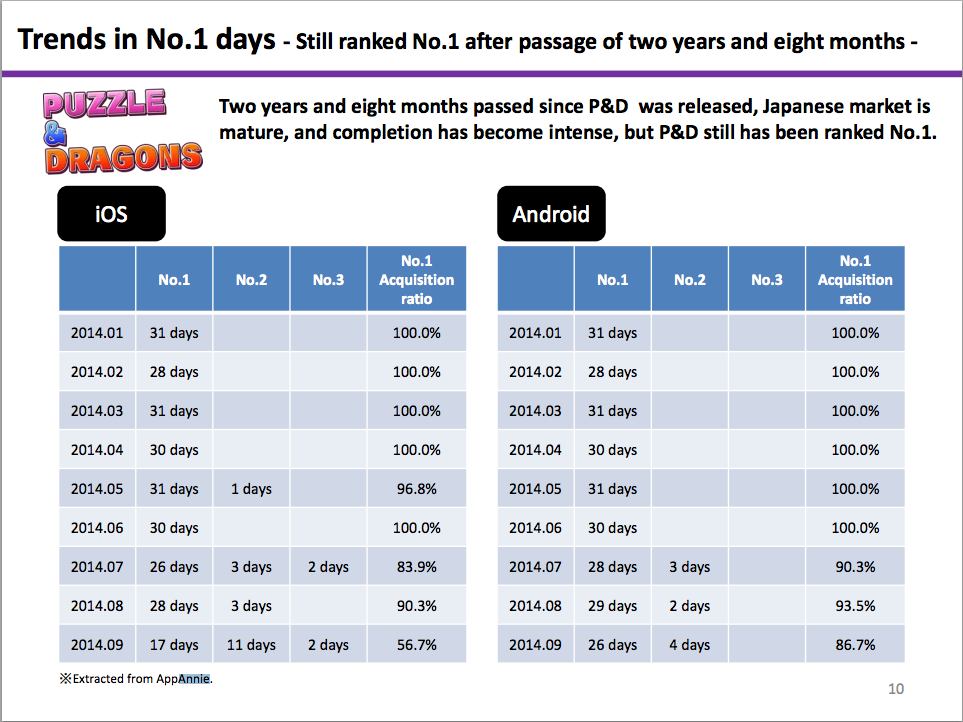 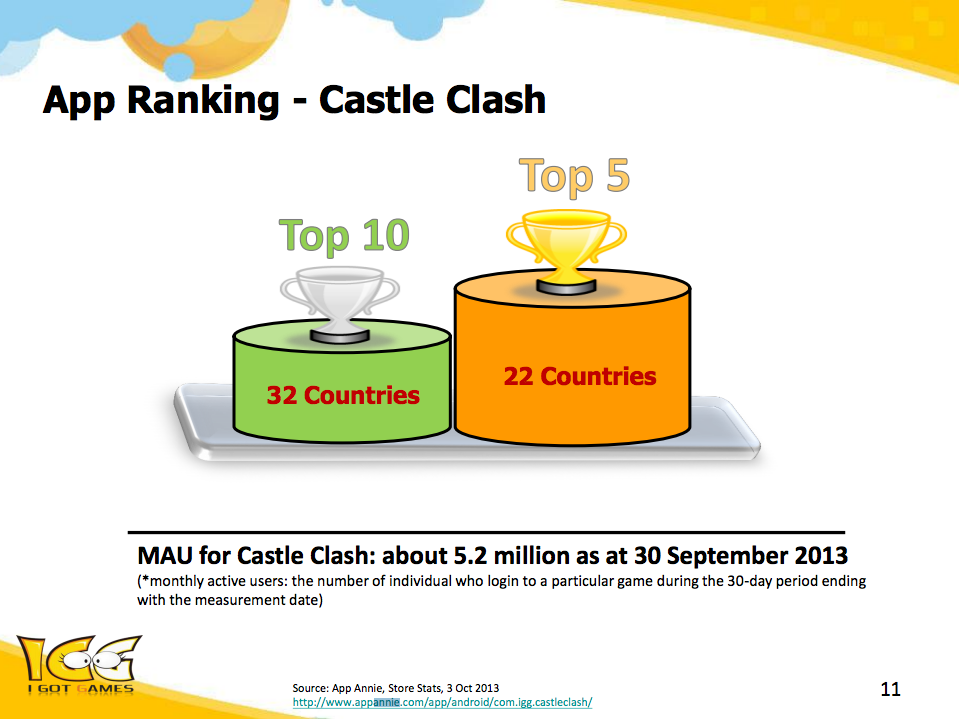 “According to App Annie in September 2014, our market share of worldwide revenues generated from casual games in the top 100 grossing games is 49% on iOS and 44% on Google Play and is larger than any other casual game developer. Moreover our portfolio of games is expanding as planned and as a result of our efforts to diversify our business in 2014, almost half of King’s gross bookings today come from games other than Candy Crush Saga.” 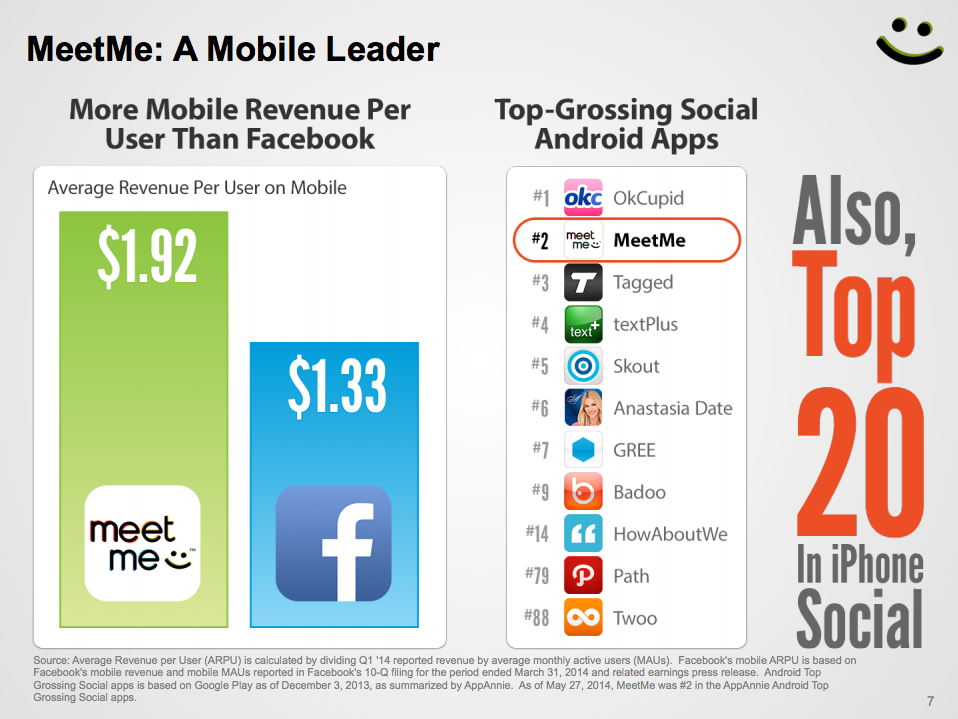 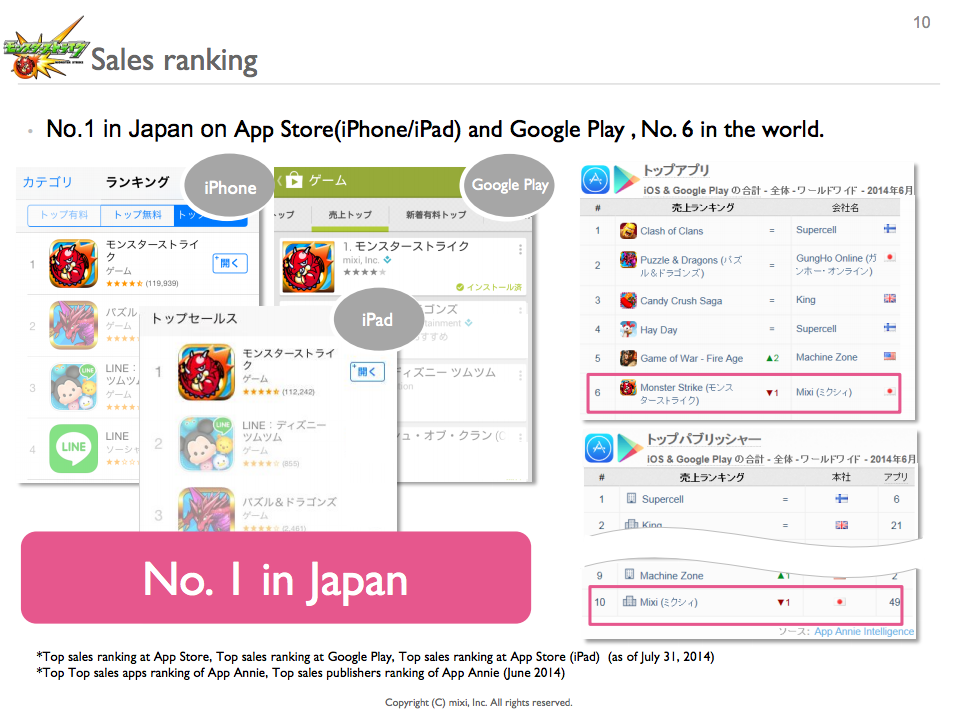 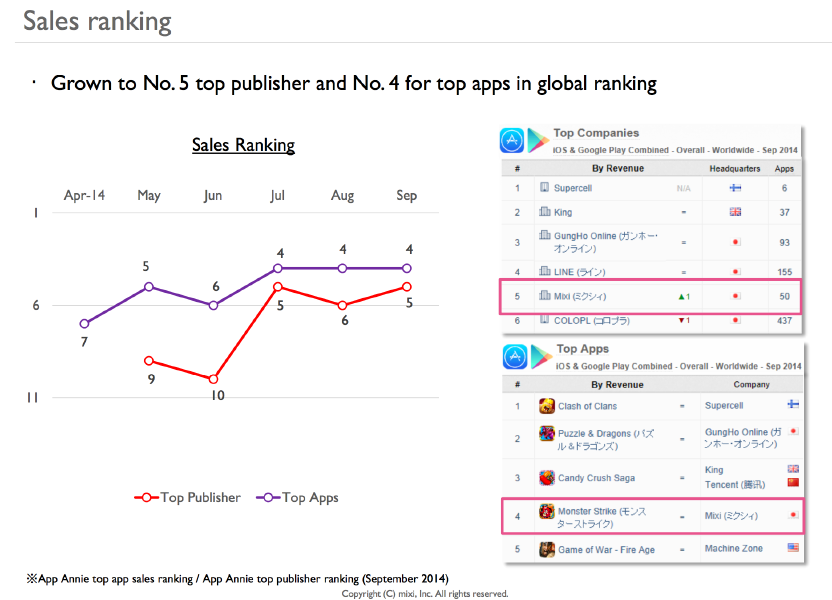 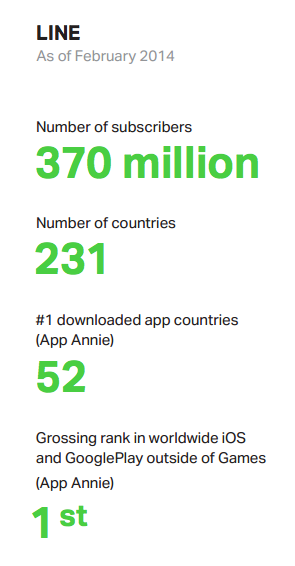 “In addition to FIFA Online 3 for PC, FIFA Online 3M for mobile, launched very successfully, contributing to our strong performance in Korea during the quarter. Because this is through a partnership, we can't disclose all of its KPIs, but the publicly available Google Play Top Grossing ranking in South Korea from AppAnnie for FIFA Online 3M, speaks to the incredibly consistent and strong revenue generation from this title.” 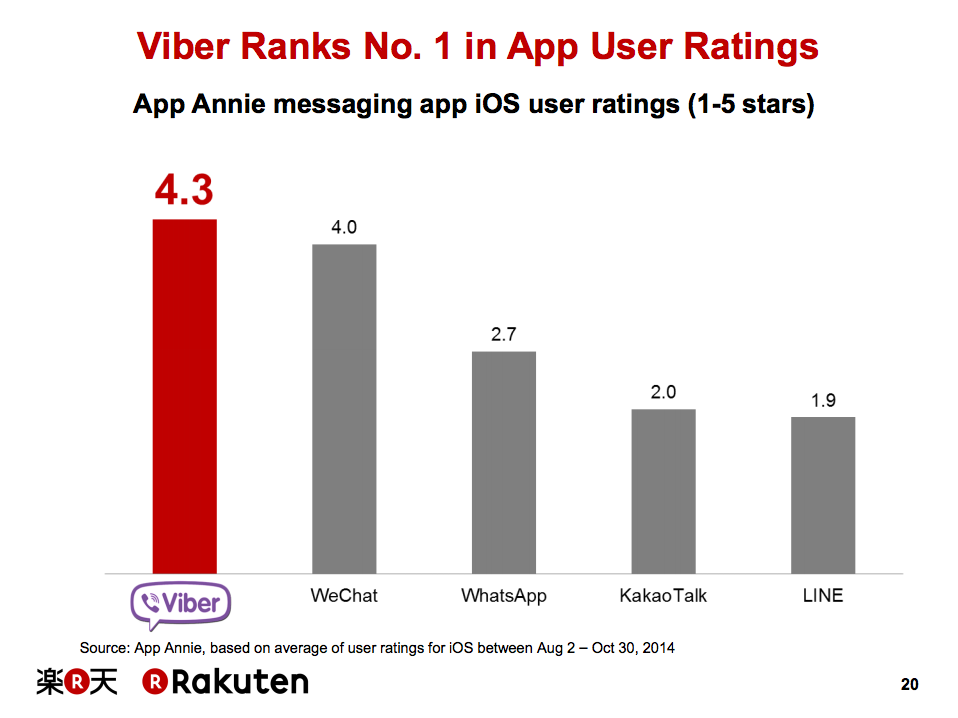 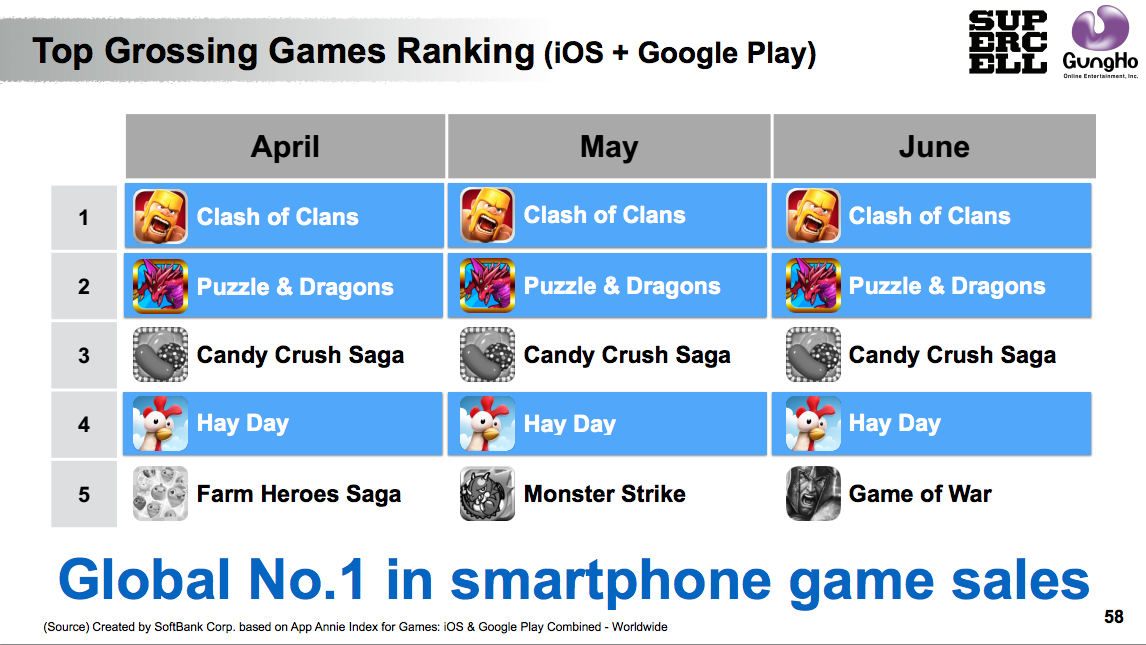 Get Your Guide to the App Stores

We have over 320,000 Store Stats users and 60,000 app publishers hooked into Analytics to track their apps. Add to that the fact 9 of the top 10 app store publishers subscribe to Intelligence, and you can see why we’re quickly becoming the app industry standard when it comes to making business -- and financial -- decisions. Read some of our free reports and get a peek at the full app landscape with Intelligence.

Succeeding in this industry hinges on making smart, data-driven decisions, and we want to put the tools in your hands to launch you to the top of the charts.