Autumn and winter holidays are a prime time for people to let their diets slip and potentially pack on some extra padding. In the United States, the calories from Halloween candy, Thanksgiving dinners and Christmas goodies add up as the year finishes up, with the average American gaining one pound during this period. Year after year, many people resolve to lose that extra weight after the holidays and into the new year. Want proof? Look no further than download and revenue trends in the Health and Fitness categories on iOS and Google Play.

Which is exactly what we did. Read on to see how Health and Fitness apps saw a boost this holiday season.

The Health and Fitness Apps That Sprinted to the Top

We used Store Intelligence to examine the worldwide Health and Fitness category on iOS and Google Play during the period October 4, 2015 to January 9, 2016. These rankings are limited to apps related to exercising, losing weight or keeping track of calories. We looked at the top five apps in downloads and revenue to see how they improved both in their app store categories and in the app stores overall.

* Asterisked apps ranked in the top 5 on both iOS App Store and Google Play Store.

Common patterns emerge from these lists: Fitbit topped the the download rankings on both iOS and Google Play. While it long held dominance in the Health and Fitness category on iOS, it was the top-downloaded app in the United States, Australia and Canada on Christmas Day (and the day after). 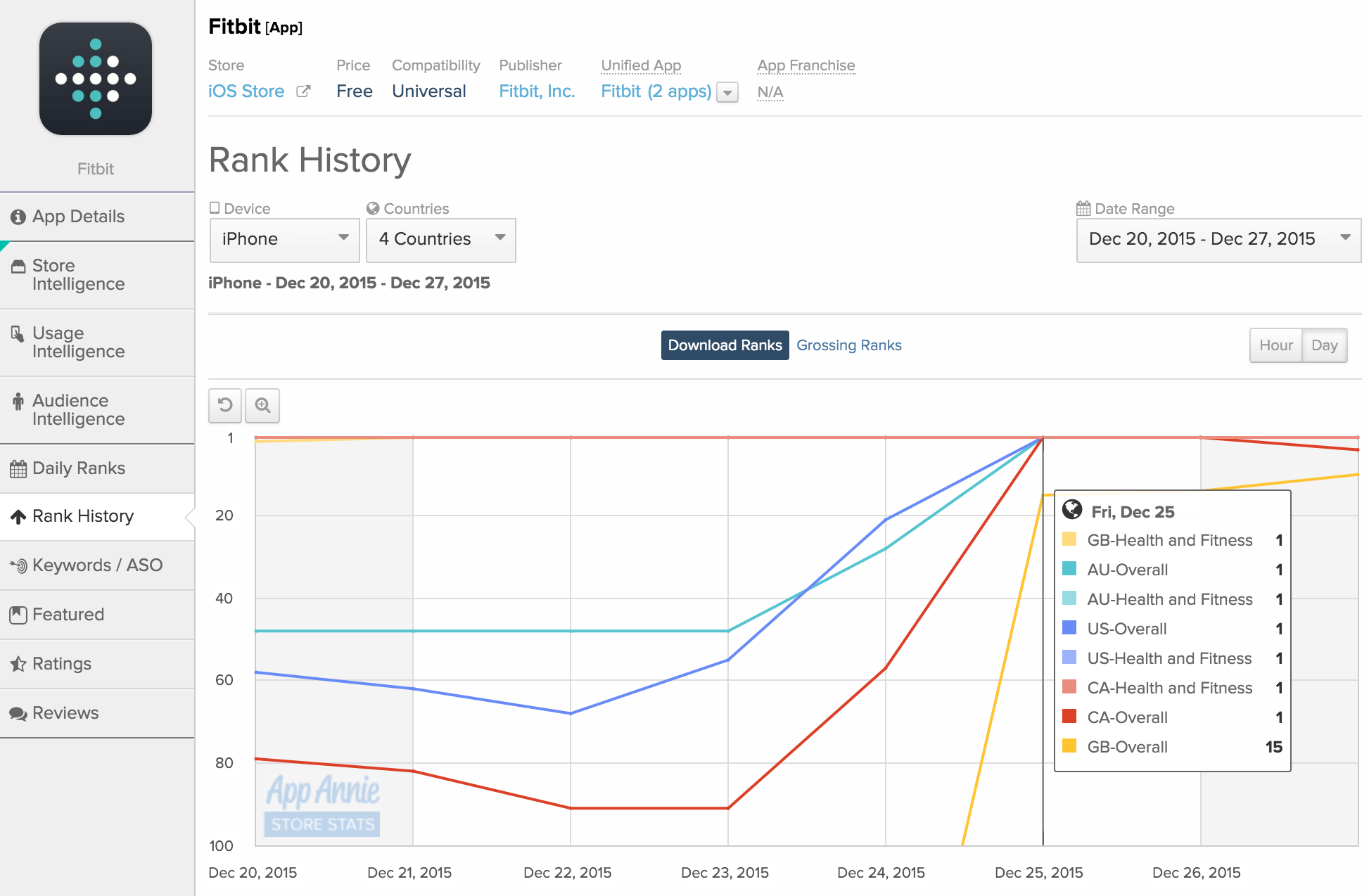 Fitbit’s huge success from purchases of its wearables during the holidays (which were very likely utilized for weight loss). It’s not just Fitbit that’s pushing wearables for health as Apple Watch continues to sell. In fact, we have seen Health and Fitness become one of the leading categories on watchOS.

MyFitnessPal was the only app to appear in all four rankings. After becoming part of the Under Armour sports brand in early 2015, MyFitnessPal has continued to grow its presence on iOS and Google Play. 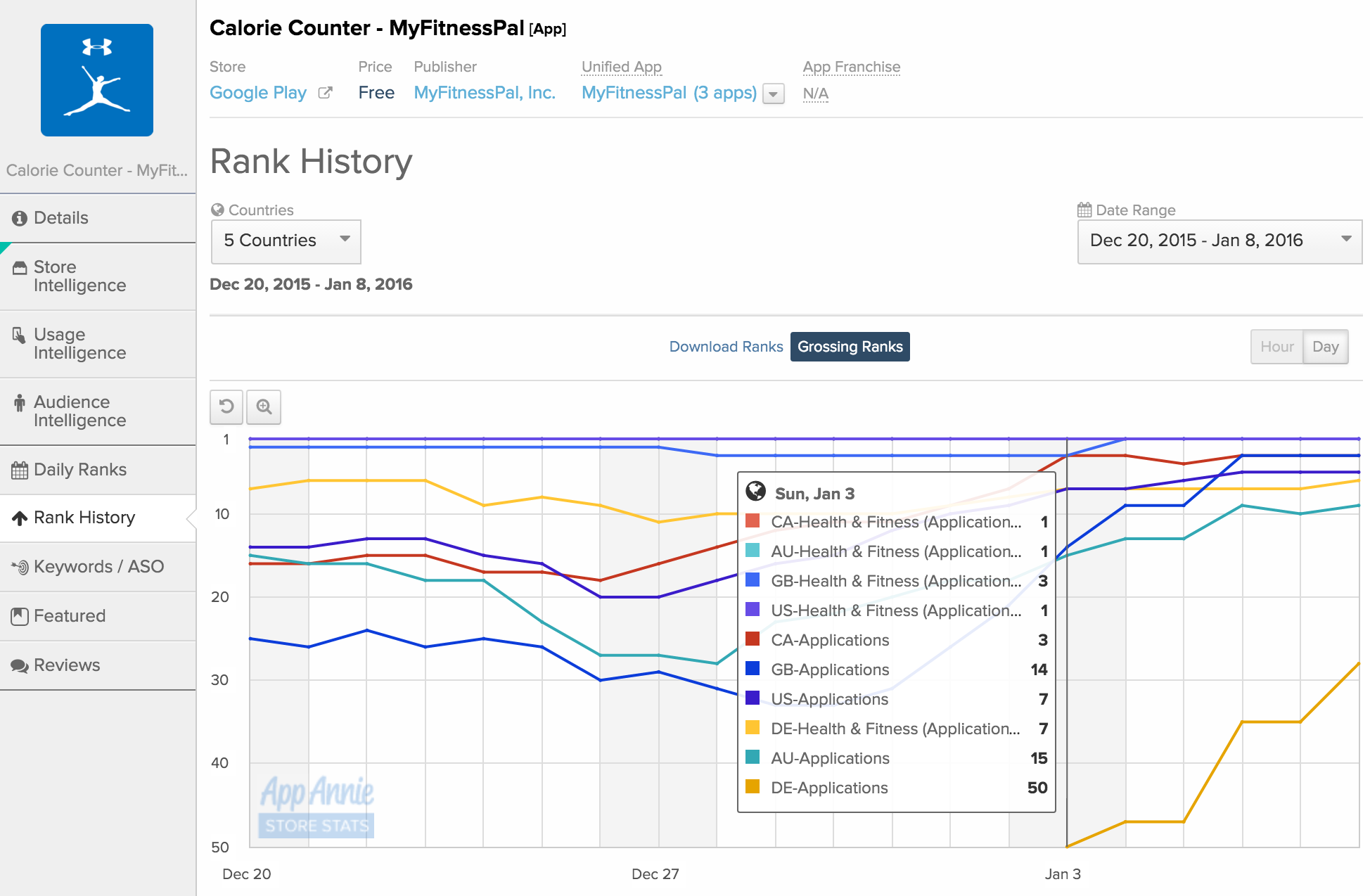 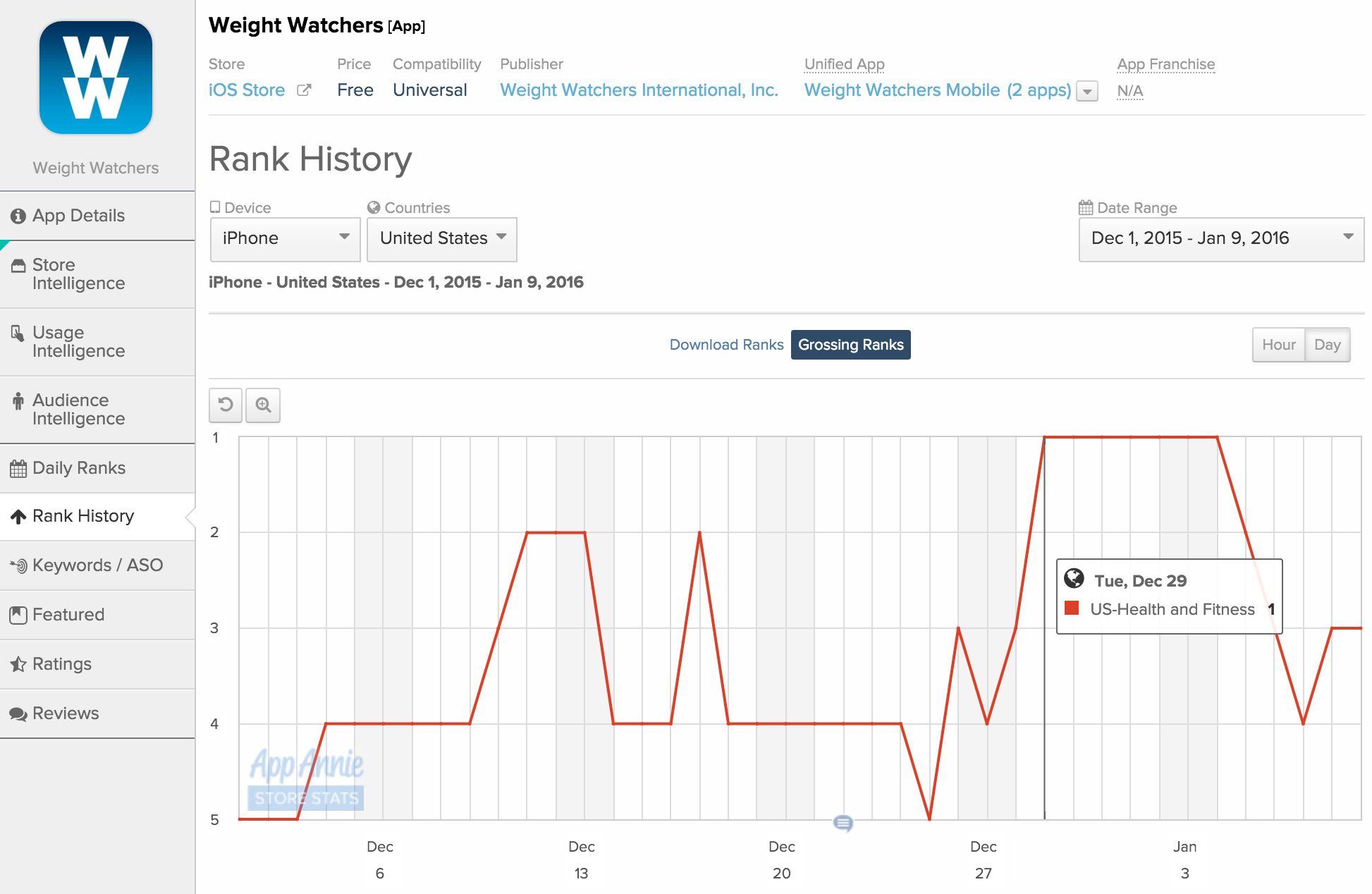 Weight Watcher’s Health and Fitness rank remained in the top 5 in the United States from December 1, 2015 to January 9, 2016.

The Leaderboards: How Health and Fitness Fared Overall

It’s important to know which apps are doing well within the Health and Fitness category, but how are these apps performing overall? We looked at which apps broke into the global top 50 (outside of games) from October 4, 2015 to January 9, 2016.

Calorie Counter — MyFitnessPal was the first to make the Google Play revenue rankings at #27 during the week of October 11, 2015, then rose to #23 the week after. The app continued to stay within the top 50 by overall revenue for the rest of the period.

Sweat with Kayla jumped from #79 to #40 in iOS revenue during the week of November 29, 2015, making it one of the first iOS Health and Fitness apps to drastically rise during this period.

Freeletics — Bodyweight also entered the overall Google Play revenue rankings at #25 during the week of November 22, 2015 and stayed within the top 50 throughout the new year. The app proved extremely popular in European countries, namely France and Germany.

Something to keep in mind — as either an app publisher or investor — is regional trends and preferences. Digging into successful apps’ features, marketing strategies and user interface can unearth insights that can help your own apps. Start by looking at which apps are topping the category or rising the fastest. There is also opportunity where top apps haven’t penetrated a region. You can utilize events (like the holidays) to pick up traction as people search for apps to meet their goals. 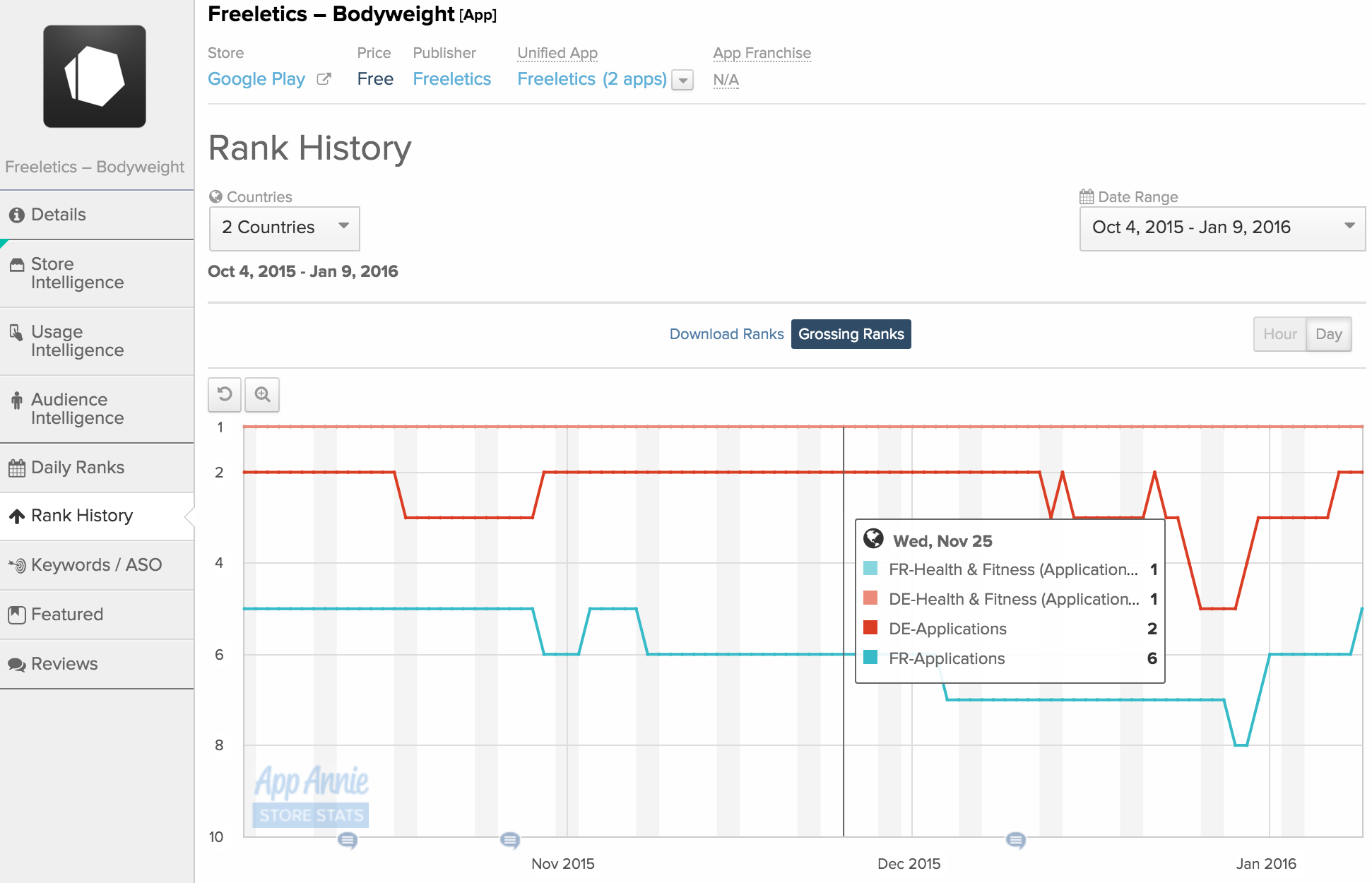 Freeletics — Bodyweight had strong performance on Google Play, staying within the top 10 for both Applications and the Health and Fitness category in Germany and France for the entire October 4, 2015–January 9, 2016 period.

The week of December 27, 2015 was a great time for iOS Health and Fitness apps as Sweat with Kayla returned to the revenue charts at #33, along with newcomers Weight Watchers at #42 and Calorie Counter & Diet Tracker — MyFitnessPal at #44.

Into the new year, Health and Fitness continued to gain traction. The week of January 3, 2016 included 5 iOS revenue spots with Lifesum at #24, Sweat with Kayla right behind at #25, MyFitnessPal at #28, Weight Watchers at #31 and 7 Minute Workout Challenge arriving at #49. 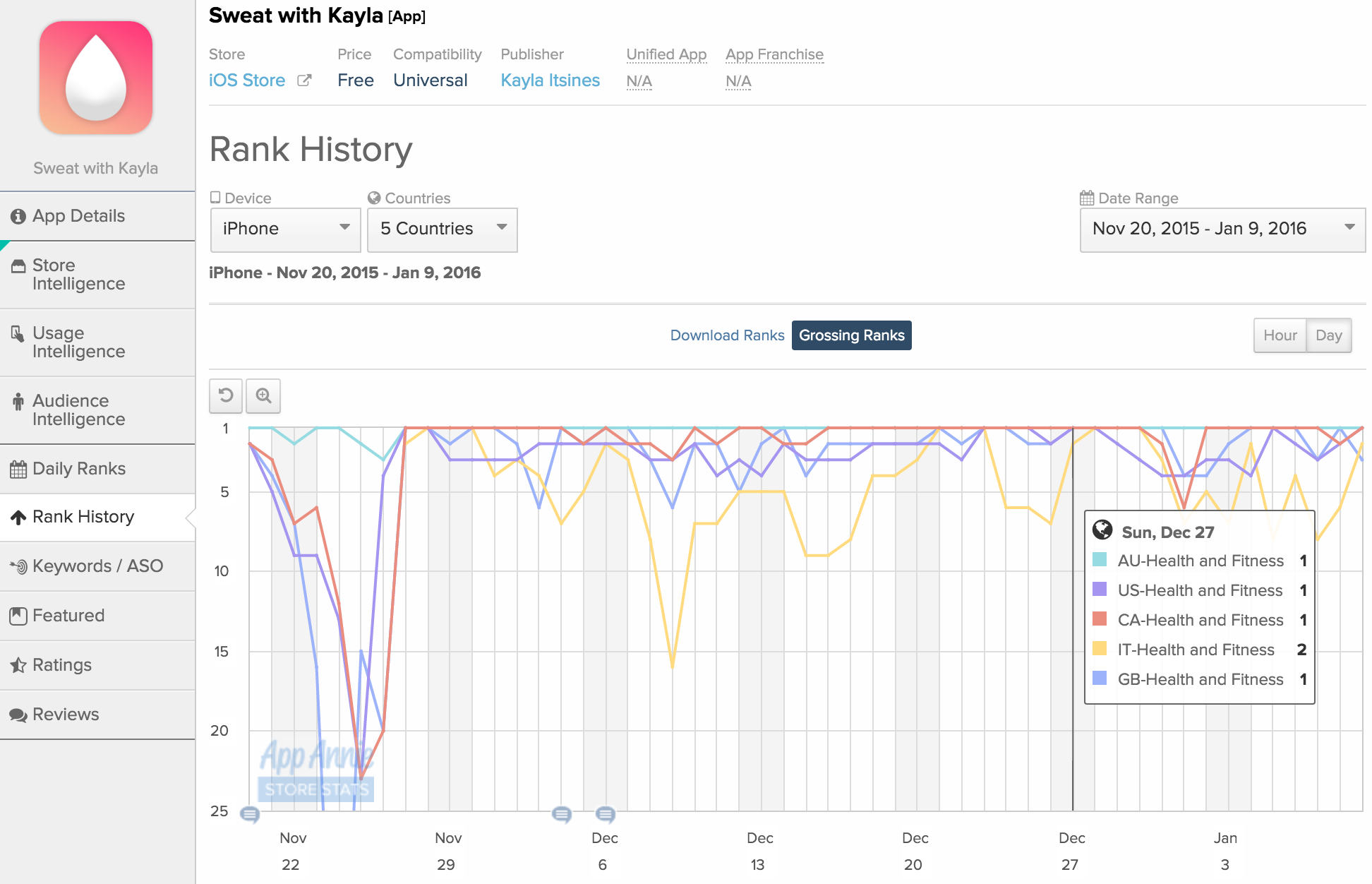 Released at the end of November 2015, Sweat with Kayla quickly contributed to Health and Fitness revenue within the United States, Canada, the United Kingdom, Australia and Italy.

While Health and Fitness apps saw healthy downloads, they also monetized well during the post-winter holiday season through in-app purchases and subscriptions. Freeletics — Bodyweight and MyFitnessPal were key examples as they maintained high Google Play revenue ranks during October 2015 and November 2015, respectively.

In the upcoming year, app publishers should be mindful of how wearables like Fitbit and Apple Watch will influence the app ecosystem. Other categories are learning how to utilize this new form factor, but fitness publishers have had considerable lead time to think beyond smartphones. As time goes on, this will be an important category to watch to see which companies are innovating in features and user acquisition techniques.