On January 12 we released our 2016 Retrospective Report, which covers key trends and insights from the previous year. We’ve since added in an additional 60 pages featuring charts that cover monthly active users (MAU), revenue and downloads at the country level for 20 leading mobile markets. Top charts at the worldwide and country level typically don’t see much change — however there were a few movers and shakers to take note of from 2016.

At the worldwide scope, we saw three new entrants to the top 10 apps for combined revenue for iOS and Google Play: iQIYI from publisher Baidu, Sing! Karaoke from Smule and Hulu all joining top ranks. WeChat publisher Tencent saw growth in the company revenue category, climbing from the #5 spot in 2015 to #1 in 2016. Netflix saw a big jump in the United Kingdom, entering the top revenue chart in 2016 for combined iOS and Google Play as #3. Music and video streaming apps are dominating, claiming five of the 10 spots for top app revenue. 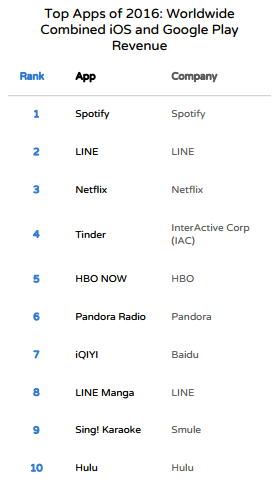 Of course, the stand-out app for gaming was Pokémon GO, which earned the #1 slot for top gaming apps for iOS and Google Play for MAU and downloads and the #3 spot for revenue — which is unprecedented considering the app launched halfway through 2016.

Diving into specific country levels, we can see a few apps and companies that made a splash. In the United States, Bitmoji was a new entrant to the top combined iOS and Google Play downloads at #7. A likely driver of the app’s success was its acquisition by Snap in March of last year, with Bitmoji’s Bitstrips incorporated into the app a few months later.

Download the full report, App Annie 2016 Retrospective, to uncover all of the insights from the past year and shape your 2017 strategies: