The Future of the Mobile App Economy

What does the future hold for the app economy? Read our top 10 predictions on the tech and trends to watch.

We have taken a close look at mobile app growth statistics and forecast all around growth throughout the app economy. Gross mobile spend, including app store spend and advertising spend, will hit $166 billion in 2017. But that’s not all our research team forecasts — by taking a closer look at insightful mobile app industry statistics, we anticipate a few noteworthy trends:

In 2017, we expect a wave of consolidation among commerce apps in the West along the lines of what we saw in Asia this year. During the innovation and discovery phase, ridesharing and delivery startups raised significant venture capital investment to fund growth and user acquisition. Discounted pricing was among the primary ways to draw in new users, but this also led to unsustainable unit economics. As the market matures in 2017, we expect consolidation to normalize competitive dynamics and put a few dominant players on the path to an eventual IPO.

For the last few years, Netflix and premium video streaming services were viewed as potential disruptors to traditional pay-TV. However Netflix views itself as a single network; i.e., it competes with individual TV networks rather than a bundle of networks. This characterization is a better fit with Netflix’s investments in original content. This strategy should still lead to subscriber and engagement growth as primary consumption channels shift. However, with limited libraries, premium subscription services will find it difficult to replace the existing TV paradigm by themselves.

We believe this balance of power will shift in the coming years thanks to the growth of short-form and live video on platforms like YouTube, Facebook and, soon, Snapchat. In October 2016, time spent by Android users in the United States grew by nearly 45% on YouTube alone. It’s poised to grow even further in 2017 as media companies increase their investments in dedicated content, making the case that time spent in apps is a vital mobile app industry statistic to pay attention to throughout the near future of the mobile app economy. Over time, this will evolve into a true disruption as it will leave less time available for terrestrial TV, particularly among younger age groups, leading to an increase in cord cutting and the number of “cord nevers.” 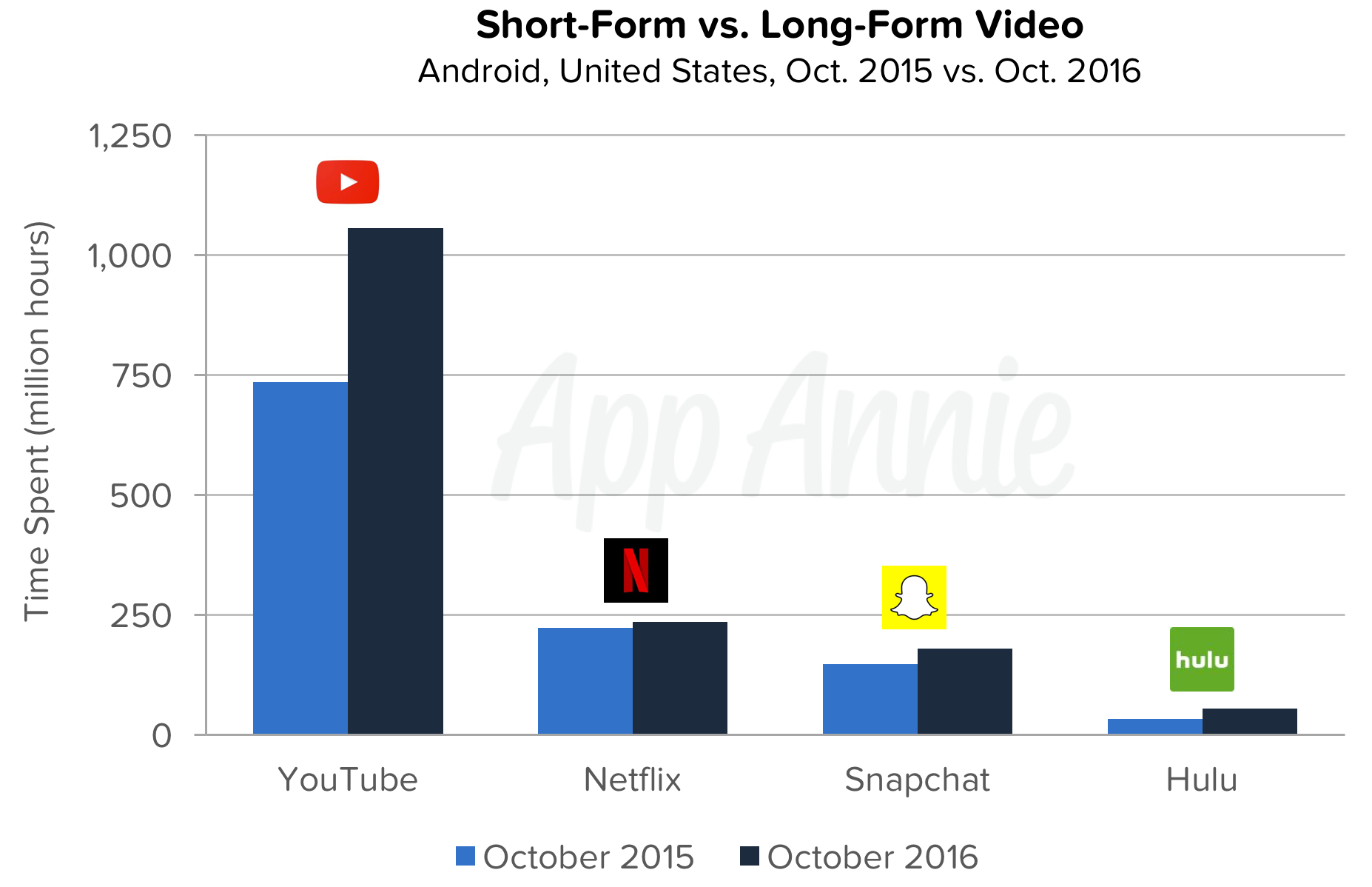 Time spent in YouTube is skyrocketing and is an order of magnitude higher than leading premium video apps. We expect time spent in Snapchat to overtake Netflix’s mobile app next year as it increases focus on short-form video.

The Impact of Chatbots Remains Limited, but B2C Messaging Grows

In 2016, much of the discussion around chatbots centered around the concept of “conversational commerce.” The counter-argument to this is the very existence of the on-demand economy. Food delivery and ridesharing apps exist because they remove friction — they replace conversation with a graphical user interface (GUI). On the contrary, the power of messaging lies in making existing conversation more efficient; for example, customer and after-sales service. Facebook is likely to lead the charge here through increasing integration of Facebook Pages with messaging apps like Facebook Messenger and WhatsApp. Chatbots will still play a role, but artificial intelligence capabilities will not be sophisticated enough to carry on complete customer service conversations in 2017. Instead, chatbot use cases will remain limited to notifications and routing users to the right human touch points.

Voice Search Is on the Rise — but Nowhere Near Mainstream

Google presented a bold vision for a voice-assisted future when it unveiled the Google Assistant. While we believe this will help increase the number of voice search queries on mobile, it will fall short of a large-scale shift in app interaction patterns. We estimated that voice interactions accounted for approximately 1.2% of total smartphone sessions on Android phones in August 2016. Even with meaningful growth in voice search, we expect voice interactions to remain well under 2% of overall smartphone sessions. This is because existing touch-based interactions are already deeply ingrained and unlikely to shift at this point in the maturity cycle. That said, on-screen suggestions based on the same underlying AI will gain traction.

Instant Apps, a way to allow access to Android apps without requiring a download, was among the most important announcements at this year’s Google I/O. Developer adoption in 2017 will be gradual, and will be led by apps that are used less frequently, particularly those from the travel, food delivery and retail verticals. This will be followed by apps that don’t require a high share of user time, like ridesharing apps. This becomes even more powerful thanks to a trend we call “distributed discovery.” Rather than relying on app stores as a single point of discovery, Google has been enabling discovery across its properties. Google Maps is increasingly becoming a source for app discovery with deep links to ridesharing, hotel booking and food delivery services. In addition to this, Google Nearby sends app prompts when users are in the vicinity of a local business or retail store. And finally, Google search, Google Now and Google Assistant recommendations all target app discovery in different contexts. A similar trend will play out in China with WeChat’s “small programs.”

Over the last few years, every successful mobile game publisher has had to contend with clones of their games. Niantic’s games — particularly Pokémon GO — will be an exception to this rule. Their underlying location gaming platform is based on a valuable technology stack (on top of Google’s Maps and Places API) and millions of user-submitted locations from players of Ingress, their previous game. This gives Niantic the first structurally defensible business model in gaming. At least in 2017, we believe the only new location-based augmented reality (AR) games will come from Niantic themselves in partnership with other IP owners. Pokémon GO itself will see engagement normalize to an extent, but with significant bumps during periodic in-game events and major feature additions. We also expect to see more retail companies sign up for Niantic’s AR-based sponsored location program to drive store traffic.

Shortly after Pokémon GO hit the market, we pointed out that it was additive to the app ecosystem and did not have a meaningful impact on competition. The AR-based gameplay targeted non-consumption and captured the time users spent away from their smartphone screens. We have already seen a handful of companies from diverse industries leverage this trend to extend their customer relationship, from Sears (retail) and Swissquote (banking) to TBS’s Catch Coco (media & entertainment). In 2017, we expect many more companies to experiment with smartphone AR, particularly those that rely on a physical presence.

Pokémon GO’s spectacular growth was largely additive to the app economy and had little to no impact on other apps or games.

Virtual Reality Has a Mobile Bias

The adoption of mobile VR accessories like Gear VR and Google’s Daydream Viewer will dramatically outpace PC-based VR devices like the HTC Vive and Oculus Rift. This will be driven by significantly lower ownership costs and a wider gamut of use cases, including 360-degree video for news, sports, entertainment and even education. By the end of the year, we expect adoption of mobile VR to be roughly where in-home voice agents were in 2016.

The Amazon Echo led the hype cycle in 2016 as early adopters flocked to its futuristic premise, leading to approximately 3.5 million cumulative downloads of its companion app through November 2016. Device adoption is poised to grow thanks to an expanding range of “skills” and the recent launch of Google Home. However, voice agents will remain a niche in 2017 as the relative paucity of other connected home devices will limit the pace of mainstream adoption. 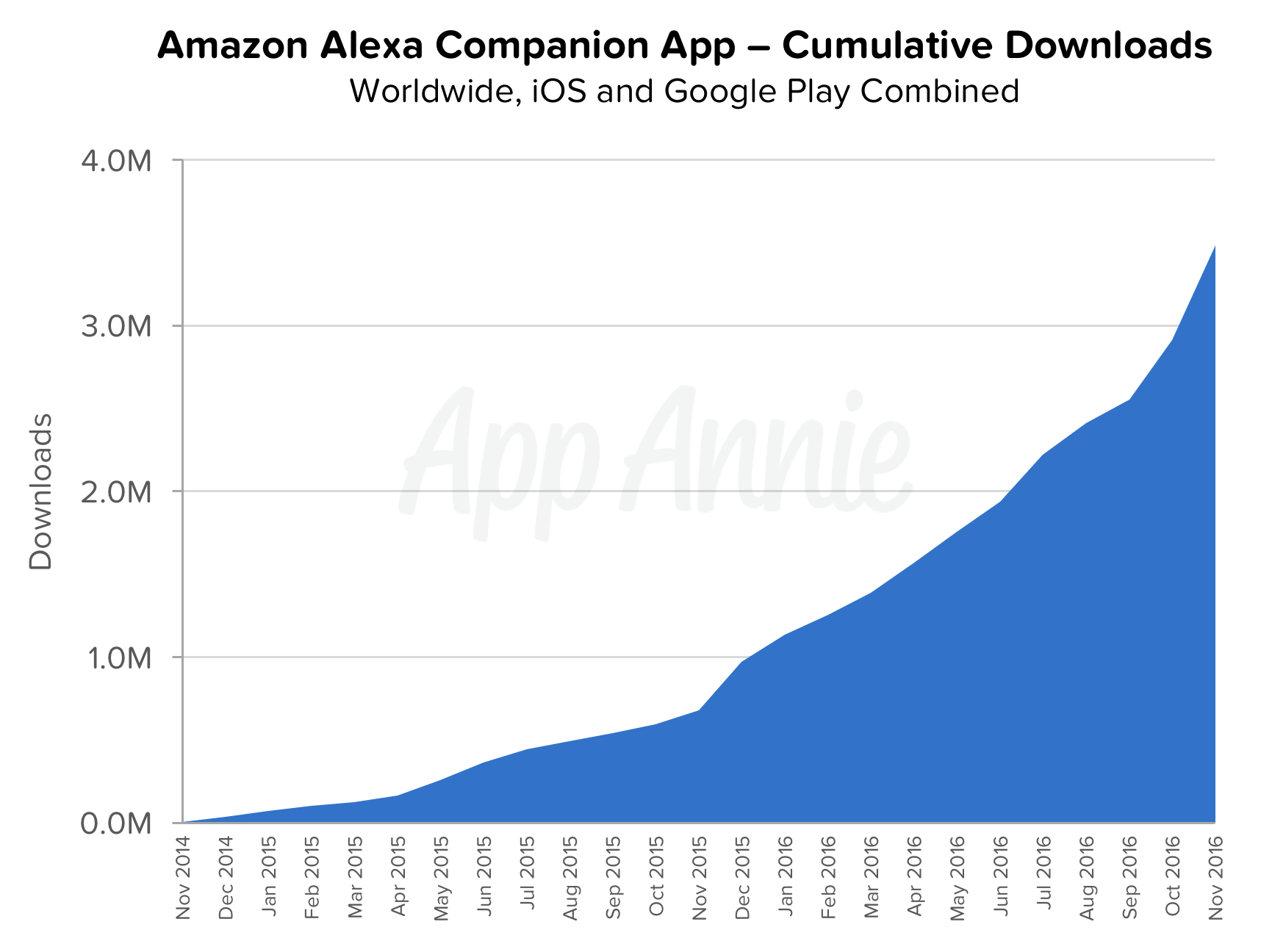 The Amazon Alexa companion app has been downloaded approximately 3.5 million times on iOS and Google Play combined. The vast majority of these downloads are from the United States.

Consumer and development interest in smartwatches hasn’t quite lived up to the hype from a few years ago. In response, we believe OEMs and platform owners will shift investments over to smart glasses, from basic camera-equipped eyewear like Snap Spectacles to full-fledged AR platforms like Microsoft’s HoloLens. But with the underlying technology still immature, standalone commercial success will remain elusive in 2017. More predictions around mobile app industry statistics and overall growth are underway, so stay tuned for more app economy insights!