Inke Figures Out How to Monetize Mobile Live Streaming 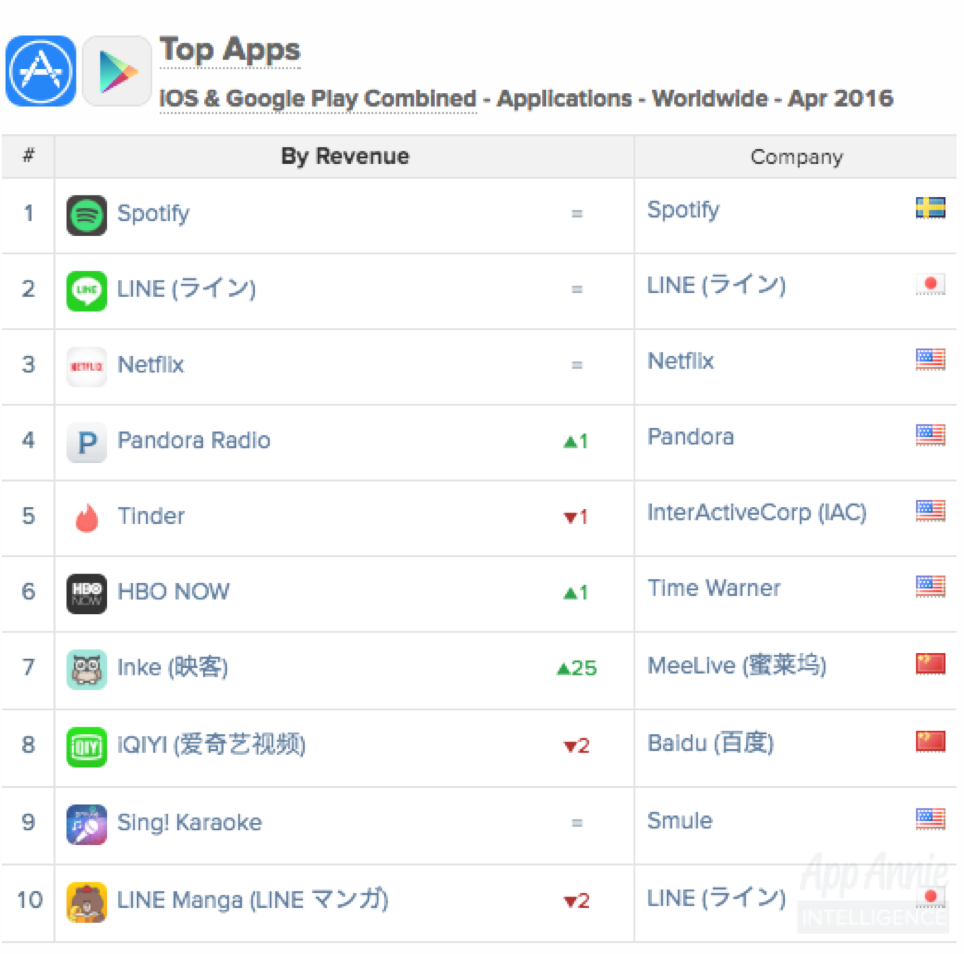 While several US live streaming apps have risen and fallen, China is the first to rapidly appear on the top worldwide revenue rankings with a new live-streaming app: Inke. Although functionality is comparable to other live streaming apps, such as Periscope and Meerkat, Inke goes beyond letting users watch others or broadcast their lives — broadcasters can enhance the viewing experience with interactive stickers and ultimately earn money from their channels. While live streaming is gaining popularity in Asia, Inke doesn’t just steal the show with its #7 rank on our revenue rankings — it’s seeing rapid growth in monthly active users (MAU) as well. 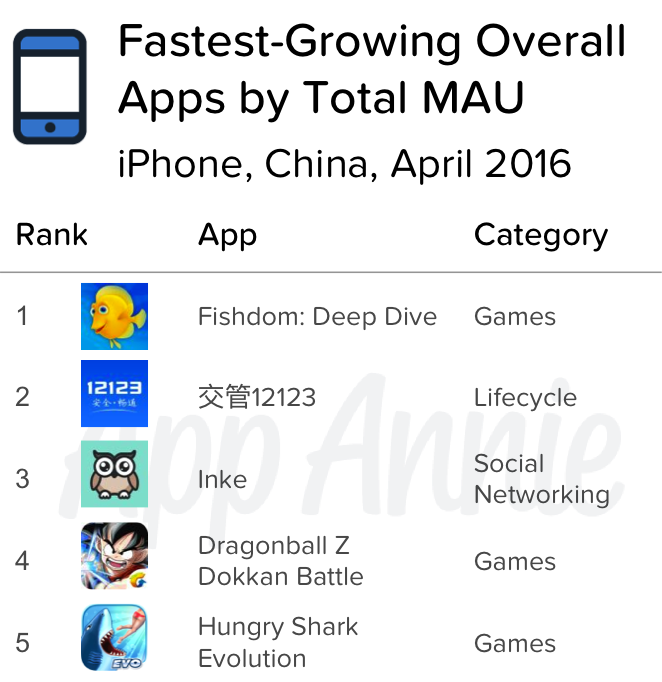 Games typically dominate when it comes to MAU growth, but Inke managed to join the rankings in China.

Inke’s downloads and revenue first started ramping up in January 2016 in China around the same time that they received $10 million in Series B funding. Its growth in popularity, driven almost entirely by China, is tied to the app’s entertainment promotional focus. Specifically, they recently broadcasted live shows for the highly popular Korean band Big Bang in mid-March. Inke uses a unique monetization model where users send virtual gifts, acquired via gem packs through in-app purchases, to their favorite channel hosts. The channel host will then receive 30% of the gift’s value, which creates an environment that encourages users to produce high-quality content while keeping the platform profitable.

While Silicon Valley’s live streaming apps also give users the opportunity to earn money, this isn’t integrated into the apps directly. For instance, broadcasters on Periscope and Meerkat can ask for performance tips via a digital tip jar or users can give tutorials and include links for viewers to buy products. While many of these users take advantage of the monetary benefits of live streaming, the apps themselves are not monetizing directly within the app.

This contrasts with Inke’s revenue model, since it gives the app an opportunity to not only make significant revenue with in-app purchases, but additionally through in-app advertising and partnerships. Publishers should look to Inke as an example of how to incentivize users to broadcast and engage with channels. 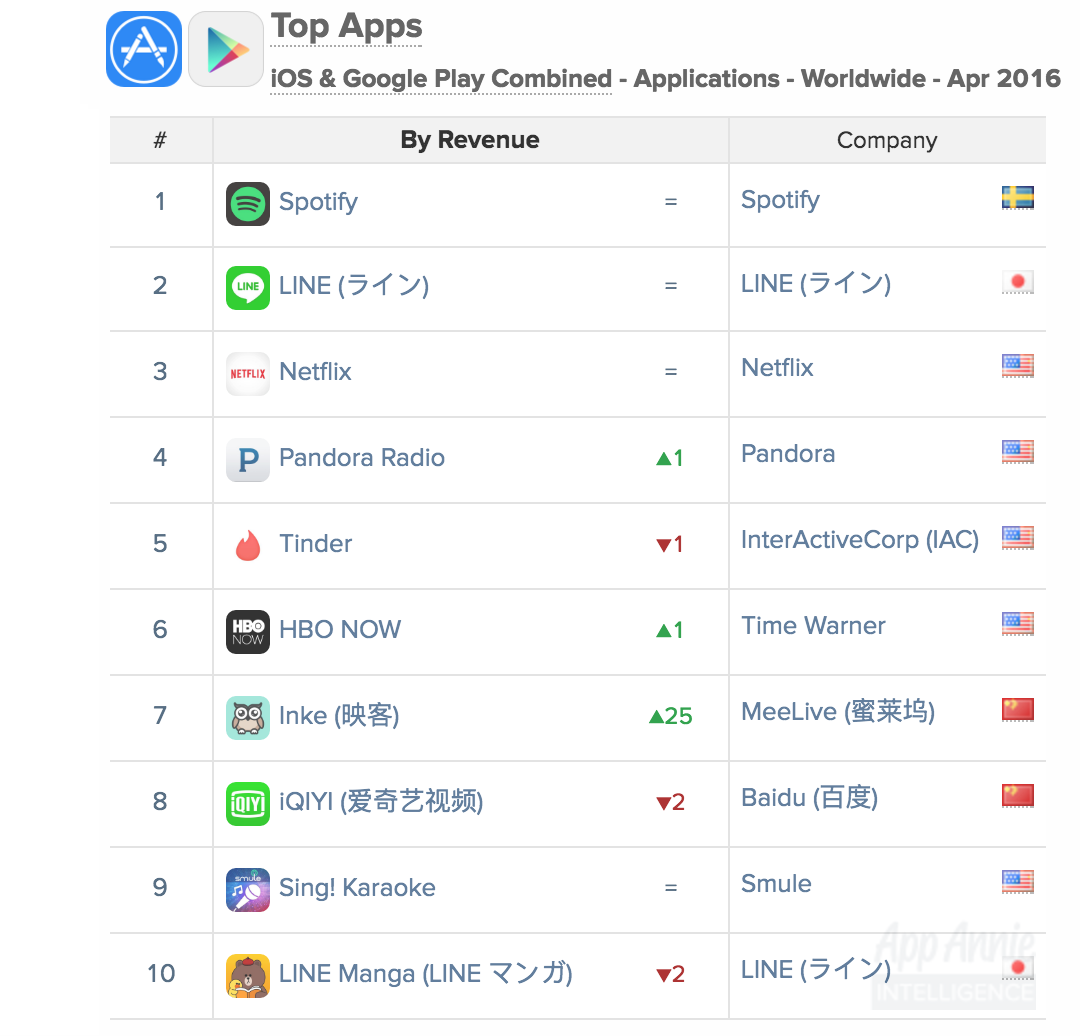 For the past few months, Pandora has been steadily building its revenue in the United States through continually leveraging the success of its subscription model. Due to the dynamic nature of the music category, and the need to stay competitively up-to-date, lately Pandora has been focusing on exclusives.

Exclusive content has proven to be a key component to revenue growth for the Music category. TIDAL is a prime example of a Music app achieving revenue growth with exclusive streaming launches from Kanye West and Beyonce. Pandora similarly took advantage of Beyonce’s widespread popularity by announcing that the songs from Lemonade could be heard on their Internet radio service four days after the exclusive HBO and TIDAL release. Other exclusives include a partnership with Serial, a popular true-story crime investigation podcast, for streaming of a new season released in early 2016 along with the previous season. Pandora also announced an exclusive streaming partnership with This American Life, a weekly radio show, which started at the end of this April.

Additionally, with Pandora’s acquisition of on-demand streaming service Rdio in October 2015 and the recent appointment of founder Tim Westergren as CEO, there are big changes on Pandora’s horizon. With an on-demand streaming feature to launch by the end of 2016, Pandora’s product offering will compete with that of Spotify, TIDAL, Apple Music and even SoundCloud with its recent release of SoundCloud Go. Pandora can take advantage of its strong monthly active user (MAU) position in the US across both Apple and Google’s operating systems.

Pandora’s lead in MAU shows the potential to increase revenue with a future release of an on-demand music streaming subscription service. 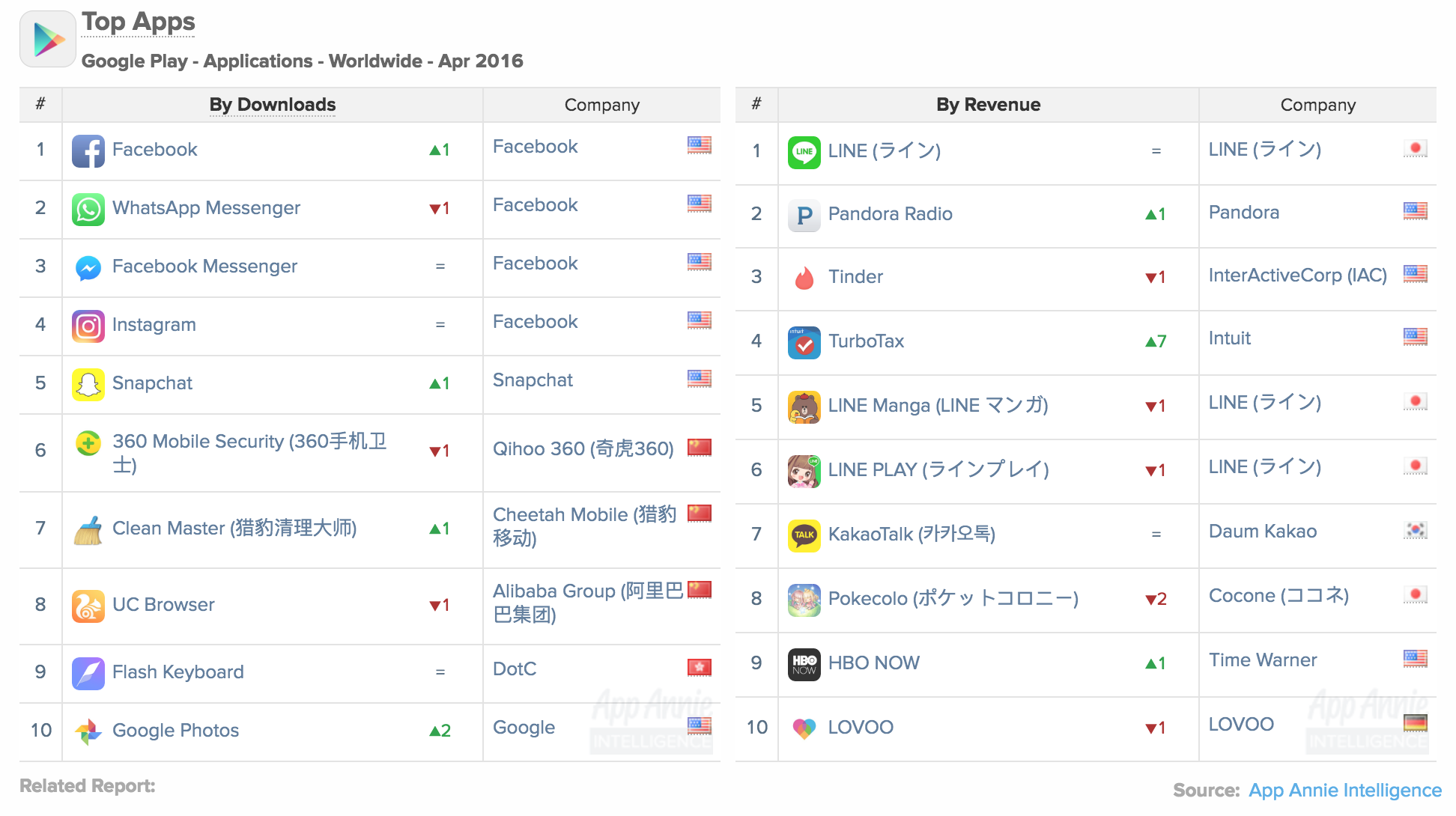 Seasonal success has contributed to revenue growth for several apps this April. TurboTax re-entered the top worldwide revenue rankings for Google Play. This year, the app saw a rise in January, but its revenue spiked again closer to US’s tax deadlines in April. This can be explained by how 20–25% of people tend to do their taxes at the last minute.

HBO NOW continues to be a moneymaker, this time seeing a boost in revenue on Google Play. In-app subscription purchases allow users to set up an HBO NOW account without leaving the app experience. We anticipate that HBO NOW will experience a spike in revenue in May as users’ trial periods expire following the sign-ups due to the premieres of Game of Thrones and Silicon Valley from earlier in April. 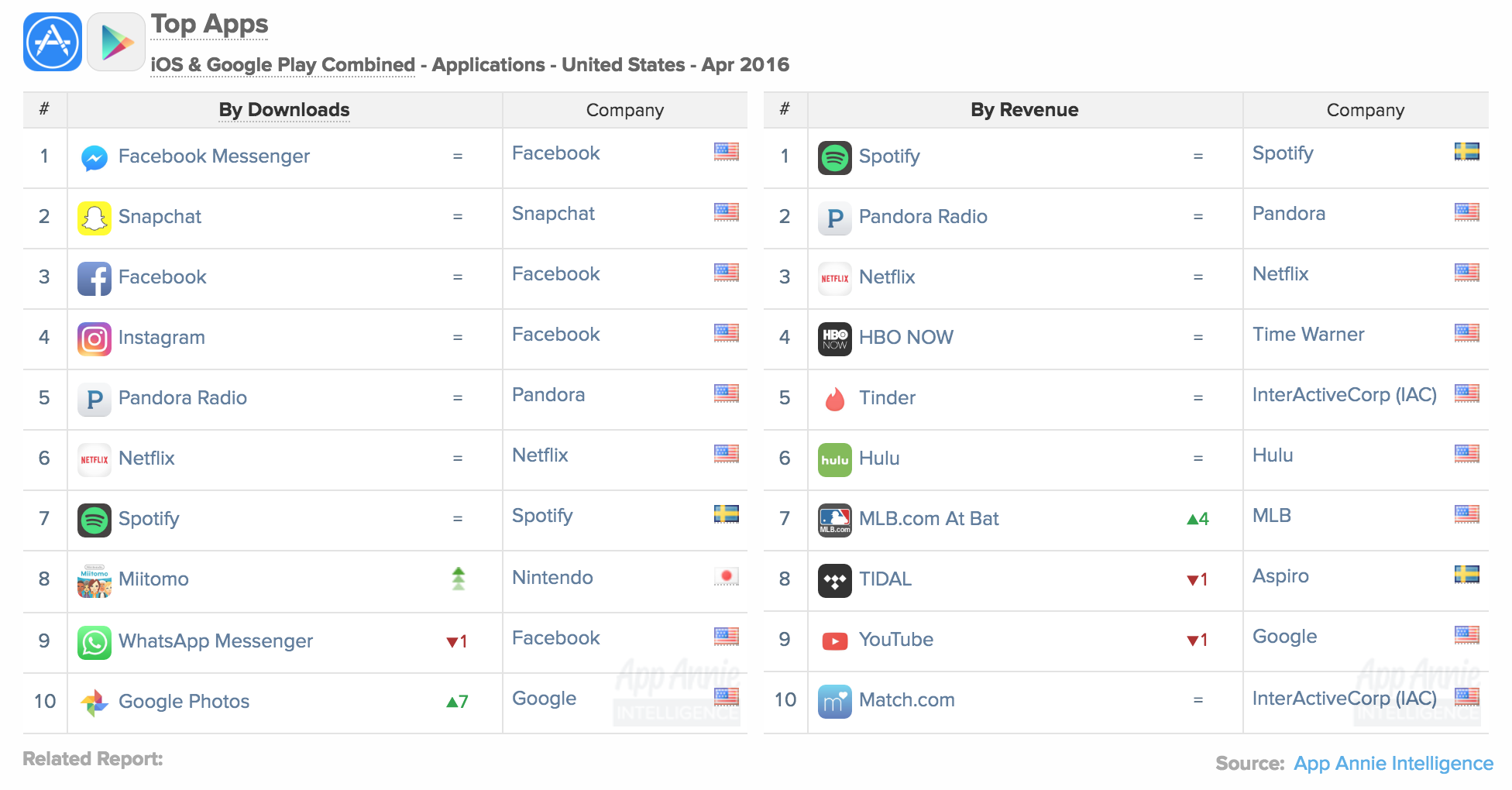 MLB.com At Bat is a yearly contender in top apps: last year, it was the top-earning US Sports app by combined iOS and Google Play revenue and #3 by iPhone MAU. This year, MLB.com At Bat resurfaced in the top revenue rankings for the US following Opening Day of the 2016 MLB season in early April, where viewers could watch the game via the app. The app’s success is even inspiring other sports leagues looking to achieve similar results: the division in charge of the app is partnering with the National Hockey League (NHL) to build their streaming and mobile products.