As we saw in January 2015, the holiday period usually marks an uptick in dating apps so it’s not surprising we see worldwide revenue growth for Badoo and Tinder. Despite being displaced by Netflix in the top rankings, the latter also experienced revenue growth in December. Badoo rose 3 ranks to break into the top 10 worldwide iOS revenue chart for the first time since March 2015, driven mostly by growth in the United States, the United Kingdom and France. 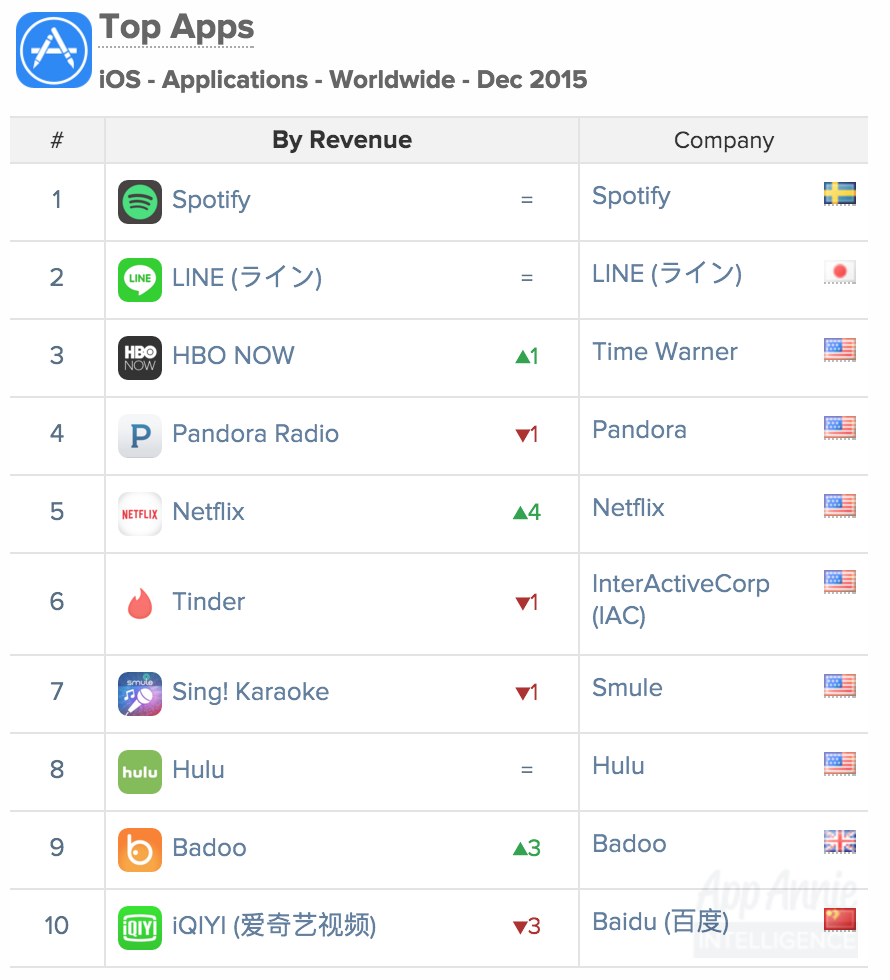 LOVOO and Tinder maintained strong performance in the top Google Play revenue chart for apps outside of games. Across both the iOS App Store and Google Play, Tinder continued to be the highest revenue-generating mobile dating app in December. As we identified in our 2015 Retrospective report, Tinder led the monetization of dating apps for 2015.

Dating apps performed particularly well in the country hosting the “City of Love.” AdoptAGuy maintained its number 1 rank on France’s Google Play revenue charts for both dating apps and apps outside of games. In addition to revenue, France saw strong growth for dating apps in terms of usage across the board. LOVOO rose two ranks by monthly active users on Android Phones for dating apps in December. Publishers too can feel the love as increases in app usage can pave the way for monetization in the future, both through in-app purchases and through mobile advertising.

Dating apps continue to be a strong source of revenue in the app economy, and we are eager to see how the space evolves in 2016 with portfolio acquisitions, diversified monetization plans and market growth. Grindr kicked off the new year with its announcement of selling its majority stake to Beijing Kunlun Tech Company. It was a strategic move by both companies, diversifying Beijing Kunlun Tech Company’s portfolio beyond gaming and reaching countries outside of China and providing Grindr with a stronger foothold in China where Blued is a major competitor. 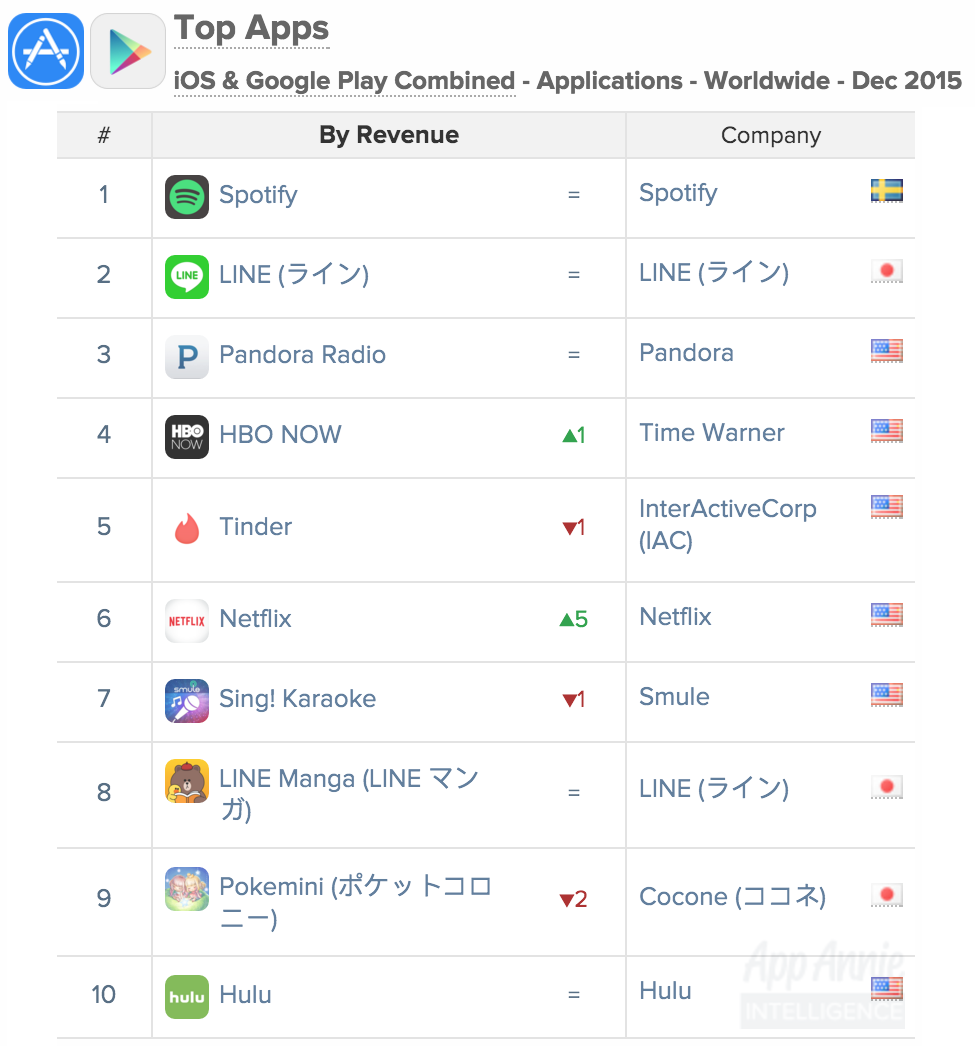 Netflix now boasts over 75 million members globally, according to the company’s Q4 earnings report. With this large of a presence, it’s no wonder Netflix’s ripples are felt throughout the app market. As we identified in last month’s Worldwide App Index, Netflix broke into the top revenue charts for iOS apps outside of games. Only one month later, Netflix has moved up the chart to claim the #5 spot by iOS revenue and the #6 spot by iOS and Google Play combined revenue in December. This growth is driven entirely by revenue from the iOS App Store as Netflix in-app purchases are currently only available on iOS devices.

Notably, after only two full months of in-app subscriptions, Netflix has surpassed competitor Hulu with Hulu maintaining the #10 ranking by combined iOS and Google Play revenue. HBO NOW sustained its position as the revenue leader of video-streaming apps. However, the gap is narrowing as Netflix’s quick rise up the charts poses it to be within striking distance of the current video-streaming leader. Notably, HBO NOW has been able to maintain its lead despite only being available in the US.

While the US represents the lion’s share of Netflix’s revenue, gains were seen on a global scale. With the recent expansion into 130 countries, it is likely that revenue from in-app subscriptions will continue to climb.

The introduction of in-app subscriptions to video streaming has dramatically shifted the revenue landscape in the app economy. In December 2014, no video-streaming apps were present in the worldwide top revenue charts. In contrast, one year later there are three in the top revenue charts for iOS apps outside of games. We are interested to see if the coming months offer a reshuffling among the video-streaming giants. 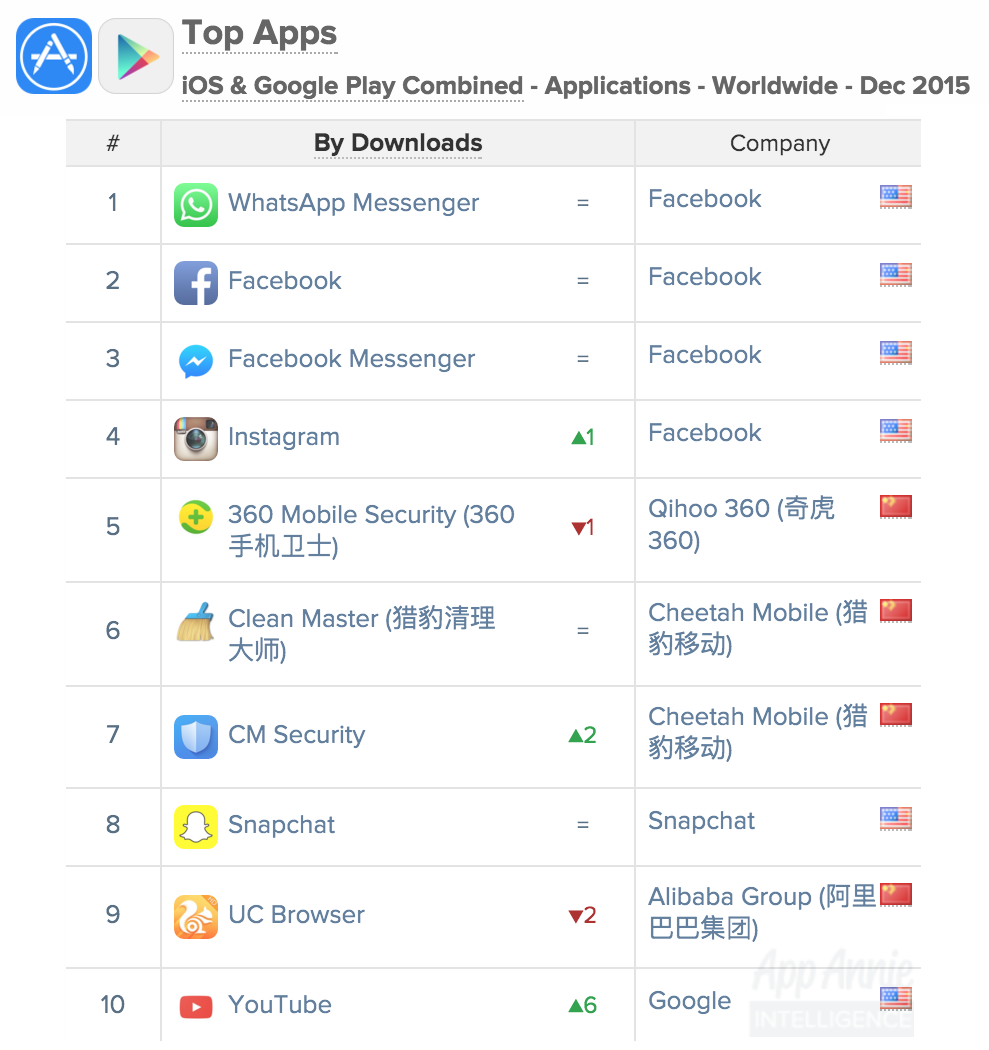 The huge increase in month-over-month downloads was largely driven by download growth in Mexico, Brazil and the US on Google Play. Downloads peaked in the days following Christmas, which could be a result of the seasonal uptick from Christmas gift purchases. 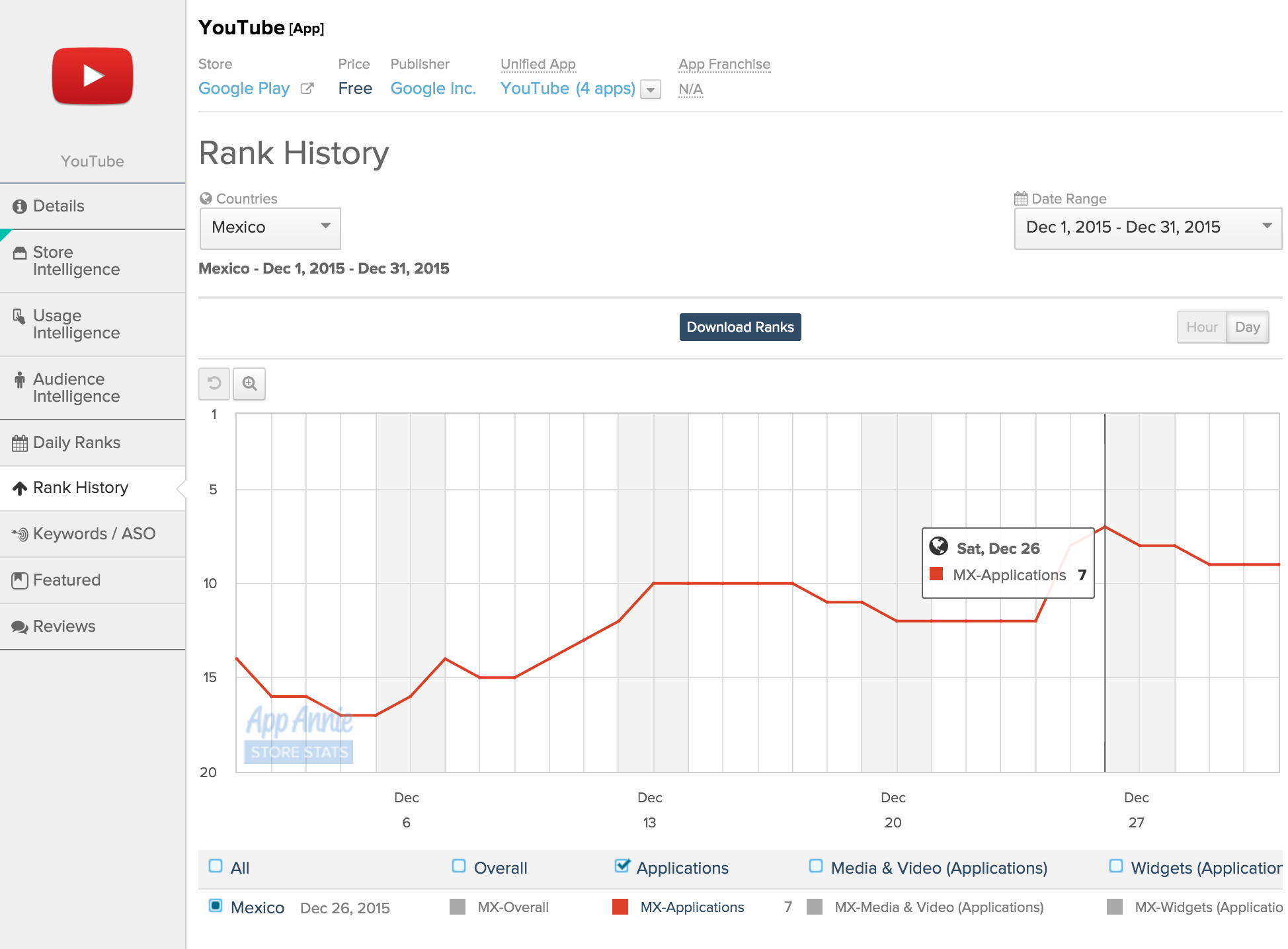 YouTube downloads on Google Play peaked on the day after Christmas in Mexico.

A widely used app ranking at #2 by monthly active users in Mexico, YouTube is surpassed only by WhatsApp Messenger on Android Phones. Following the large increase in downloads, we’re interested to see if usage continues to grow in the coming months. 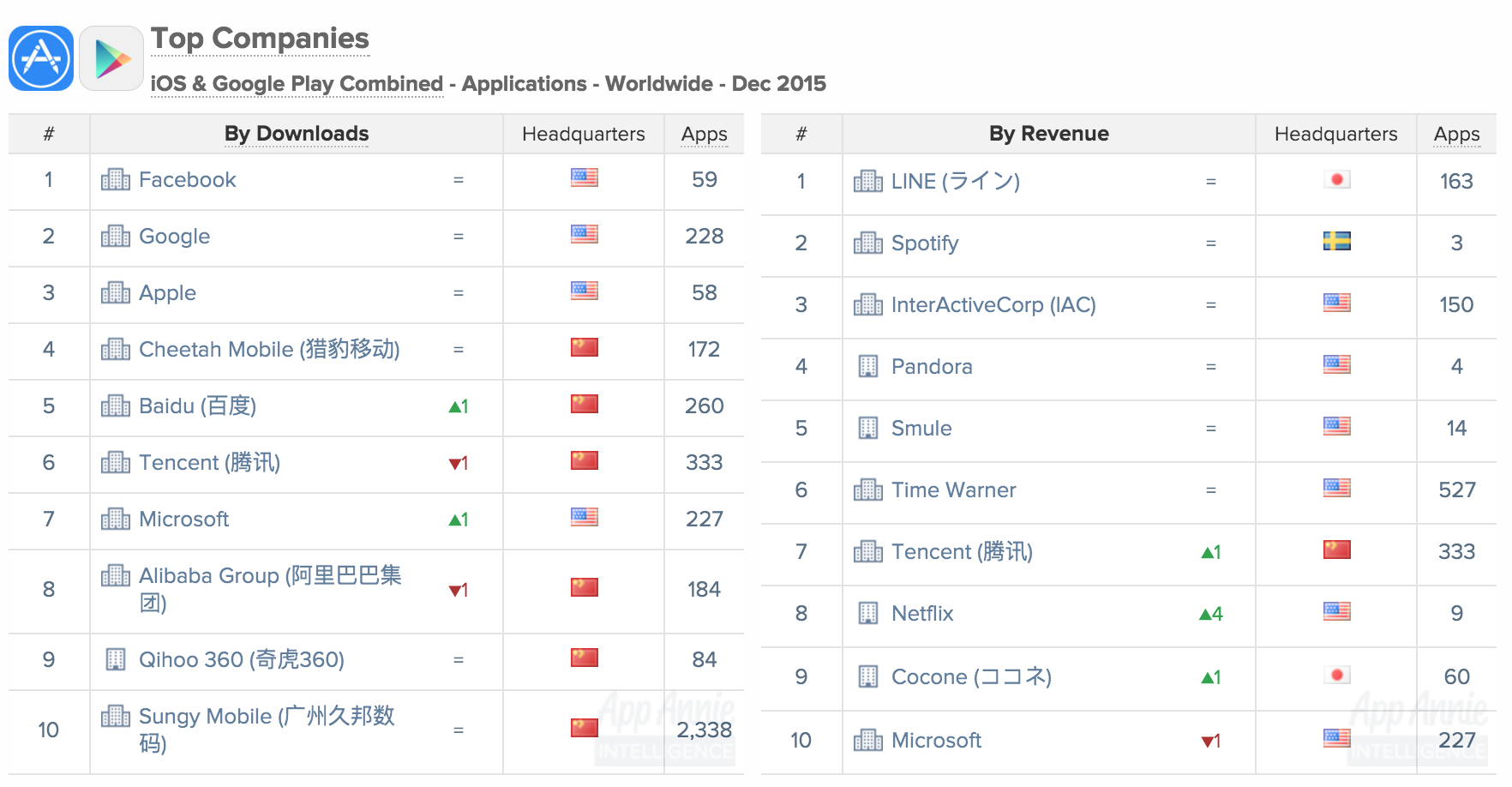 For the complete list of December’s top apps and app publishers around the world, click the chart above.