TurboTax Reappears as US Tax Season Closes in 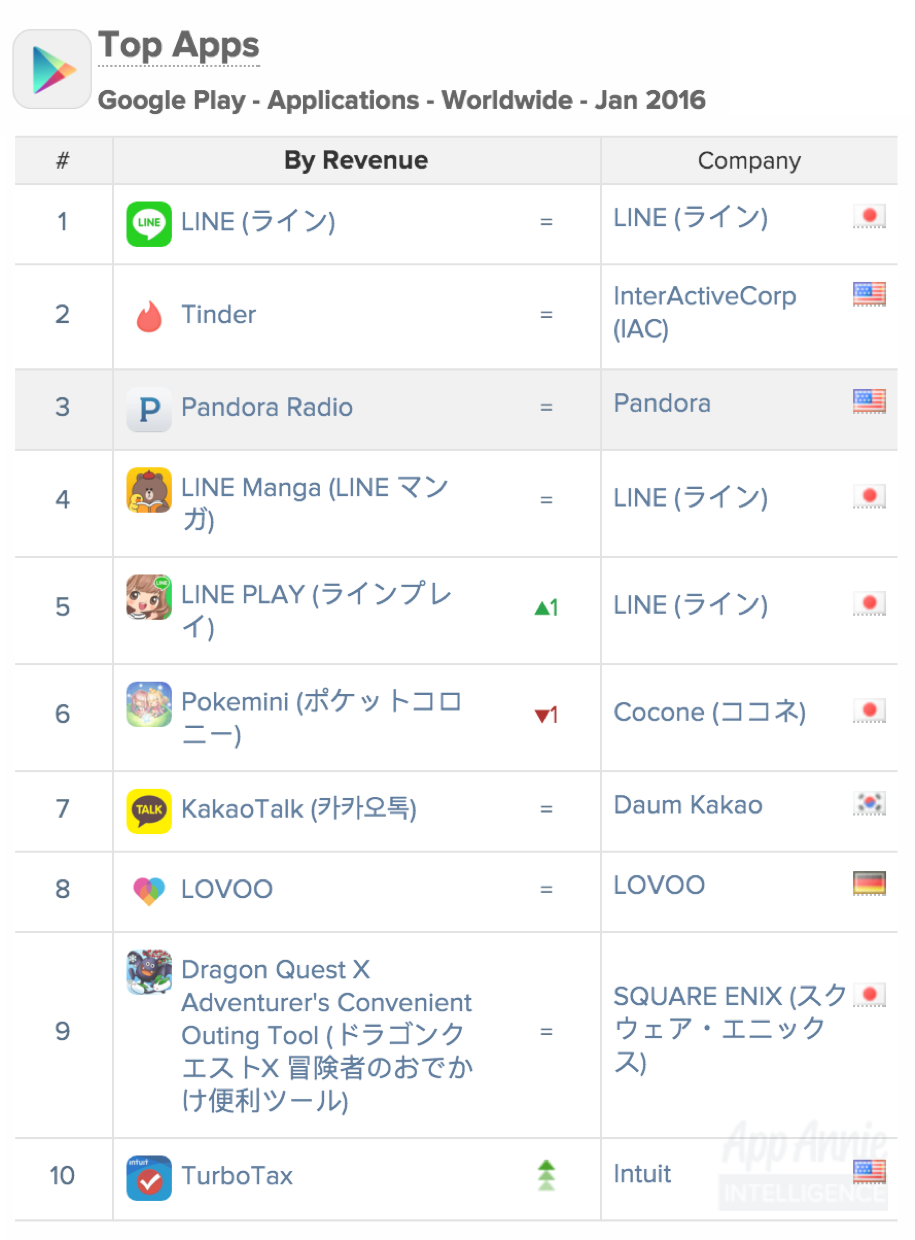 Tax season is upon us and Intuit’s TurboTax has re-entered both the Google Play and iOS Revenue charts.

Given its seasonal value, TurboTax is an annual entrant to the App Annie Index. The app allows users to prepare and file their tax returns for free, with paid upgrades giving access to additional and more complex features. On the back of the app’s performance, Intuit has also entered the global top 10 for company app revenue on Google Play and iOS combined. 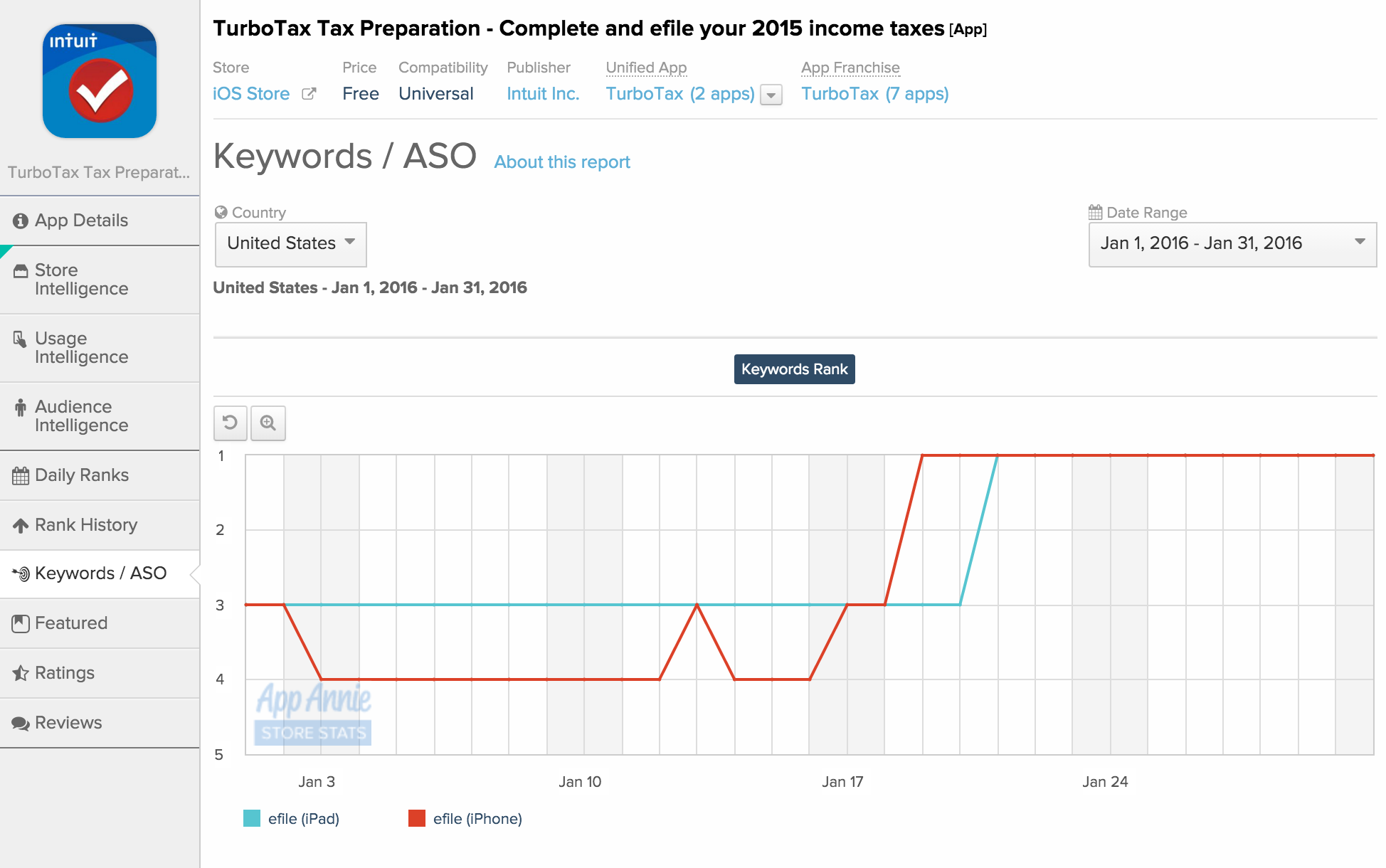 By the end of January, TurboTax was the number one result for iphone users searching for ‘tax’ or ‘efile’

This year TurboTax was supported by a series of commercials featuring famously intelligent spokespeople explaining how easy the software is to use, culminating in a Super Bowl ad starring Anthony Hopkins. TurboTax followed in the footsteps of mobile games like Game of War: Fire Age, Clash of Clans and Mobile Strike, using celebrity endorsements in a high-profile Super Bowl ad.

The app’s strong performance looks set to continue for a at least the near term. February to April has traditionally been TurboTax’s strongest time period, and its January 2016 ranks for revenue and downloads are significantly higher than in January 2015. This provides Intuit with a strong base for monetization as the mid-April tax deadline approaches. TurboTax was one of the top generating apps in February last year, and we’ll be keeping an eye on how it performs in 2016. 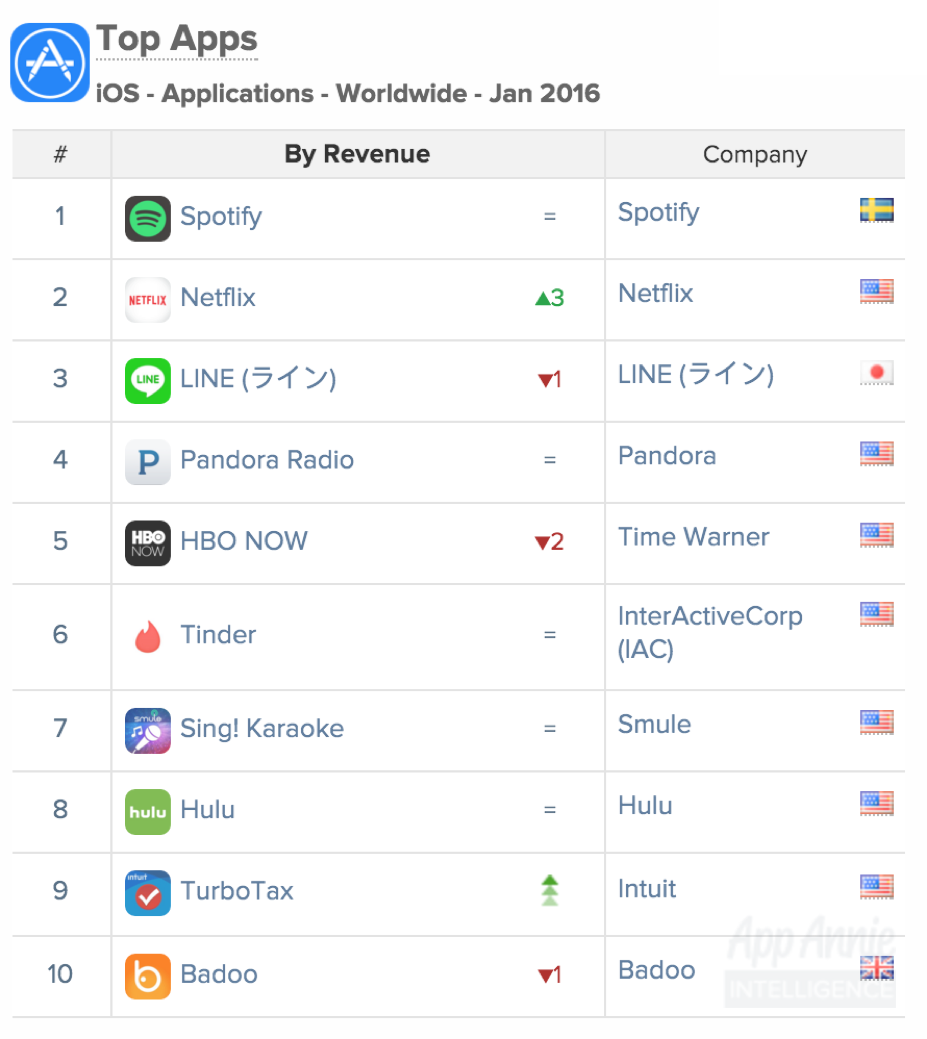 As reported in our 2015 Retrospective, consumer demand for streaming apps is on the rise and cord cutting is more prevalent than ever. However, competition in this exciting space continues to heat up. We noted in our December Index that Netflix had moved into striking distance of current revenue leader HBO Now. As of January, it had taken first place on iOS for video streaming apps.

It’s important to note that Netflix’s in-app purchases are currently only available on iOS devices, but even when we factor in Google Play, Netflix maintains the number 1 spot among video on demand providers for worldwide in-app revenue.

Earlier this month, Netflix released its Q4 2015 earnings report, significantly beating analyst expectations. Netflix identified the opportunity presented by emerging markets and has committed to continue improving its mobile experience and bandwidth efficiency to take full advantage. In early January, Netflix also launched in more than 130 new countries including India and Russia. It’s already broken into the top 20 ranks for free downloads in the Google Play Entertainment category in India, Indonesia and Nigeria. 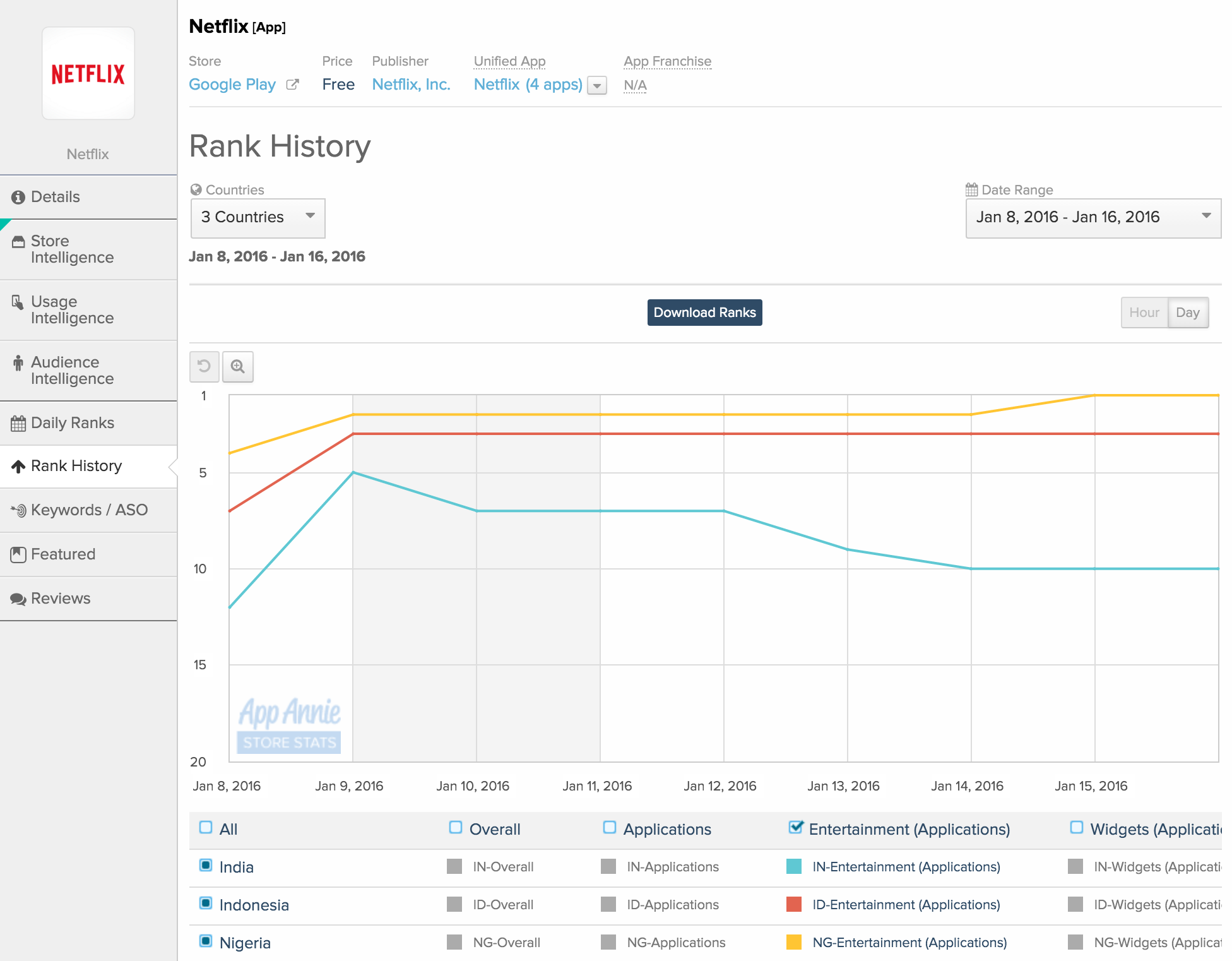 Netflix entered the top 20 for downloads in the Google Play Entertainment category in emerging markets India, Indonesia and Nigeria 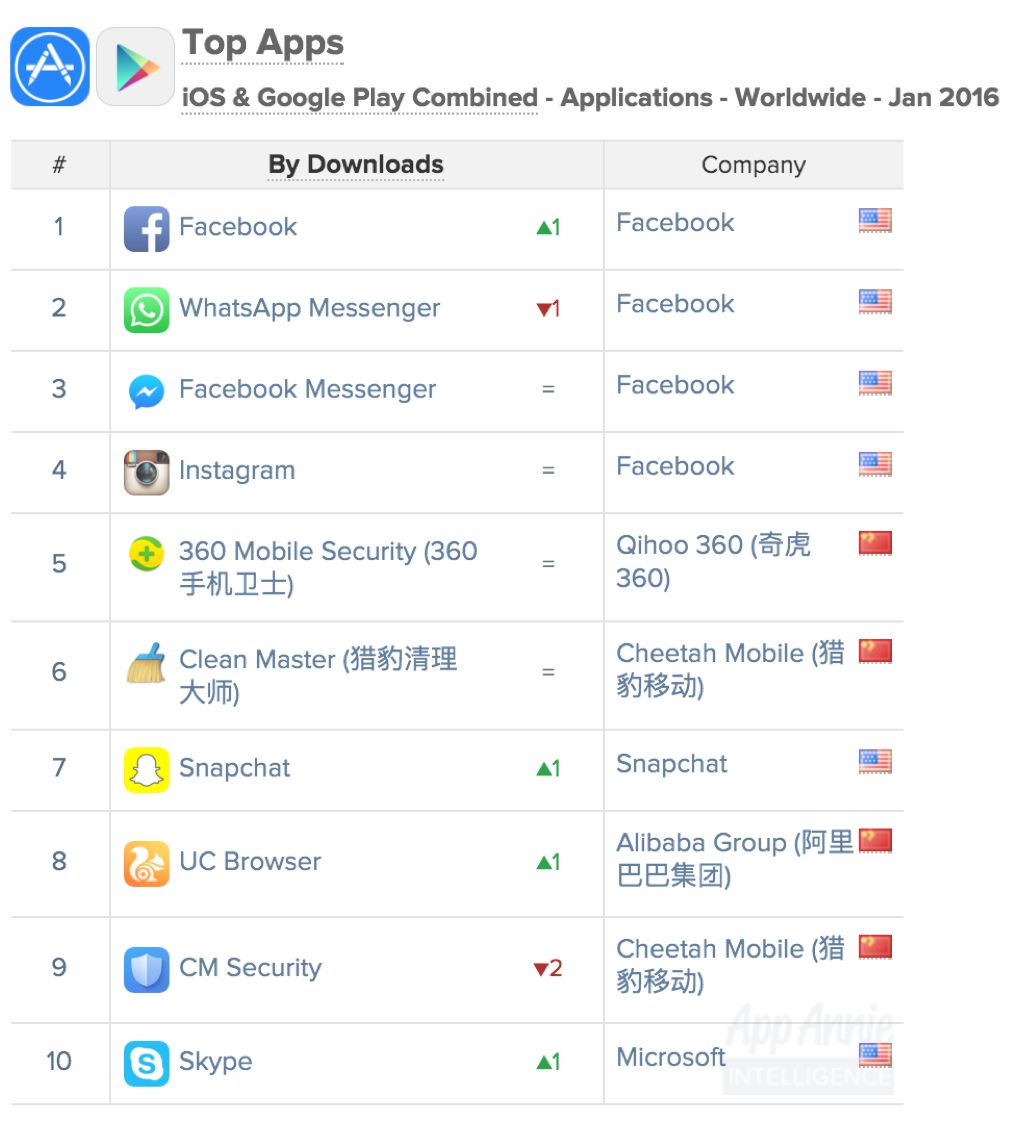 Apps are continuing to eat the web and as Facebook’s apps continue to battle for position at the top of the charts, the company’s recent earning report has demonstrated the growing importance of mobile within its portfolio.

This month Facebook posted quarterly revenue that surpassed $5bn for the first time ever, 97% of which came from advertising. The company stated that mobile revenue represented approximately 80% of all advertising revenue for Q4 2015, up from 69% in Q4 2014. The importance of video ads was also acknowledged as Facebook now boasts 500 million daily video viewers.

However, Facebook is not unique among internet giants in drawing success from mobile growth this month. Chinese e-commerce giant Alibaba, which saw its worldwide download rank increase on Google Play, released favorable company revenue results at the end of January, attributed primarily to the growing prevalence of mobile shopping in China. To illustrate the scale of mobile growth — 68% of Alibaba’s Gross Merchandise Volume came from mobile in 2015 compared with only 42% the previous year. 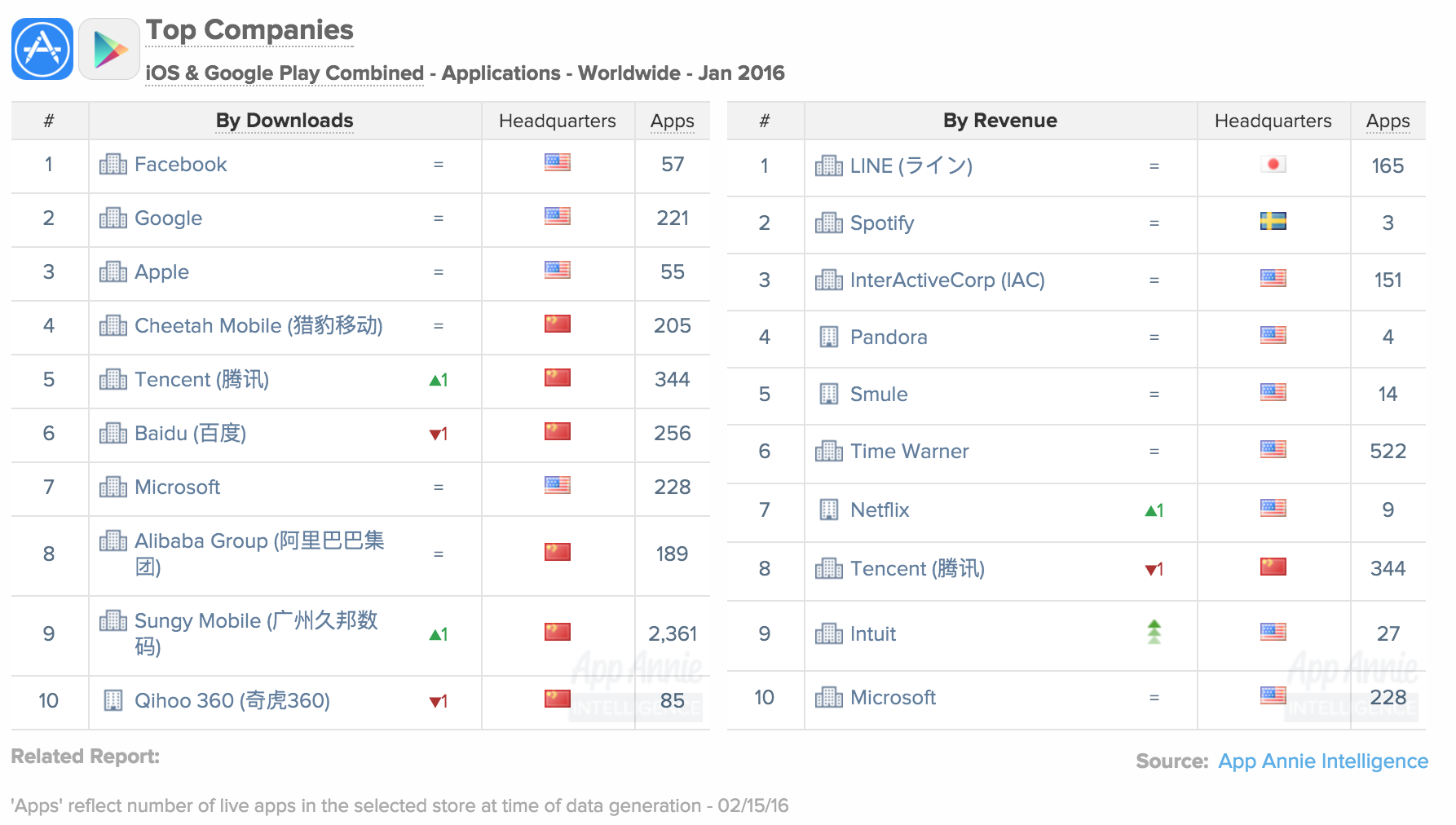 For the complete list of January’s top apps and app publishers around the world, click the chart above.