The App Annie Apps Index brings you the hottest mobile app properties outside of games across both the iOS App Store and Google Play.  To find out what’s happening in game apps, please check out our March 2014 Games Index.

The information contained in this report was compiled using App Annie Intelligence, the industry-leading market data solution for identifying opportunities in the app store economy. It provides the most accurate market estimates for global app downloads and revenues - to learn more, take the tour or request a demo today.

This Index report also uses App Annie’s exclusive DNA, providing unparalleled insights into the major players and trends in the app stores. App Annie DNA creates the only rankings that incorporate the complete set of companies’ subsidiaries and related publishing accounts. In addition, each app’s downloads and revenues are ranked using all versions of the app, regardless of platform compatibility, pricing or language. App Annie DNA is available in App Annie’s free Store Stats, and as part of App Annie Intelligence.

Microsoft released its Office for iPad suite of apps on March 27, and they had an immediate impact on the publisher’s rankings. The popularity of these Productivity apps led to an increase in Microsoft’s rank for publishers by monthly iOS downloads, while offering Office 365 subscriptions as in-app purchases also boosted its rank in monthly iOS revenue. In both downloads and revenue, Microsoft Office for Word provided the biggest gains for Microsoft.

Tax season made a big impact in the February Apps Index, and March saw another new season influence the top charts. As baseball season got underway in the United States, MLB jumped up the publisher revenue rankings in both the iOS App Store and Google Play. Its app, MLB.com At Bat, provides coverage, news, and features to help fans follow the Major League Baseball season. Like the Office for iPad apps, MLB.com At Bat uses an in-app purchase subscription service that has proven to be an effective annual revenue generator. MLB.com At Bat appeared in the March 2013 Apps Index, and reached the Top 10 apps by revenue outside of games in the iOS App Store and Google Play in March 2014.

While WeChat attracts most of the headlines for Tencent, App Annie Intelligence shows that the publisher’s download gains in March came largely from other apps. Online video service 腾讯视频 (Tencent Videos) made steady gains throughout March, while 腾讯新闻 (Tencent News) saw its ranking rise in China in early March.

Rakuten’s move up the Google Play publisher rankings in March was largely driven by an increase in downloads of Viber in Brazil. The messaging app experienced a sharp rise in download ranking in Brazil in late February. The rise coincided with the release of Viber Out, the app’s phone call service, in Brazil. Viber Out was offered free in Brazil as a marketing push for approximately one month. The Q1 Market Index identified Brazil as the second largest market for Google Play downloads, and is therefore likely to be a key country in the ongoing battle between messaging apps. 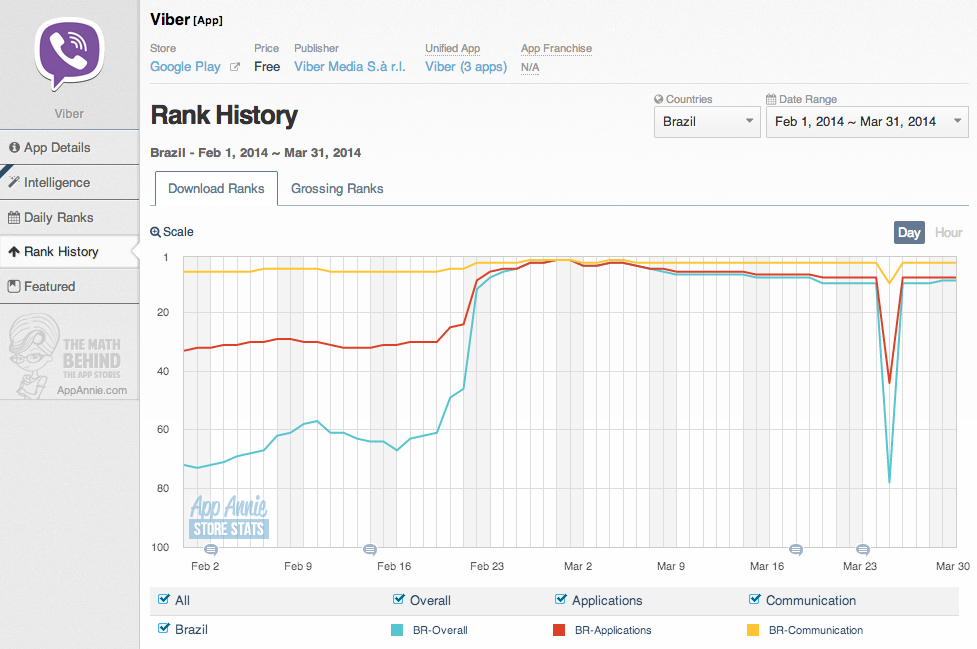 Gains for Viber in Brazil coincided with a marketing push for Viber Out, offering free calls to non-Viber phones. 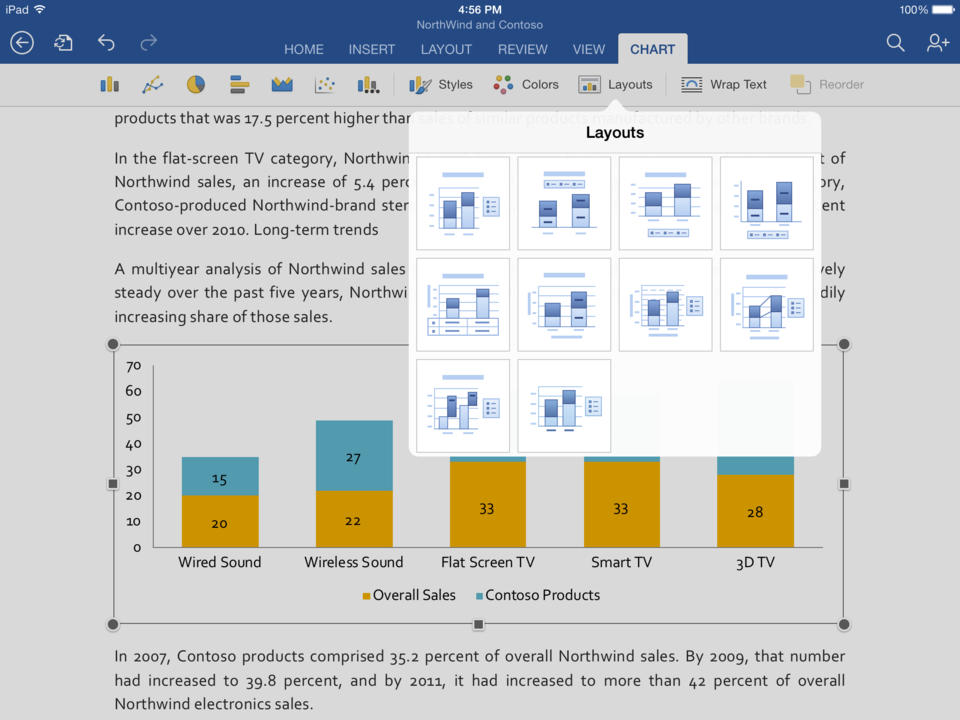 Microsoft Word for iPad led the Office for iPad apps in downloads and revenue.

The February Apps Index saw tax season play a major role in iOS revenue, but in March a much more enjoyable season kicked in. As the Major League Baseball (MLB) season got underway in the United States, MLB made significant gains with its app MLB.com At Bat. Like the Office for iPad franchise, MLB.com At Bat monetizes with a subscription service available through in-app purchases. The subscription offers live coverage, news, and other features covering the baseball season.

MLB, through MLB.com At Bat, was also the biggest mover in monthly Google Play publisher revenue in March, scoring big in the United States and Canada. A similar rise was noted in the March 2013 Apps Index as the previous baseball season began. This appears to be an ongoing cycle in the app rankings that reflects the major sporting seasons in the United States, with NHL Interactive rising in October 2013 as hockey season began. The subscription model of in-app purchases makes these apps an effective annual earner for the sports app publishers.

嘀嘀打车 (Didi Dache), the China-based taxi booking service, made substantial gains to join the Top 10 apps outside of games by monthly iOS downloads in March. The service now reports over 5 million taxi bookings a day, up from around 350 thousand per day in January. Publisher 小桔科技 (Xiaoju Technology) recently closed a $100 million funding round, which included Tencent as a key investor. Integration with WeChat has been an important factor in the growth of 嘀嘀打车 (Didi Dache), utilizing the messaging app’s 355 million monthly active users, as well as offering fare discounts for using its mobile payment service.

LINE reached the Top 10 apps by monthly iOS downloads outside of games after a strong international performance in February, and continued these gains in March. In particular, App Annie Intelligence shows that the app saw big gains in the United States around mid-March. This has clearly been identified as a key market for LINE. The publisher is making substantial investments in marketing in the United States, rumored to be around $10 million. In addition to the overseas markets, LINE continued to perform strongly in Japan, making steady gains during March. 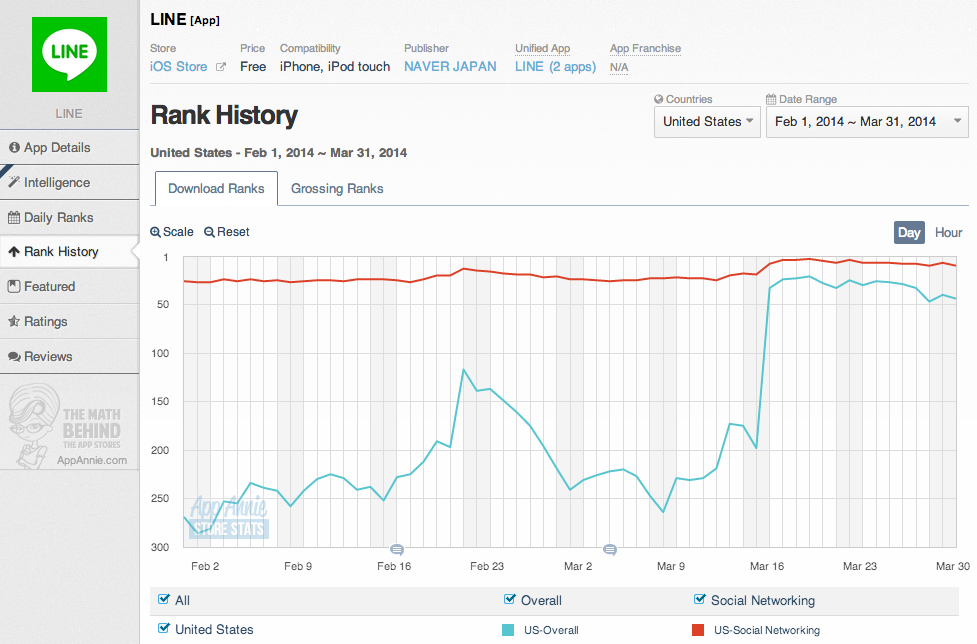 LINE saw a substantial jump in download rank in the United States in mid-March as marketing efforts intensified.

The Q1 2014 Market Index noted the growing prominence of anti-virus apps on Google Play. In March, Clean Master Security showed strong worldwide growth, which lifted it into the Top 10 apps by monthly Google Play downloads outside of games. Growth was led by the United States, Mexico, and Brazil. Alongside the continued strength of Clean Master, Clean Master Security gave Kingsoft Internet Software two of the Top 10 apps outside of games in March. This will be a welcome boost as the company, now called Cheetah Mobile, filed for IPO on April 2. The IPO is looking to raise around $300 million.

The start of the Major League Baseball season lifted MLB.com At Bat into the top five apps by monthly iOS revenue outside of games. The monthly and annual subscription in-app purchases created a significant jump in the app’s revenue rankings in late February in the United States. This coincided with the release of the 2014 update to MLB.com At Bat. A similar rise was evident in Canada, though its rank peaked towards the end of the month as the season got underway.

Deezer returned to the Top 10 iOS apps by monthly revenue outside of Games in March. App Annie Intelligence shows it continued to perform strongly in France, Brazil, and Mexico, with these markets leading revenue growth. Deezer will look to continue these gains, and announced an array of new features for mobile devices, including Flow music discovery and Playlist Radio. These features create more direct competition with other music streaming services, and provides a freemium model for mobile devices similar to Spotify’s. Deezer is also seeking to expand its audience through a partnership with Samsung, giving free access to Deezer’s Premium+ subscriptions to purchasers of the Samsung Galaxy S5 smartphone.

Comics, along with publisher comiXology, were a regular feature of the Apps Index throughout 2013 and have appeared throughout 2014 so far. Its continued strong performances appear to have caught the attention of major tech companies, as comiXology announced its acquisition by Amazon in early April.

For those of you who also are looking for an update on top apps in gaming, please check out our March 2014 Games Index.