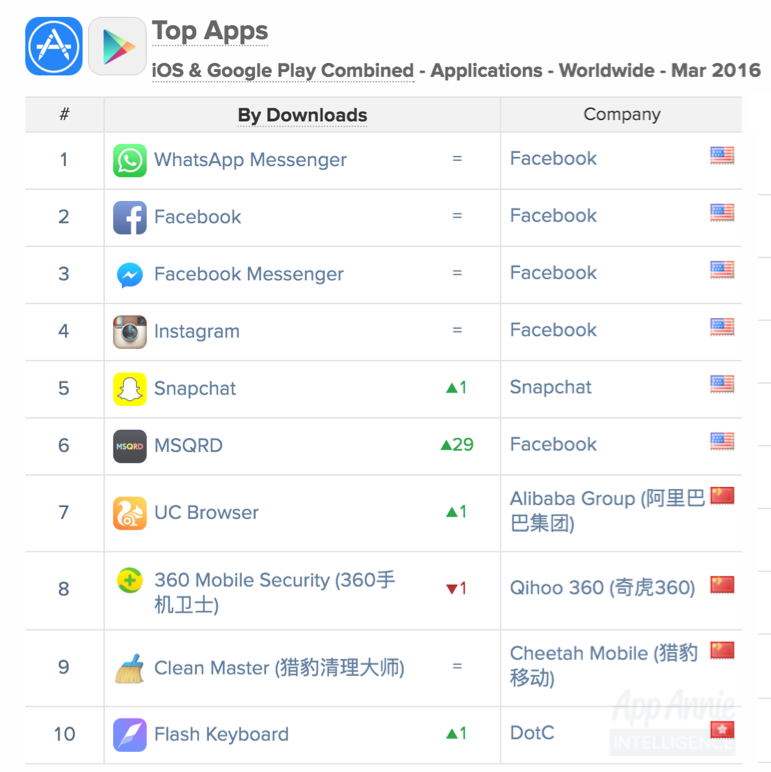 Among the leading photo sharing apps, Instagram and Snapchat have accounted for countless selfies traversing mobile networks. However, it was MSQRD — an app that creates whimsical facial overlays that can be shared via other social apps — that saw the largest jump in March as it launched on Android. The app hopped an impressive 29 ranking slots as its publisher was acquired by Facebook during March, inching close to its complementary new siblings Facebook Messenger and WhatsApp Messenger. Facebook recently noted that those services now carry a combined 60 billion messages per day, dwarfing the number of SMS messages at their peak daily rate.

MSQRD’s filters include many comical effects that can be shared as photos or video clips.

MSQRD is Facebook’s answer to Snapchat’s popular selfie lenses, allowing users to apply a selection of face filters — including the wildly viral face swap — and share them with their contacts list or across major social networks.

With Facebook’s strong presence in messaging apps, its plans for the category stand to greatly influence the space. Based on announcements at its F8 developer conference, those could include a lot more video, more VR, and more chatbot interaction. The company has opened up its Facebook Live broadcasting feature and is embracing 360-degree video in partnership with its VR subsidiary Oculus. It has also gotten off to an early start in chatbot experimentation by integrating them into Facebook Messenger.

A Revenue TIDAL Wave for iOS 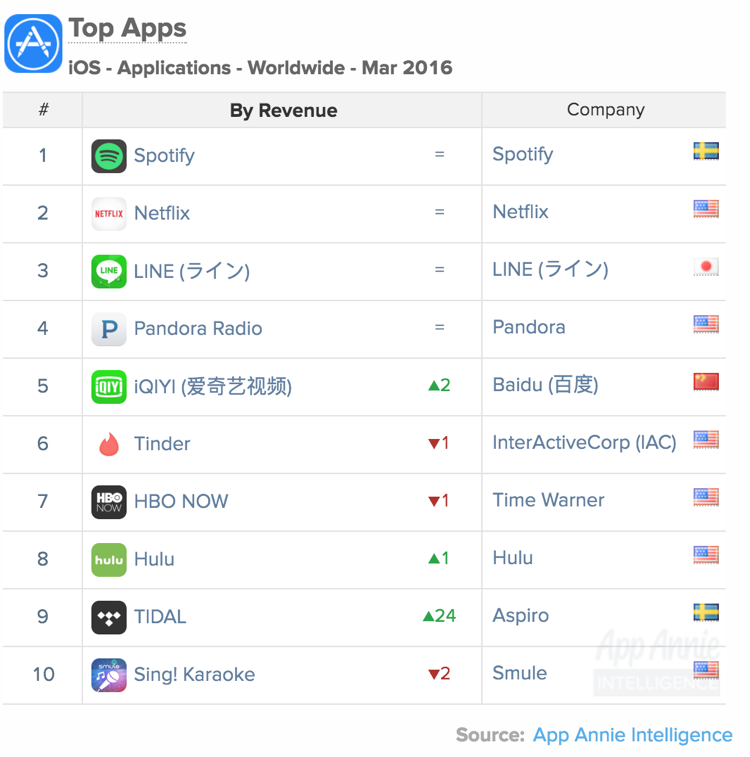 Messaging and sharing may top the download list, but the top 10 apps by revenue includes a different mix of categories. With streaming entertainment providers facing great competition and great opportunity, exclusivity can help in acquiring new users and driving revenue.

Exclusive content contributed heavily to the growth of the TIDAL music streaming service. In February, Kanye West, one of its superstar investors, debuted his album The Life of Pablo on the service. TIDAL’s revenue ranking increased significantly in March as the 30-day free trials of those signing up in February expired. According to App Annie Store Intelligence, TIDAL’s downloads surged in February and a larger surge in revenue followed in March. The service’s pop mirrored a similar one last May in which HBO NOW experienced large gains with the fifth season premiere of its popular series Game of Thrones. We anticipate that the April release of Beyoncé’s Lemonade — which is streaming exclusively on TIDAL — will have a similar downstream benefit in May.

Starting in April The Life of Pablo appeared on other services such as Spotify and Apple Music and became available for purchase from Kanye’s site. While TIDAL’s exclusivity turned out to be short-lived, the service stands to gain in the long term from those who stick around. 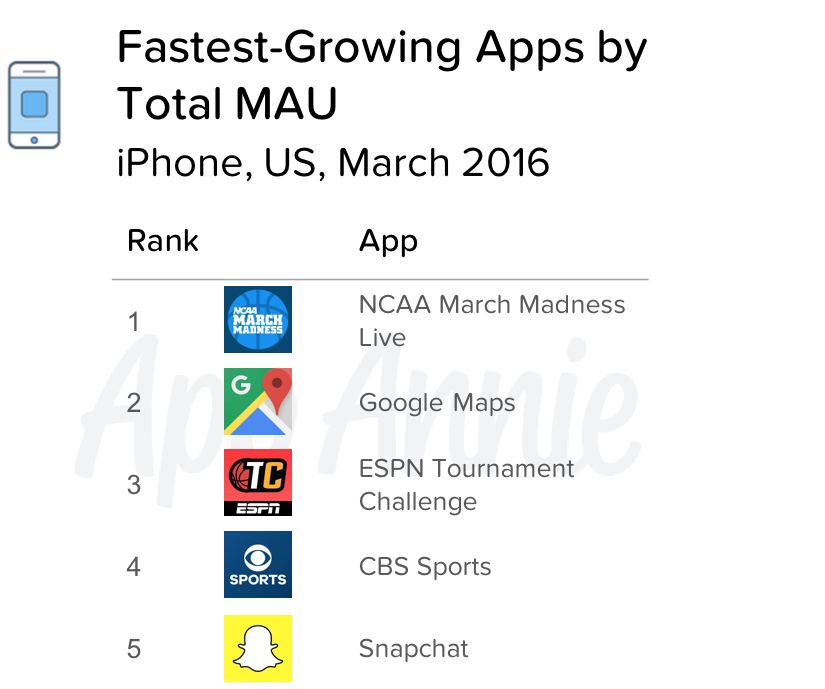 For US sports fans, March belongs to basketball. March Madness — the annual college basketball tournament — led to increased interest in sports broadcasting and companion apps.  As a result, event-specific apps like Turner Broadcasting’s NCAA March Madness Live and ESPN Tournament Challenge were two of the fastest-growing iPhone apps by active users for the month.

Facebook had a hand in coverage of the tournament as well. Turner teamed up with CBS Sports and Facebook-owned Oculus to offer a VR-enhanced version of the app to Oculus Rift owners and offered 2D 180-degree video elsewhere. Such experimentation may come to smartphone-based systems like Google Cardboard in the future.

For the complete list of March’s top apps and app publishers around the world, click the chart above.