Snapchat and imo Shake Up the Most Popular Communication Apps 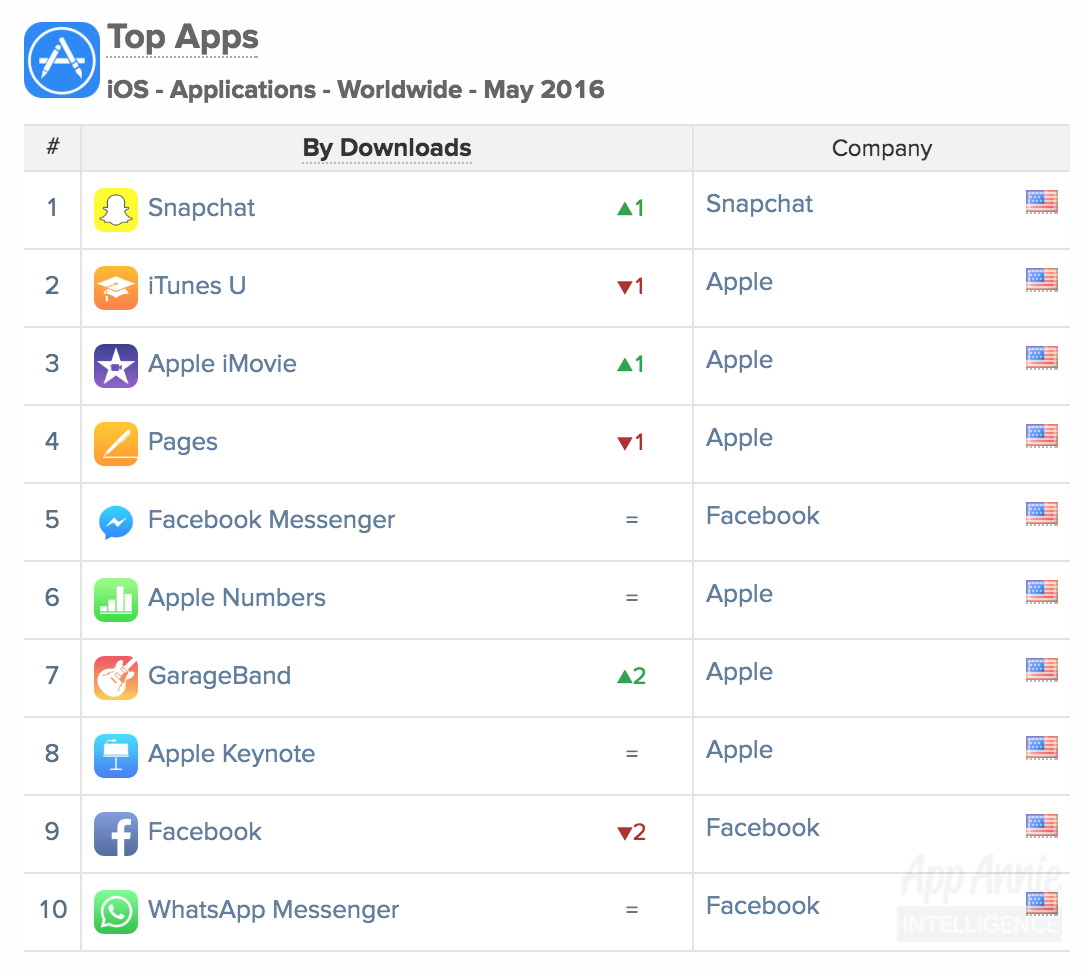 Snapchat is more popular than ever, topping the iOS downloads chart for the first time in a monthly index. While the app grew globally, the largest growth in downloads from a single country came from its country of origin: the United States. As of May 2016 in the US, it was #6 by monthly active users (MAU) in overall iPhone apps. Considering the gridlock of Facebook and Apple’s apps at the top, this is beyond impressive and puts Snapchat at the heels of the largest communication-based apps in the US. 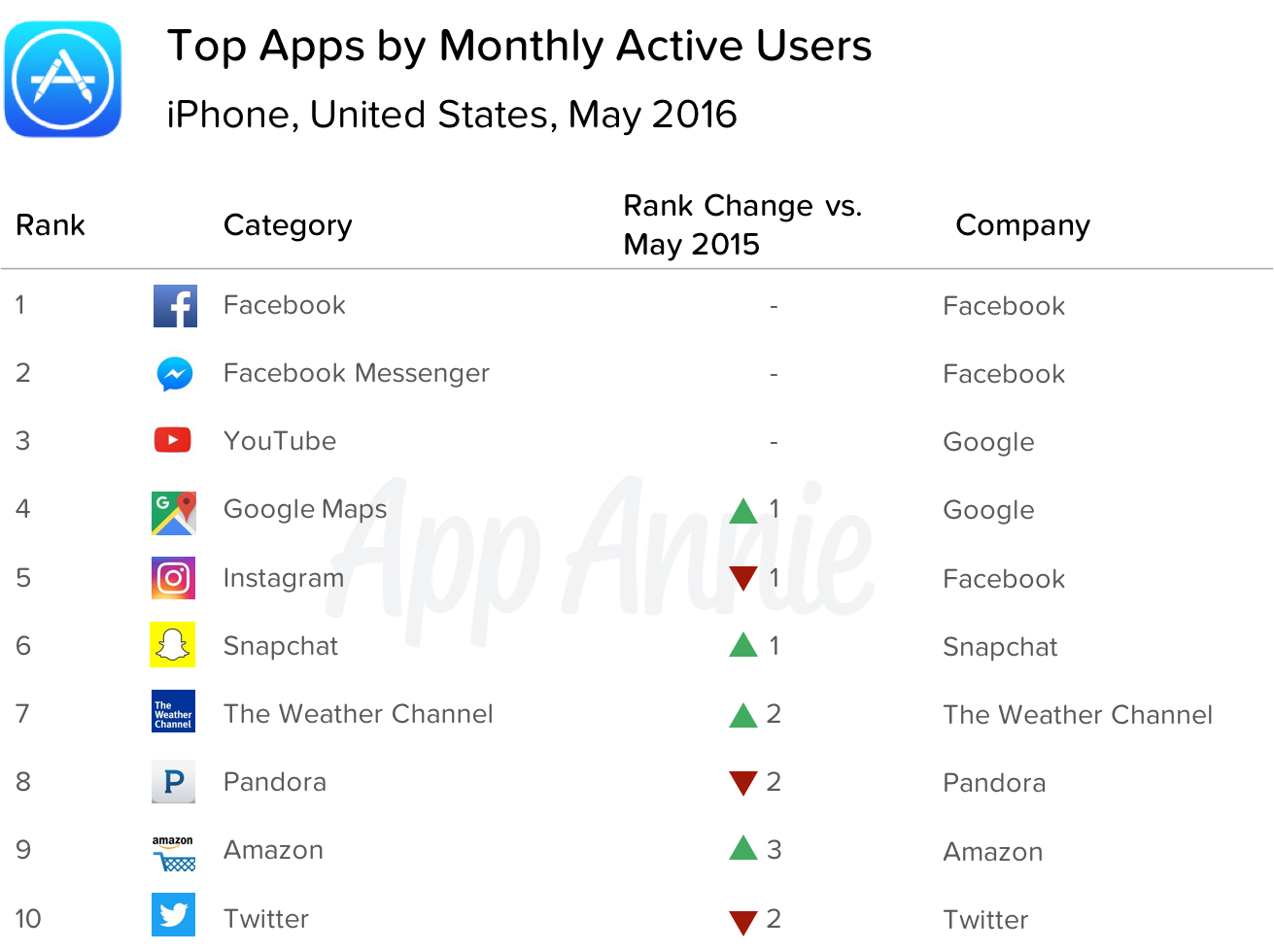 Snapchat closes in on Instagram by MAU in May 2016. Its concentration of younger users offers opportunities for growth among older demographics.

Snapchat grew across the board in all user segments aged 13–24, 25–44 and over 45 years old on iPhone in the past year, but the most growth occurred in the 25–44 age bracket. While 13–24 year-old users are still 2.4 times more likely than the overall population to use the app, this growth in the older age brackets indicates the app’s evolution into a mainstream communication app.

The app’s June redesign to the Discover feature could help with its publisher monetization plan. Repositioning Discover content alongside stories and replacing company logos with a relevant picture, headline and caption may help entice more views. With such an engaged and growing user base, it is no wonder Snapchat’s advertising real estate is drawing attention from major publishers and brands. We look forward to seeing how this redesign plays out for publishers in the months to come.

A New Entrant Emerges in the Top Communication Apps: imo 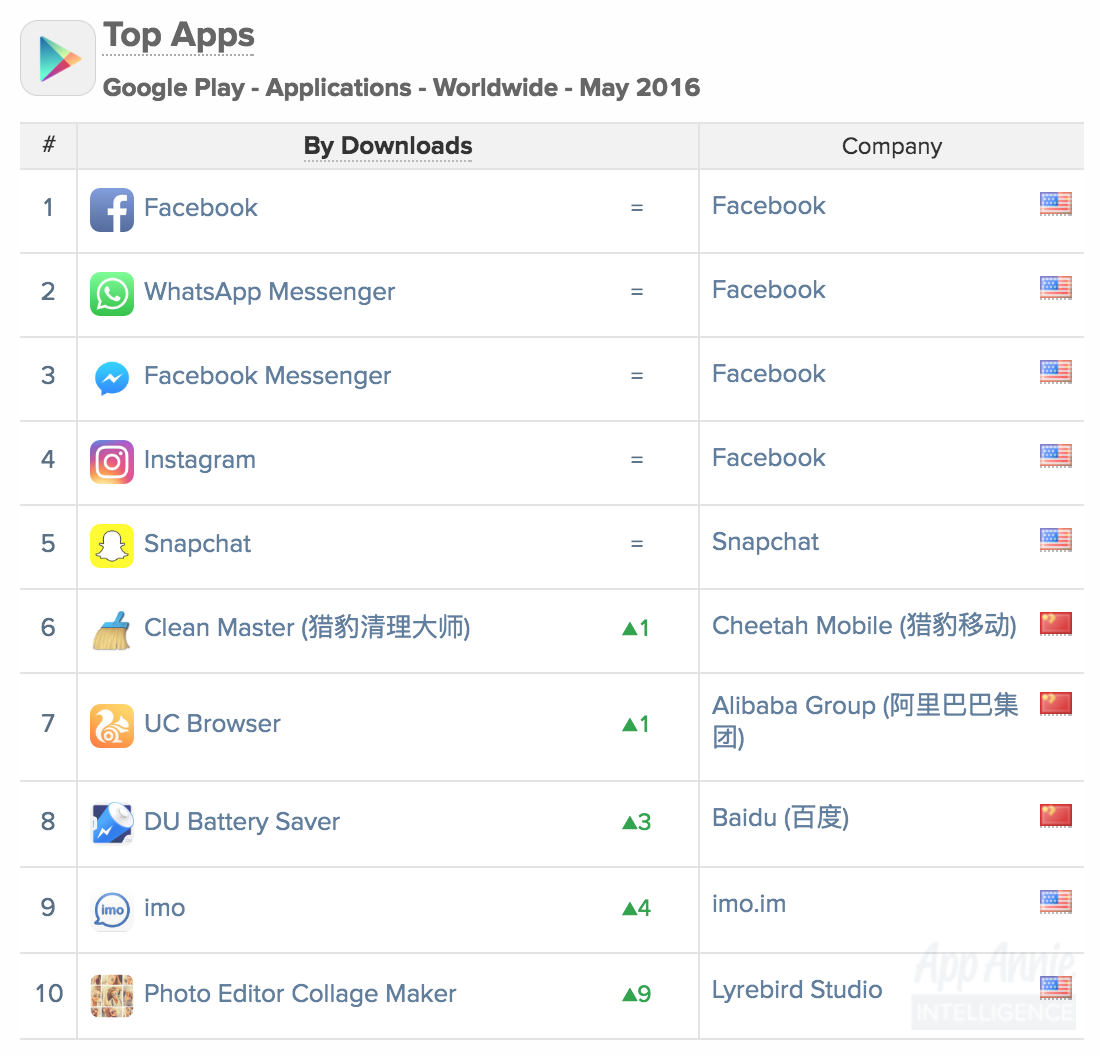 imo debuted at #9 in the top downloaded apps on Google Play, joining the ranks of Social and Communication giants Facebook, WhatsApp Messenger, Facebook Messenger, Instagram and Snapchat. Launched in 2011, this is the first month it broke into either the iOS App Store or the Google Play worldwide top downloads charts.

The app’s download growth was global in nature, but the largest surge of month-over-month downloads came from Brazil and India. Brazil’s ruling to ban WhatsApp for 72 hours in May may have helped account for the spike in downloads of imo in the days that followed as users looked for substitutes to the most popular messaging app in the country. We’re interested to see how monthly usage figures respond in June — specifically, if users revert back to WhatsApp or if they continue using imo. 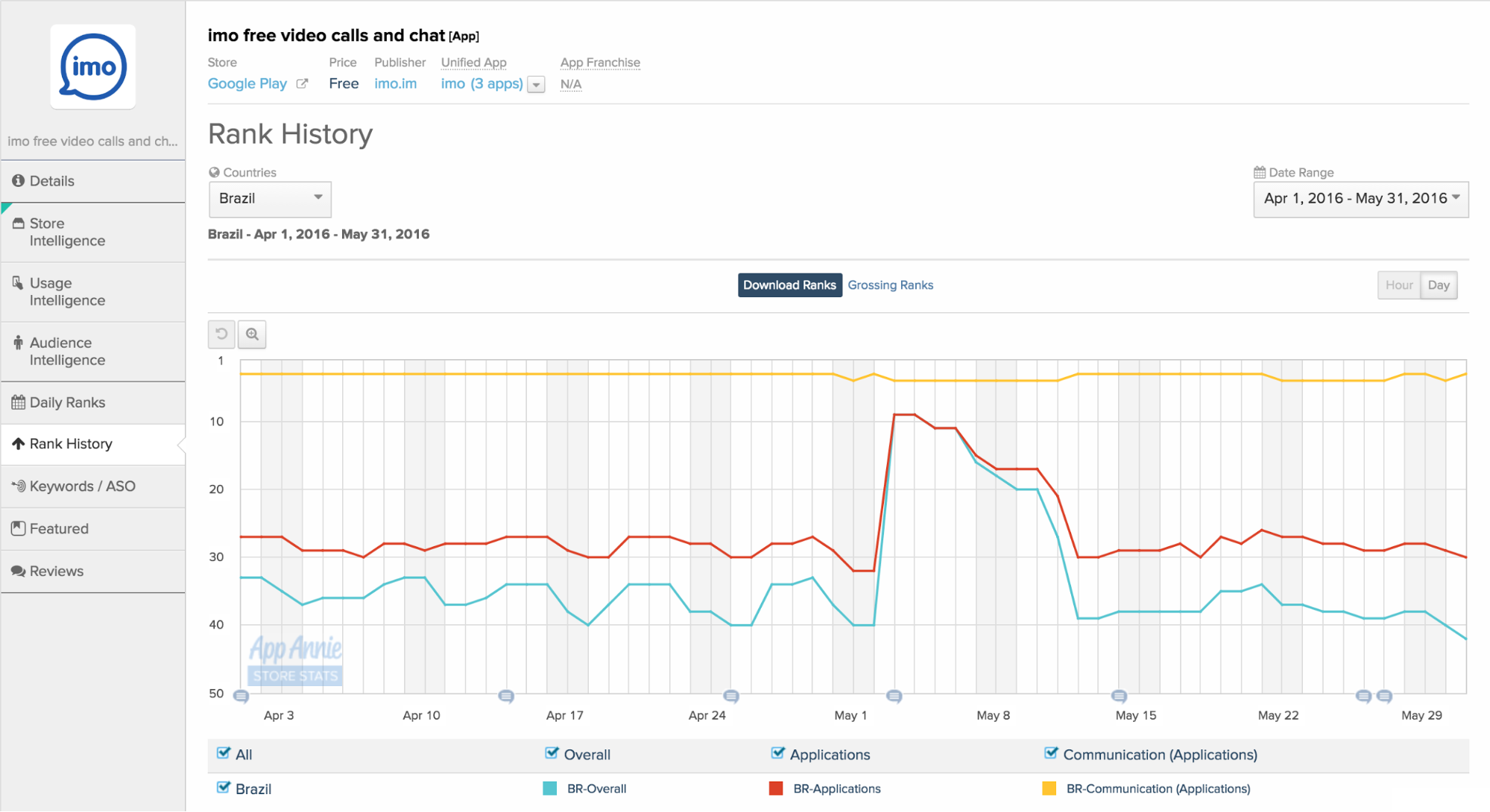 imo shot up the download ranks on May 2, 2016 in Brazil during the temporary ban of WhatsApp and retained that lead for just under two weeks.

Game of Thrones Gives HBO NOW a Boost in Revenue

HBO NOW saw revenue success across both Google Play and the iOS App Store during the month of May, rising to #4 on iOS and #7 on Google Play. Going into May, HBO NOW’s 30-day retention rate was nearly double the average for Entertainment apps on Android phone¹.

HBO NOW’s strong retention rate for apps downloaded in April and its rise up the revenue ranks could be partly attributed to the 6th season of Game of Thrones premiering on April 24. With new episodes continuing each week through June, it is likely we will see continued high retention rates and revenue generation from its subscription model. 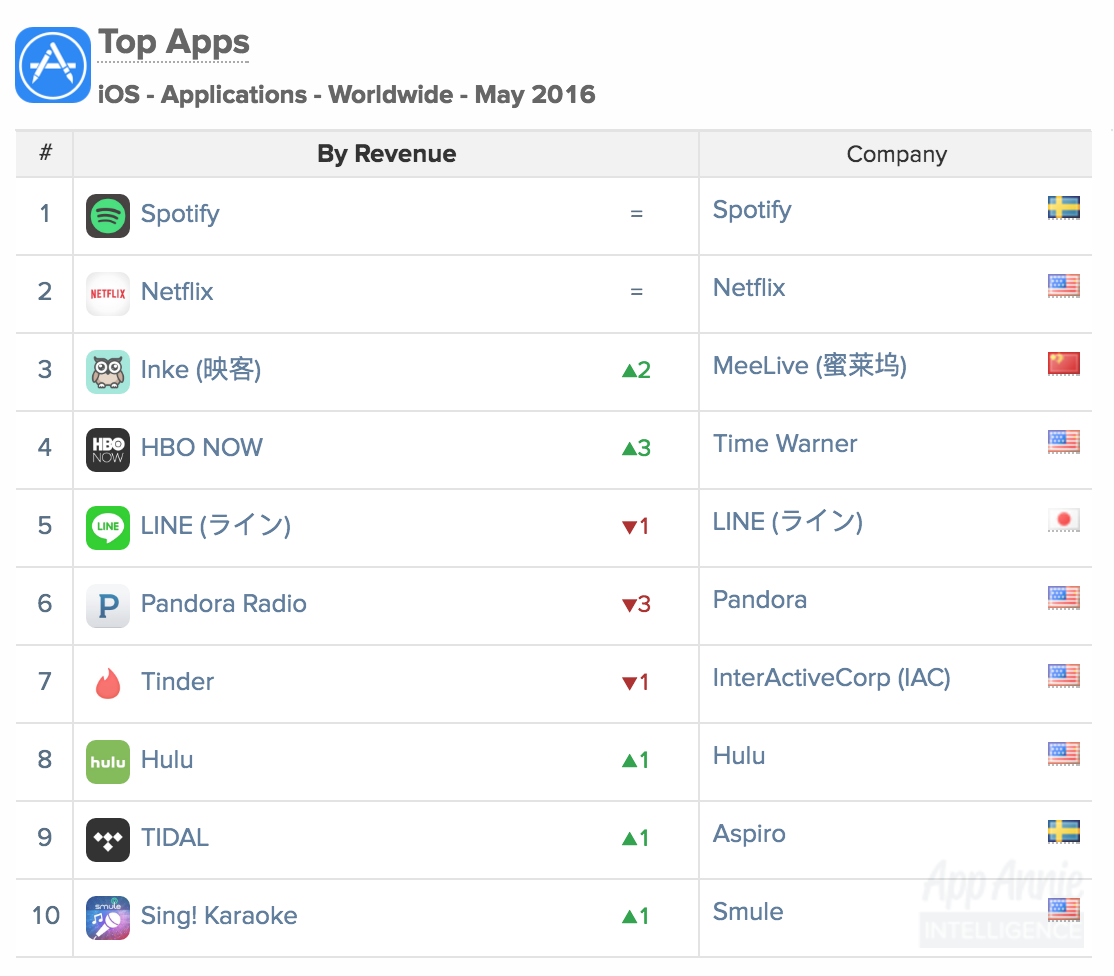 Exclusive content is a tactic used widely by other top music and video streaming apps. On the combined Google Play and iOS chart Netflix emerged as the leader in revenue for video streaming apps supported by its original programming and extensive content library. Upping the ante on its content offerings, the company has announced its first original programming for India as well as its expansion of Disney movies, moves that are likely to increase its global presence and active user base.