The App Annie Apps Index brings you the top-performing publishers and apps outside of games across both the iOS App Store and Google Play based on market data from App Annie Intelligence.  To find out what’s happening in game apps, please check out our October 2013 Games Index.

Most of the top messaging apps such as LINE, KakaoTalk, and WeChat have a business model that encourages users to play freemium games, purchase stickers to use while chatting, and engage with other ecommerce tie-ins.  WhatsApp took a different approach to monetization that embraces a subscription model.  Instead of relying on advertising or creating products and games designed to encourage users to spend money on in-app purchases, WhatsApp Messenger users pay $0.99 per year after their first year.  This subscription business model has been consistent across Android, Blackberry, Nokia, and Windows Phone, but was just implemented on the iOS App Store on July 17th.

Since switching from a paid model where users had to pay $0.99 up front in July, WhatsApp Messenger has consistently been the #3 ranked non-game app by monthly downloads on the iOS App Store.  The messaging app’s consistent download ranking on the iOS App Store mirrors the trend seen on Google Play where it has been the #2 ranked non-game app each month by downloads since the beginning of 2013.  Further, WhatsApp Messenger rose two spots to join the top four grossing apps on Google Play in October.  This level of sustained success contributed to a monthly active user base of 350 million according to a speech given by WhatsApp’s CEO Jan Koum.  Many messaging apps share their total download numbers, but very few announce their monthly active users because it is considered a statistic that indicates user retention.  With a monthly active user base that exceeds Twitter’s by 130 million, it’s no wonder WhatsApp is proud of the community they have built.  If WhatsApp can retain the new users they are adding from the iOS App Store long-term, the publisher could begin reaping the benefits next summer once their $0.99 subscription fees activate.

The October Apps Index saw two iOS customization apps make an impact in the rankings. Wallpapers plus for iOS7 from AppWill customizes the iPhone wallpaper to take advantage of the new features in iOS 7 and became the 8th most downloaded non-game app on the iOS App Store in October.  表情工厂 (Emoticon Factory) from China-based publisher Meitu customizes the sticker experience within Tencent’s popular WeChat messaging app by letting users create animated stickers with their own pictures.  This app propelled Meitu up to #9 in the iOS App Store publisher rankings by downloads.  Whether it’s the background of the phone’s operating system, unique elements within the apps themselves like stickers, or even cases for the outside of the phone, people seem to gravitate towards products that add a personal touch to their mobile experience.

* Tap Nation's apps were removed from the iOS App Store after October 2013.

Meitu climbed 18 spots in October to become the 9th most downloaded non-game publisher on the iOS App Store.  The China-based photo app publisher’s growth in the rankings was primarily driven by 表情工厂 (Emoticon Factory), an app that lets users customize stickers to share with friends on WeChat.  表情工厂 (Emoticon Factory) was released in early October and China’s passion for using expressive stickers in WeChat quickly drove it to become the #1 overall free iPhone app by downloads in China. 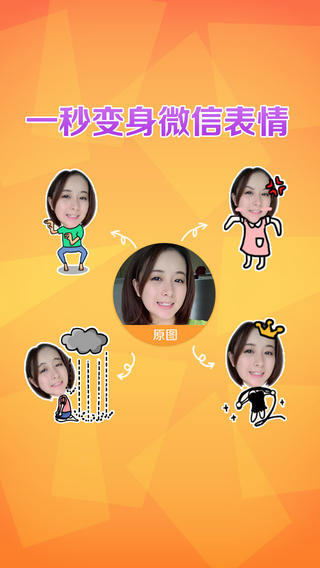 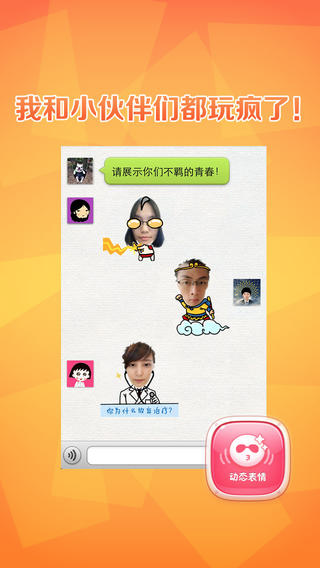 WeChat users can use their own pictures to create custom stickers with Meitu’s 表情工厂 (Emoticon Factory) app.

"With Clean Master, we identified a complex problem and provided our users with a comprehensive and easy-to-use set of features to resolve it. Each week, our international team consults with real users to get their feedback, and this process has led to a consistent rise in ratings and downloads for our app updates. We also heavily leverage R&D to analyze the inner functions of the top 10,000 apps worldwide so we can know for certain what are, and aren't, junk files. Through this, we gained international attention by being the first and only app to enable users to fully delete their Snapchats.

Clean Master 4.0 will be released shortly, and we're very excited as it represents the culmination of months of user feedback to make our users' phones cleaner and faster than ever." - Sheng Fu, CEO of Kingsoft Internet Software, a Kingsoft company

Kingsoft’s battery optimization app, Battery Doctor, also helped them achieve their position in the rankings after a strong month: 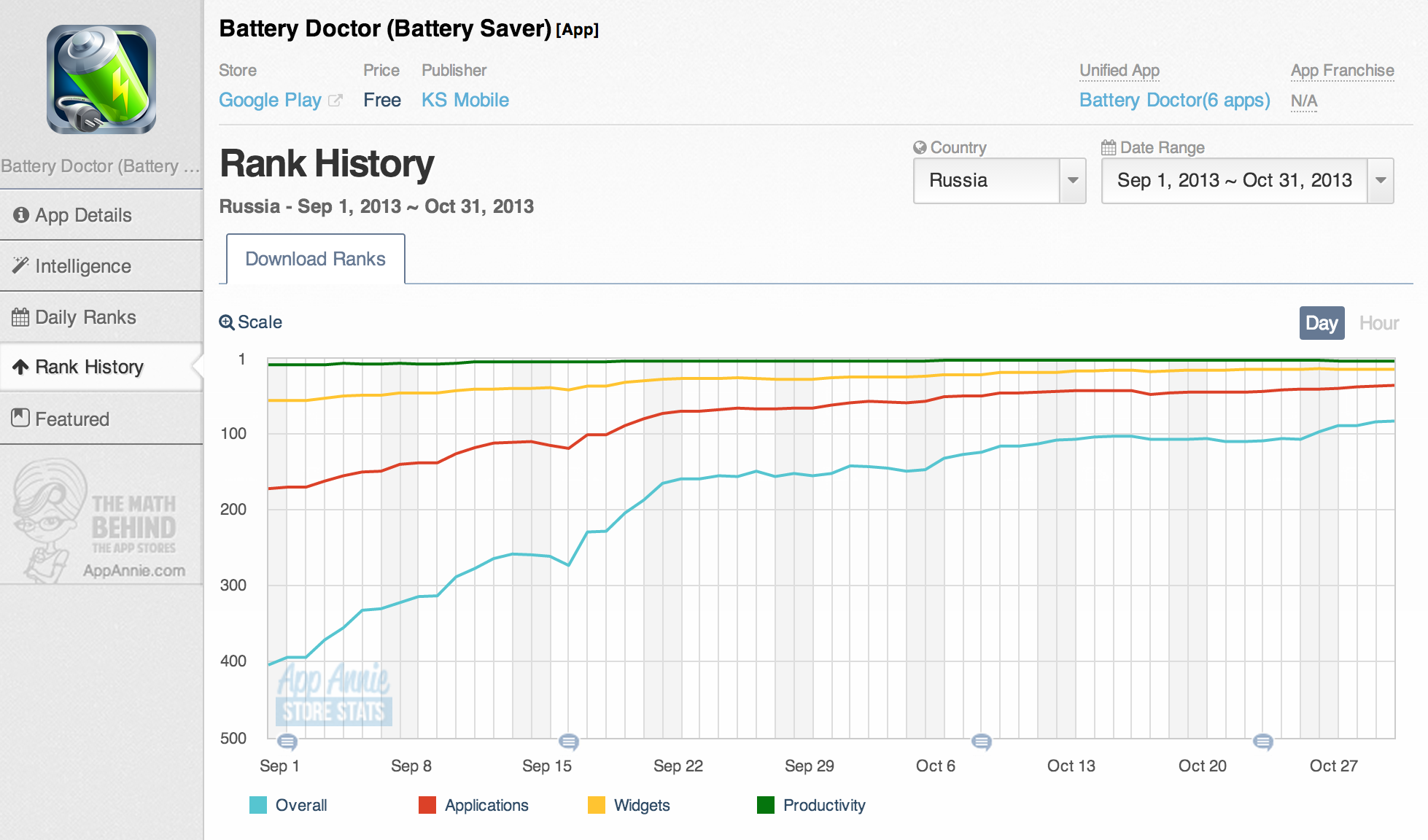 The growth of Kingsoft’s Battery Doctor in Russia and the US helped them become the #8 most downloaded publisher on Google Play.

Baseball has gone into hibernation for the winter, but as one sports season comes to a close, another is just starting.  The National Hockey League (NHL) kicked off hockey season in the US and Canada on October 1st.  The NHL GameCenter app drove NHL Interactive up 201 places in the rankings to become the #7 top grossing publisher on the iOS App Store.  NHL GameCenter uses the same business model that Major League Baseball used for their MLB.com At Bat app.  Hockey fans can upgrade to NHL GameCenter Premium for $9.99 to listen to games on the radio, or they can go for the NHL GameCenter LIVE upgrade for $169.99 that lets them stream games live. From season to season, we consistently see that sports really does monetize on apps.

LINE maintained their position as the top grossing non-game publisher on Google Play in October.  They have held this position in the top grossing non-game publishers on Google Play since spinning off from NHN in the April Apps Index.  Jun Masuda, LINE’s Chief Strategy & Marketing Officer, spoke with App Annie about their approach to building a platform that goes beyond messaging:

"It's a great pleasure to have maintained our high ranking as a top grossing publisher for both the Google Play and iOS App Store. We believe this is because we caught the smartphone wave and continue to provide value as a communication tool. We go beyond being a simple messaging app, offering text-based communication with stickers that express emotion, voice and video calls, and family apps including LINE GAME. As these services expand, we're also creating a new industry-leading business model.

Through app improvements and the development of new content and services, we want LINE users across the world to have good and enriched communication." - Jun Masuda, Chief Strategy & Marketing Officer of LINE

WhatsApp climbed four spots to become the #5 top grossing publisher on Google Play in September.  WhatsApp’s growth had them join LINE, Kakao, and GREE to give messenger app publishers four of the top five positions.  The only new publisher in October’s Top 10 was UK-based MagazineCloner.  MagazineCloner is a digital publishing platform that makes it easy to quickly publish magazines across multiple stores and formats.  MagazineCloner’s growth made October the second month in a row to feature a magazine publisher in the top revenue rankings after Condé Nast was the 8th highest grossing publisher on the iOS App Store in the September Apps Index.

Major US tech companies continued to dominate the iOS App Store download rankings as Google, Facebook, Microsoft, and Apple accounted for 7 of the Top 10 apps.

AppWill’s Wallpapers plus for iOS7 joined the Top 10 after their update in late September that added wallpapers that fully utilize the new features in iOS 7.  The update coincided with the growth of the app’s downloads in a number of East Asian countries, including China, Hong Kong, and Singapore.

Clean Master earned the #5 spot in the Google Play download rankings for October.  The September Apps Index featured the performance optimization app’s growth in India, Indonesia, and Brazil, but October saw substantial gains in a number of Western countries. 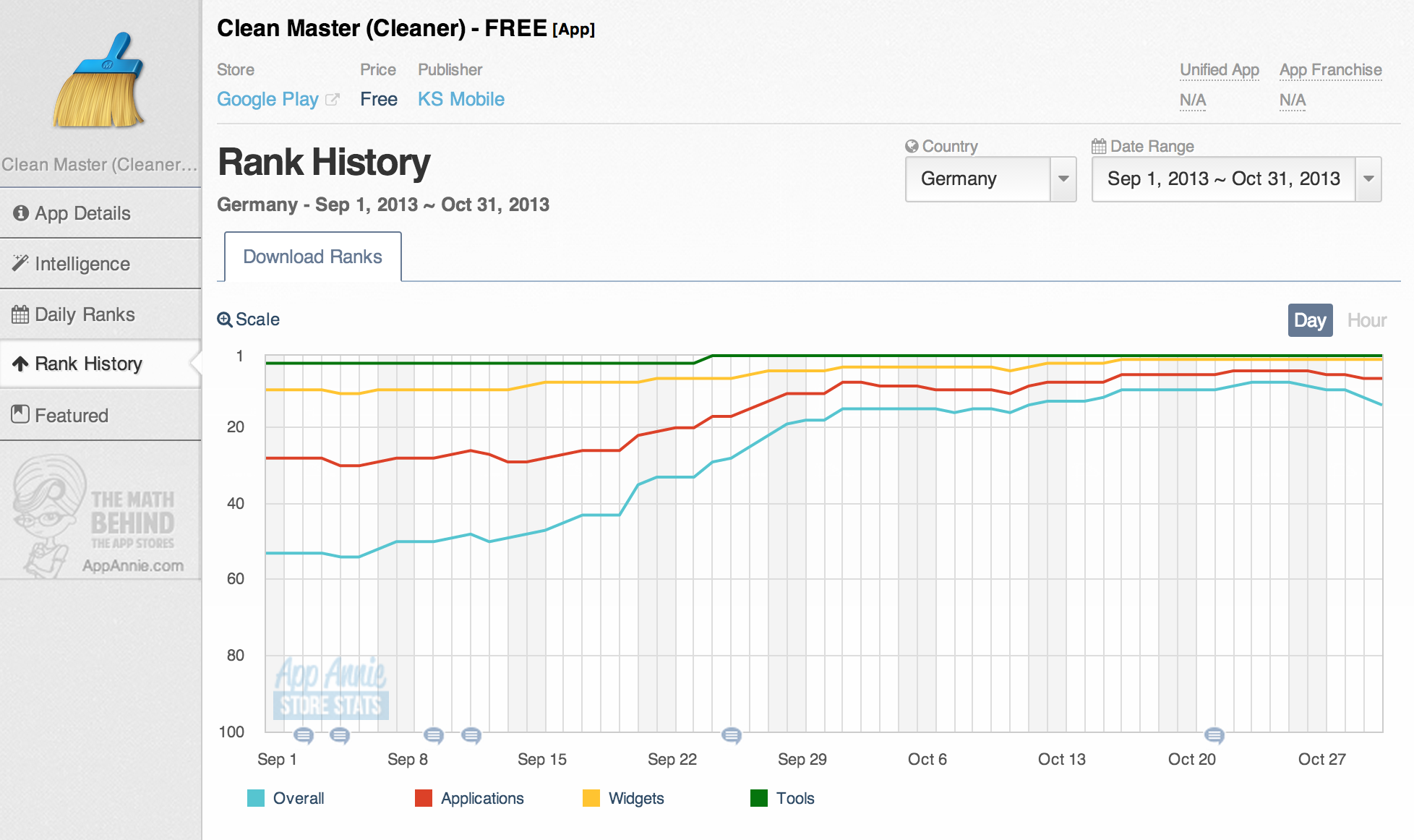 Clean Master’s growth from September to October was fueled by downloads in a number of countries, including Germany, Russia, the US and Mexico.

While iOS apps by revenue have traditionally been dominated by social networking apps, one sports app stood out. NHL GameCenter became the #5 top grossing app on the iOS App Store.  The app’s performance was driven by a surge of hockey fans in the US and Canada who upgraded the app to packages that let them stream live radio and video feeds of their favorite team’s games.  NHL GameCenter’s performance is impressive, but time will tell if it can match the performance of MLB.com At Bat, which ranked in the Top 10 grossing apps on the iOS App Store from March through September.

Although WhatsApp Messenger’s recent growth in monthly active users won’t translate to revenue until they have been on the app for a full year or are up for renewal, the messenger app’s loyal user base has already translated into an increase in revenue that sent them to #4 in the Google Play revenue rankings.  The app that made the biggest jump to land in the Top 10 in October was Sygic: GPS Navigation and Maps.  Its rise in the rankings to #10 was driven by a particularly strong month in Europe: 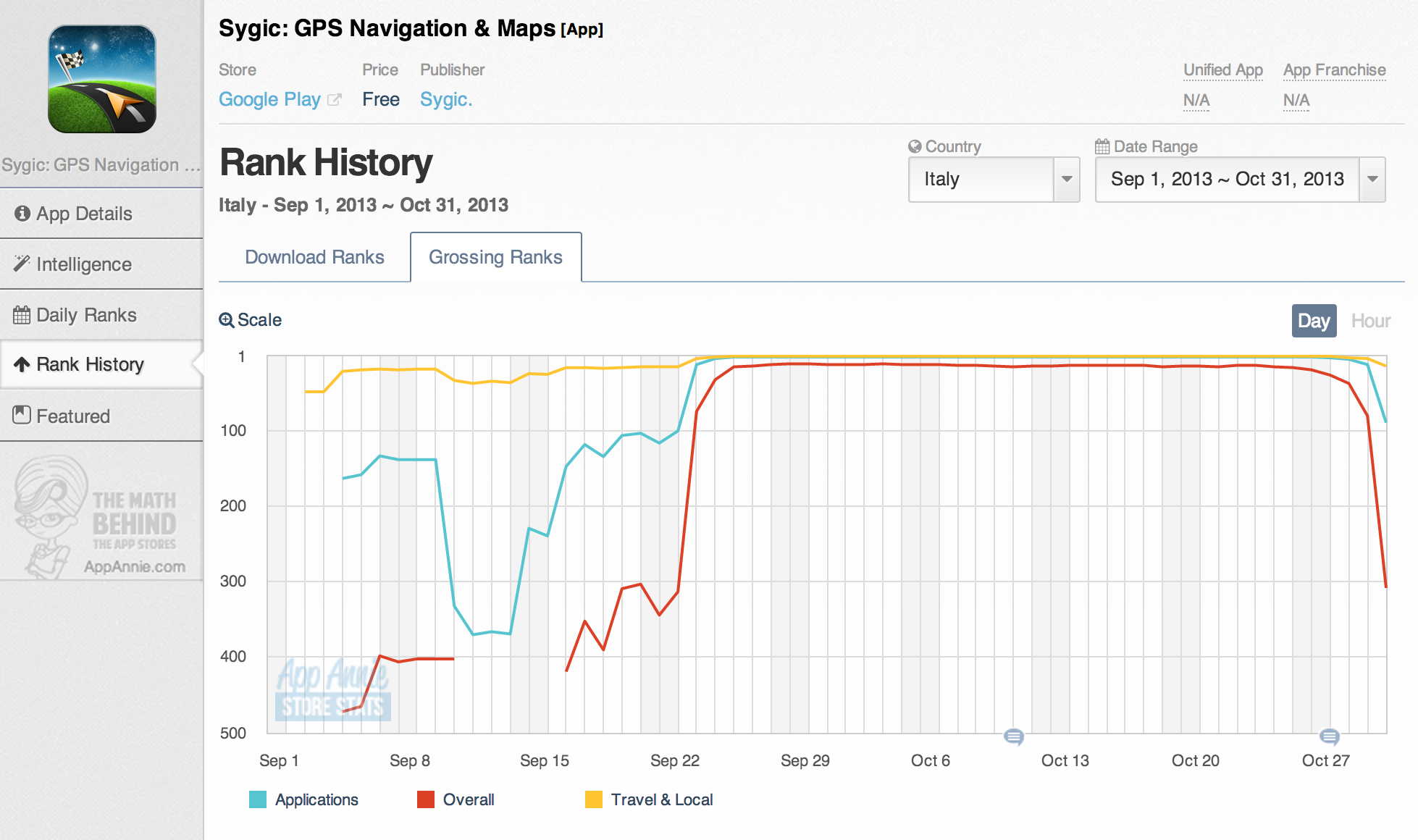 Sygic saw a dramatic rise in its Google Play revenue rankings in Italy, Germany, the Netherlands, the UK, and other countries.

For those of you who also are looking for an update on top apps in gaming, please check out our October 2013 Games Index.