The App Annie Games Index brings you the hottest mobile gaming properties across both the iOS App Store and Google Play. To find out what’s happening with apps outside of games, please check our March 2014 Apps Index.

The information contained in this report was compiled from App Annie Intelligence, the top market data solution for the app store economy. To see how our industry-leading app store download and revenue estimates can help guide your critical business decisions, take a tour or request a demo today.

This Index report also uses App Annie’s exclusive DNA, providing unparalleled insights into the major players and trends in the app stores. App Annie DNA creates the only rankings that incorporate the complete set of companies’ subsidiaries and related publishing accounts. In addition, each game’s downloads and revenues are ranked using all versions of the game, regardless of platform compatibility, pricing or language. App Annie DNA is available in App Annie’s free Store Stats, and as part of App Annie Intelligence.

Tencent Becomes a Dominant Force on the iOS App Store

Four different versions of Japanese publisher gumi’s RPG Brave Frontier launched within three months on Google Play in late 2013. A localized version was released for each of the Japanese, Korean, Chinese (published by Chukong), and English-speaking markets. In March, Brave Frontier reached the Top 10 games by monthly Google Play revenue, showing particularly strong growth in Japan and the United States. In doing so, it became one of very few titles to find considerable success in both Eastern and Western markets simultaneously. gumi’s CEO, Hironao Kunimitsu, spoke to App Annie about their success and ambitions for the game:

"Our success in the international markets really boils down to the hard work of our local offices and their staff, without it, we wouldn't have been able to achieve the success we have. With regard to our future prospects, the iOS version of Brave Frontier was released to the Chinese mainland market on 30th of April this year, and the Android version is close behind so we'll be begin our marketing push in the area soon.  Not to mention our European launch is close at hand too.  All this activity is aimed at making sure we hit the global Top 5!" - Hironao Kunimitsu, CEO of gumi

The Q1 2014 Market Index noted that growth in the iOS App Store was primarily driven by China, with Tencent’s game apps playing an influential role. Illustrating this point, Tencent hit the #1 rank for iOS game publishers by monthly downloads after residing in the top five since September 2013. App Annie Intelligence shows that its continued gains in January were largely propelled by the release of new titles, the most prominent being 雷霆战机 (Thunder Fighter) - an aircraft-based shooter that incorporates card battle elements and stage-based gameplay. Tencent also released a version of 神魔之塔 (Tower of Saviors) for WeChat. App Annie’s DNA shows that other versions of the game, originally published by Mad Head, proved popular in markets such as Taiwan and Hong Kong, but made little impact in China. Tencent’s release of the game utilized the strength of the WeChat gaming platform to hit the top ranks in China when released at the start of March.

Other publishers making significant gains in March were also boosted by newly released titles. Mediocre’s Smash Hit proved worthy of its title, landing the publisher in the top five for monthly iOS game downloads. Glu also returned to the Top 10 in March, following the release of Frontline Commando 2 in early March.

Outfit 7 has held a prominent position in both the Games Index and Apps Index recently, thanks largely to the success of its Talking Tom franchise. The gains made on Google Play in March demonstrate the publisher’s strength outside of this franchise, as the release of Groove Racer contributed to its rise. Groove Racer has been available on the iOS App Store since June 2013, but only came to Google Play in mid-March 2014. The title performed particularly strongly in the Russian market. 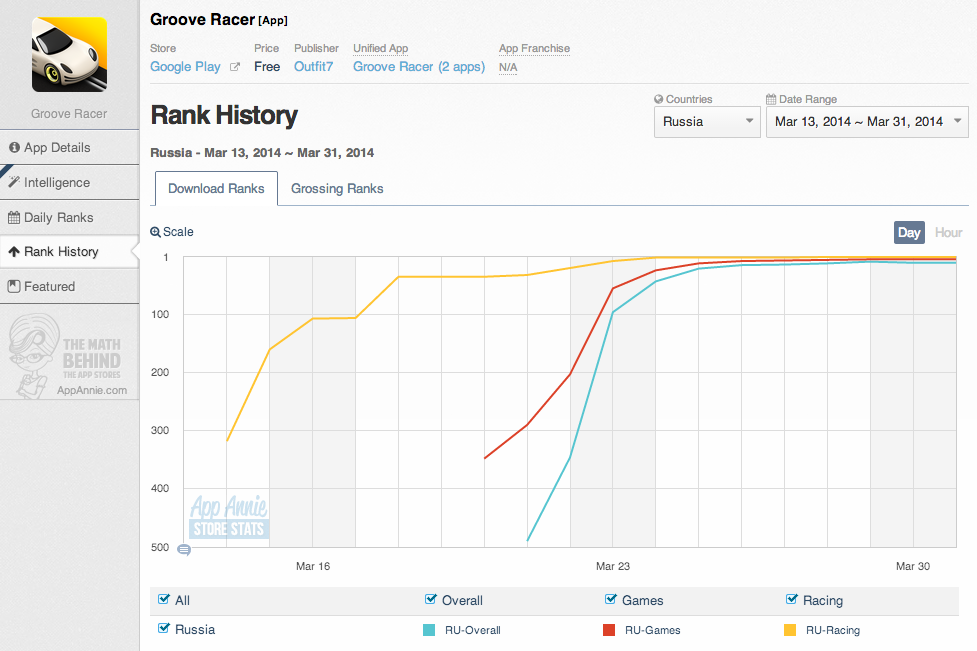 Outfit 7’s Groove Racer climbed the ranks in Russia after its March release on Google Play.

LINE announced that its LINE GAME series surpassed 300 million cumulative downloads during March. Its success continued throughout March, with the release of LINE Rangers helping move LINE into the top five game publishers by Google Play downloads. As noted in the February Games Index, Thailand and Taiwan are becoming increasingly important markets for LINE’s gaming efforts. The release of LINE Rangers illustrated this further, as the game reached the top ranks in both these markets.

The Top 10 game publishers by monthly iOS revenue remained relatively stable in March, with only Kabam seeing rank gains. App Annie Intelligence reveals that this rise was driven by the addition of RPG Castle Age and crime MMO Underworld Empire to Kabam’s game lineup. Both these games were incorporated into Kabam’s portfolio following its acquisition of Phoenix Age in March.

Although not affecting the rankings notably in March, publishers in the top five made important moves recently to cement their positions for the future. Supercell released combat strategy game Boom Beach worldwide in late March. As with Supercell’s other titles, it remained iOS only at launch, but has made a strong start in most markets worldwide. King and Tencent will also hope to enhance their positions with a recently announced deal to bring Candy Crush Saga to a wider audience in China using the WeChat platform.

GAMEVIL joined the Top 10 game publishers by monthly Google Play revenue in March, driven primarily by fantasy adventure game 별이되어라! (Dragon Blaze) for Kakao. The title rose rapidly in the rankings in South Korea after its release in mid-February, and remained in the top ranks throughout March. Although Dragon Blaze is currently limited to South Korea, GAMEVIL announced a Q3 2014 worldwide release at Game Developers Conference 2014.

Another South Korean company, CJ Group, moved up in the Google Play publisher revenue rankings in March. This coincides with news of Tencent’s $500 million investment for a 28% stake of CJ Games (a division of CJ Group). The investment will strengthen the content available on Tencent’s WeChat gaming platform, and also further extend its influence outside of China. This also represents a significant shift for Korea game companies, who have generally used Qihoo 360 to take content to China. However, CJ Group are now working directly with Tencent to bring their games to the WeChat platform.

Although gains for Flappy Wings indicate that Flappy Bird-mania had not completely diminished in March, it was primarily new content that made a big impact in monthly iOS game downloads. Leading the charge was Mediocre’s Smash Hit, which provides a unique combination of elements from the endless runner and first person shooter genres. It also utilizes an “other worldly” environment, a feature that has proved popular in mobile games recently, particularly with the release of Monument Valley. Smash Hit was launched in early March, and featured on the iOS home page extensively throughout the month. The game performed particularly strongly in the United States, China, and United Kingdom.

Glu’s third person shooter Frontline Commando 2 also proved a hit, particularly in China. Like Smash Hit, it also featured on the iOS home page extensively in March following its release early in the month. Numeric puzzle game 2048 followed a different path to success, as it gained considerable attention while only featuring on the iOS home page of a few, generally smaller, markets in March. However, it still gained considerable traction in both the United States and China.

The final newly released game to reach the Top 10 in March was Tencent’s 雷霆战机 (Thunder Fighter). The aircraft-based shooter hit #1 for downloads in China on release, and stayed there for the remainder of the month. Despite a release date in late March, 雷霆战机 (Thunder Fighter) still received enough downloads to reach the worldwide Top 10. This highlights the growing influence of China and Tencent’s WeChat platform on the worldwide iOS gaming market, as highlighted in the Q1 2014 Market Index.

Smash Hit also featured prominently in Google Play downloads in March. The game featured on the Google Play home page throughout March, though generally less extensively than on the iOS home page. However, it grew steadily in the United States, eventually hitting the #1 rank for Google Play game downloads. 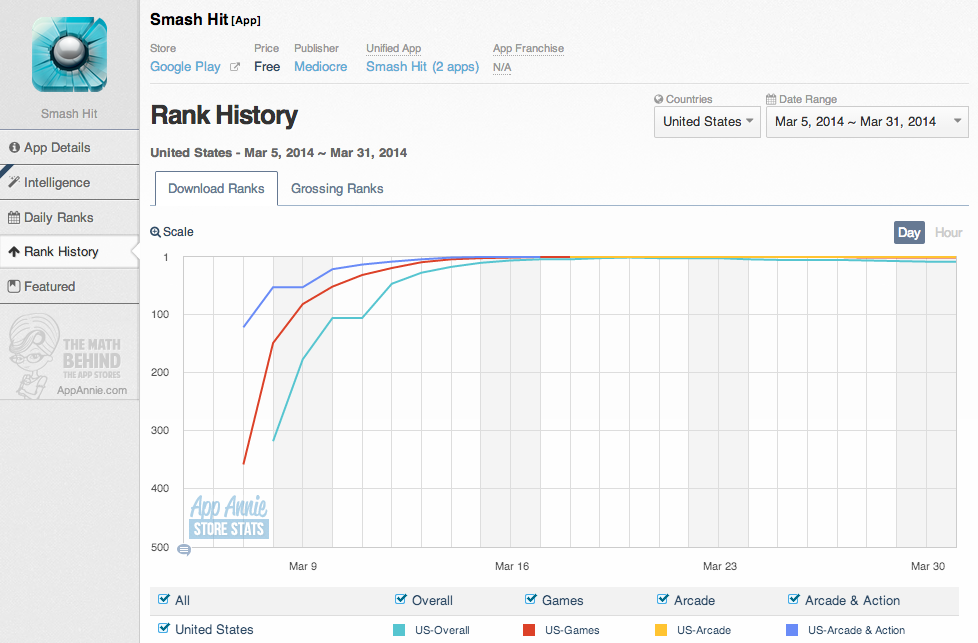 Smash Hit gathered momentum in the United States to reach the top ranks by the middle of March.

The iOS monthly game revenue rankings further reveal the increasing influence of Tencent on the worldwide charts. As shown in the Q1 Market Index, China is currently driving revenue growth in the iOS App Store, and Tencent is the leading component of this growth. WeChat games have successfully expanded social gaming in China, and introduced a payment top-up system that encourages multiple transactions per user. In March, three titles for its WeChat platform appeared in the Top 10 iOS games by monthly revenue – 全民飞机大战 (Massive Plane Warz), 天天飞车 (Flying Carz), and天天酷跑 (GunZ Dash). As iOS revenue continues to grow in China, it is likely that Tencent will continue to have a growing presence in the top charts. 天天飞车 (Flying Carz) saw the largest rank gains in March, experiencing gains following an update in late March that introduced a new online multiplayer Grand Prix mode, among other new features.

On Google Play, Brave Frontier entered the Top 10 games by monthly Google Play revenue for the first time in March. The game has a number of variations, localized specifically for different markets. These have been aggregated for the Index rankings using App Annie DNA. Brave Frontier’s growth in March was largely driven by the English language version in the United States, and ブレイブフロンティア, the Japanese version, but has reached the top grossing ranks across much of Southeast Asia. 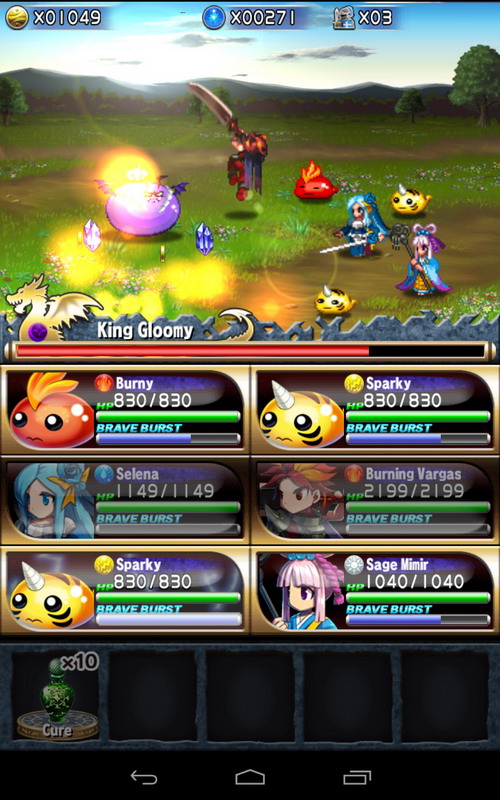 Supercell’s Hay Day continued to climb, entering the top five games by monthly revenue in March. As a result, four of the top five games by monthly revenue are now consistent between iOS and Google Play. The one exception on Google Play was 애니팡 (Anipang) 2, which continued to perform well in South Korea in March. The success of the franchise has paid off for publisher SundayToz, which received a $112 million dollar investment from hardcore online game publisher Smilegate for a 20% stake, to help take the game to a wider audience.

For those of you who also are looking for an update on top apps other than games, please check out the March 2014 Apps Index.